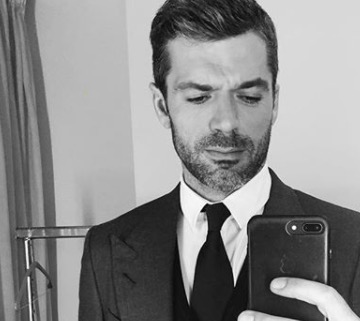 Luca Argentero, born in Turin in 1978, he is a well-known Italian actor. He began to make himself known by participating in the third edition of Big Brother. After that he started working in film and entertainment. After a failed marriage he is currently engaged to actress Cristina Marino and on 20 May 2020 he is he became the father of Nina Speranza Argentero and on 6 June he married Cristina Marino. He will star in the Sandokan TV series in the role of Yaniz alongside Can Yaman.

Luca Argentero was born in Turin on 12 April 1978, by Guido, builder and ski instructor and Agata, a housewife of Sicilian origins. Luca has one sister named Francesca who looks a lot like him and, together with the family, grow up in Moncalieri. After graduating from high school he enrolled in the Faculty of Economics and Commerce at the University of Turin and at the same time he is a barman in a nightclub. Reaches notoriety in 2003 when he decides to participate in the third edition of the reality show Big Brother ranking third. At the casting he was proposed by his cousin Alessia Ventura in those days Letterina from Gerry Scotti’s Passaparola program. He then worked as a model and made his debut as an actor in 2005 in the television series “Carabinieri” (where he starred with Manuela Arcuri and Gabriele Corsi), in the role of Marco Tosi. From here began a long and bright career that still lasts today.

Luca Argentero has been engaged to the actress since 2017 Cristina Marino he met during the filming of the film “Christmas in the Caribbean” in which they both starred. The two actors have always declared that their love story began after the end of Luca’s marriage with Miryam Catania. In December 2019 Luca Argentero and Cristina Marino announced they were expecting their first daughter. On 2020 May 2020 Cristina and Luca become parents of Nina Speranza Argentero, their first daughter. The announcement was made on Instagram as you can see in the photo below. Luca Argentero and Cristina Marino get married by surprise in Città Della Pieve on 6 June 2021.

In July of 2009 Luca Argentero he married the actress and voice actress Myriam Catania after five years of engagement. After a long love story, the two actors they separated in 2016. The gossip newspapers at the time were unleashed by attributing the cause of the separation to Luca’s acquaintance with Cristina Marino on the set of the film “Christmas in the Caribbean”. The news was rejected by Luca who declared that his marriage had already ended some time ago. The following year, 2017, Luca gets engaged to Cristina Marino and in December 2019 they announce to be expecting a baby girl born on May 20, 2020.

Luca Argentero is an actor and also a TV presenter. He became known in 2003 when he took part in the third edition of the reality show Il Grande Fratello broadcast by Canale 5, where he ranks third and where he receives great public appreciation. Later he works as a model, poses for the monthly magazine Max which launches him as a sex symbol. At the same time he engages in the study of acting and in 2005 he made his debut as an actor in the television series “Carabinieri”. In 2006 he made his debut in the cinema with the film “At our home” by Francesca Comencini. He returns to the cinema in 2007 in the film “Saturno contro” by Ferzan Ozpetek, together with Ambra Angiolini. In 2009 at the David di Donatello he was nominated for best leading actor for the film “Diverso da chi?” and in the same year he acted in a film directed by Michele Placido, The big dream, with Laura Morante and Brenno Placido. In 2010 he made his debut in the theater with the play “Shakespeare in Love”. In 2011 he became host of the famous TV show “Le Iene”. Between 2013 and 2014 he plays the role of juror in the school of Amici di Maria De Filippi. In 2021 he will participate in a Fiction on Sandokan (created from Salgari’s novels) with Can Yaman and Alessandro Preziosi. He will play Yaniz one of the main characters of the series and right arm of the protagonist.

He officially joined the cast of the next television series: The ignorant fairies. The series is a television adaptation of the well-known 2001 film. The cast will feature, among others: Cristiana Capotondi, Eduardo Scarpetta, Ambra Angiolini and Filippo Scicchitano.

Amadeus announced that Luca Argentero will be one of the co-hosts of the Sanremo 2021 festival broadcast from 2 to 6 March. Luca together with Alice Campello, Matilda De Angelis and Elodie. Also on stage Achille Lauro and Fiorello, present in all the evenings of the festival with their moments of fashion, music and entertainment.

Luca Argentero is one of the most popular Italian actors. After the experience at the reality show Il Grande Fratello he undertakes the study of acting and in 2006 he made his debut on the big screen in the film “A casa nostra by Francesca Comencini”. In 2007, his convincing interpretation of a homosexual boy in the film “Saturn Against” by Ferzan Ozptek earned him the Diamond Award for Best Supporting Actor. In 2009 he obtained his first candidacy for the David di Donatello as best lead actor in the film “Different from whom?” by Umberto Carteni. Later he took part in the films “Il grande sogno di” by Michele Placido and “The woman of my life” by Luca Lucini. International fame came to him in 2010 for his role in the film “Eat, Pray, Love” directed by Ryan Murphy and played by Julia Roberts.

Luca Argentero, given his very successful career he is highly sought after as an actor and there are numerous films and the show he plays. In 2011 he covered the role of Tiberio Mitri in the television miniseries “The champion and the Miss” directed by Angelo Longoni. In the same year he was chosen as presenter of the show “Le Iene” alongside Ilary Blasi. Later he starred in Michele Placido’s “The sniper” and then in the film adaptation of the homonymous book by Alessandro D’Avenia “White like milk, red like blood” where he plays with Flavio Insinna and Filippo Scicchitano. In 2013 in 21014 he participated as a juror in the program Amici di Maria De Filippi. Also in 2014 he starred in the film “Fratelli Unici” alongside Raul Bova, Carolina Crescentini, Giusy Buscemi and Miriam Leone. In 2015 he made his presence in the film “Opposite poles” by Max Croci and in “Christmas in the Caribbean” by Neri Parenti where he met his current partner Cristina Marino. In 2016 he acted in “In your place” by Max Croci and in 2018 in “What are you doing on New Year’s Eve” by Filippo Bologna. In 2019 he starred in “Copperman” by Eros Puglielli and in “Io, Leonardo” by Jesus Garces Lambert. In 2019 and 2020 he is the protagonist of the fiction of Rai Uno “Doc – In your hands” together with the actors Pierpaolo Spollon, Giovanni Scifoni, Matilde Gioli and Gianmarco Saurino.