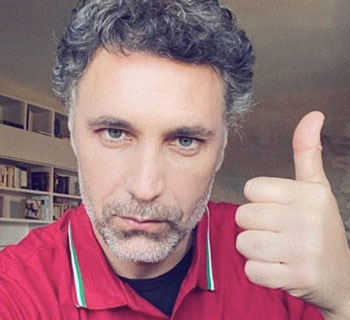 Raoul Bova, born in Rome in 1971 and is a actor, director and former swimmer. After leaving his career as a swimmer he dedicated himself at the cinema and on TV and is considered by the female audience as one of the sex symbols of Italian cinema. He has been engaged to his partner for years Rocio Munoz Morales.

Who is Raoul Bova?

Raoul Bova was born in Rome on August 14, 1971, the son of parents with Calabrian and Campania origins. He graduates at the “Jean Jacques Rouseau” Teaching Institute. From an early age he dedicated himself to swimming and at the age of fifteen he won the youth championships in the 100 meters backstroke. After graduation, he enrolls to the Isef but does not finish the course. He carries out his military service in the Bersaglieri corps where he assumes the position of swimming instructor at the army non-commissioned officers school.

After his military service he enrolled in Beatrice Bracco’s acting school to pursue an acting career. After a few small parts in several films he gets his first leading role in the film “A little big love” by Carlo Vanzina in 1993. From here start a myriad of interpretations that give him a great national and international success. Thanks to his statuesque physique as a former swimmer and his charm he is universally recognized as one of the sex symbol of Italian cinema.

Raoul Bova has about 750,000 followers on Instagram. Posts and Stories Raoul’s favorite means of communicating with his followers are quite frequent. 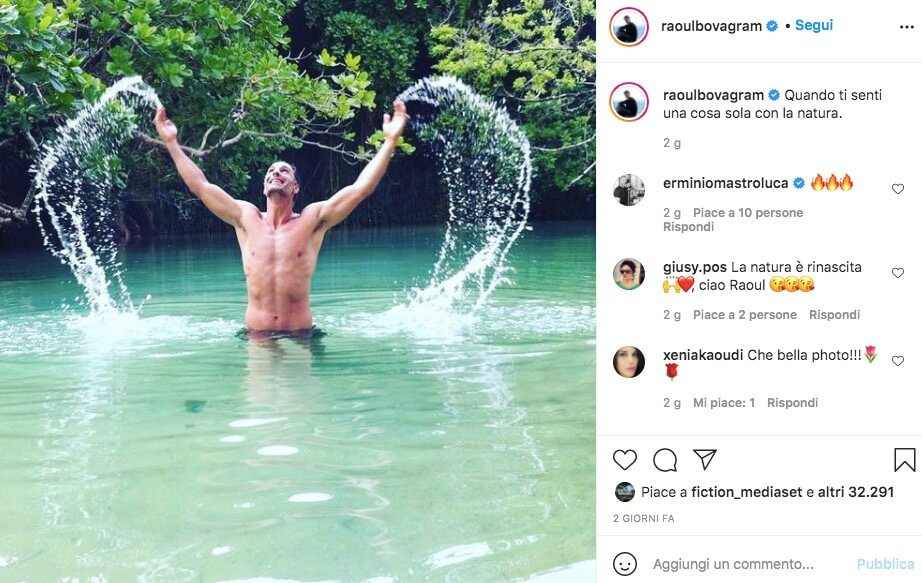 Raoul, after a past as a professional swimmer, enrolled in the Beatrice Bracco acting school to undertake the work of an actor. In addition to the talent for acting Raoul is endowed with charm and beauty who decree it as a sex symbol of Italian cinema. Impossible to list all the numerous films and TV series starring Raoul Bova, we only mention a few. After a few small roles in several films, he gets his first leading role in 1993 in the film “Piccolo grande amore” by Carlo Vanzina. In 1996 he is the protagonist of the detective cult “Palermo Milan one way”. On TV he participates in the famous fiction “The octopus 7-investigation on the death of Commissioner Cattani”.

In 2002 he worked in the film “Avenging Angelo” with Silvester Stallone. In 2008 he is the protagonist of the blockbuster film “Sorry but I call you love ”by Federico Moccia where it reads with Michela Quattrociocche and the sequel “Sorry but I want to marry you”. In Our life, a 2010 film, is the protagonist together with Elio Germano. In 2011 he also acted together with Paolo Conticini in the successful miniseries “Come un delfino”. Also in 2011 he participated in the film “No one can judge me” with Paola Coltellesi with which he will also work in “Sorry if I exist” of 2014. Also in 2014 he starred in the cinema with the film “Fratelli Unici” with Luca Argentero, Carolina Crescentini, Giusy Buscemi and Miriam Leone. Raoul is also a director, voice actor (his is the voice of Uncle Fester in the animated film “The Adams Family) and tv series producer. In some productions he collaborated with Marco Bocci, another sex symbol of Italian cinema. In 2010 he was appointed Goodwill Ambassador of the United Nations Food and Agriculture Organization.

In June 2021 he interprets The Last Race, a docufilm with Manuel Bortuzzo, Massimiliano Rosolino, Filippo Magnini and Emiliano Brembilla.

From September 2021 Raoul Bova becomes the protagonist of Don Matteo, taking the baton from Terence hill interpreting the role of Don Massimo.

Made in Italy TV series

Raoul Bova plays the great designer Giorgio Armani in the new fiction license plate Mediaset “Made in Italy” that tells the 70s fashion together with actors of the caliber of Margherita Buy, Stefania Rocca, Claudia Pandolfi and Nicoletta Romanoff, Greta Ferro And Marco Bocci. In the cast we also find Fiammetta Cicogna, Maruzio Lastrico, Eva Riccobono, Valentina Carnelutti, Sergio Albelli, Giuseppe Cederna, Maurizio Lastrico and Saul Nanni. The series sees the participation of big names of the time like Armani, Fiorucci, Krizia, Missoni and Valentino who have opened their archives for the occasion and in the series the protagonists will wear original clothes and accessories.

After several sentimental stories, in 2000 Raoul Bova he married Chiara Giordano, daughter of the famous marriage lawyer Annamaria Bernardini Pace, with whom he lived for thirteen years. With Chiara he had two children: Alessandro Leon and Francesco. The marriage ended after Raoul’s acquaintance with Rocio Munoz Morales. Chiara is currently engaged to dancer Andrea Evangelista, 15 years younger, a Domenica In dancer, engaged in the study of I Fatti Vostri with the presenter Samanta Togni.

In 2013 Raoul Bova leaves his wife Chiara for the young Spanish actress Rocio Munoz Morales that he had known on the set of the film “Immaturi-il viaggio”. Two girls were born from their relationship: Luna, on 2 September 2015 and Alma on 1 November 2018.

From gossip rumors it seems that in the summer of 2020 Raoul and Rocio spent a few days in Puglia looking for a location for the wedding: the two are in fact very close and it seems that Raoul has decided to take the big step!