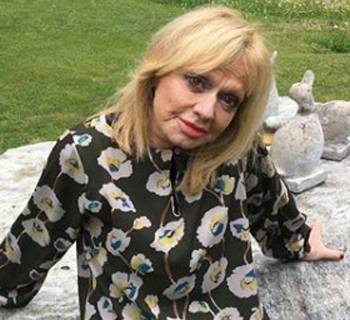 Rita Pavone it’s a singer, actress And showgirl nicknamed Pel di Carota because of her red hair. She has recorded 27 albums in 7 different languages ​​and is one of the few to have entered an English chart. He is one of the judges of All Together Now 2021.

Who is Rita Pavone

Rita Pavone was born in Turin from his father Giovanni Pavone and mother Maria, he a Fiat worker of Sicilian origins and she is a housewife of Ferrara origins. She is the third of the couple’s four children, in fact she has three other brothers: Piero, Carlo and Cicco. Encouraged by her father, she made her debut at the Alfieri Theater in “Telefoniade” a show for children produced by the then existing telephone company Stipel. Between ’59 and ’61 he performed at private parties and in Turin clubs, earning the nickname “Paul Anka in a skirt”, precisely because he prefers the songs of the Canadian singer. To help the family he works in a shirt shop and the working hours do not allow her to continue her studies at the Commercial Technical Institute to which she is enrolled. In ’62 she won the Festival degli Sconosciuti in Ariccia and this victory brought her a meeting with the RCA record company which immediately offered her a contract. Since 1968 she has been married to the record producer Ferruccio Merk Ricordi, aka Teddy Reno, from whom two children were born, Giorgio and Alessandro Merk. This relationship was heavily criticized and hindered by her family. She currently lives in Switzerland with her husband and two children.

Already Rita’s first records reach unexpected success: sales exceed one million copies sold. His singles reach the heights of the hit parades. In 1967 he won the Cantagiro, an itinerant singing event with the song “This love of ours” which also becomes the theme of the film “Don’t tease the Mosquito”. He also collaborates with international labels such as Decca (UK), Teldec and Polydor (Germany), Barclay, RCA and Phonogram (France), RCA Victor (USA, Japan and South America). For the latter he publishes “The International Teen-Age Sensation” and the single from which it is based remains for 10 weeks on the Billboard charts. The BBC dedicates a special to her entitled “Distinguishing marks: freckles”, she performs for a whole month in the Olympia theater in Paris and sells 800,000 copies in Germany alone.

In 1968 Rita Pavone left RCA and founded Ritaland together with Dischi Ricordi and through which she recorded some songs for children. The following year he participated in the Sanremo Festival with the song Zucchero, but ranks in 13th place. It turns out to be a very difficult time due to her marriage to Teddy. He leaves Ricordi and returns to the RCA which forces her to participate in the Sanremo Festival with the song “Ahi ahi boy”, which despite the lack of enthusiasm of the Pavone, becomes a success in Spain.

After a period of pause, he returns to the public scene by participating in Canzonissima with two covers by Barbra Streisand. In 1979 he released the album “RP ’80”. He tries a new path with the songwriting and interprets pieces from the repertoire of a very young Claudio Baglioni. This direction continues and intensifies with the help of the American author Laura Trentacarli, aka Carolain. This is how the album “Dimensione donna” (1985) comes out and two years later “Rita Special”, another collaboration with Carolain, but also by Giuni Russo, Maria Antonietta Sisini and Cristiano Malgioglio. After the rejection in Sanremo, she publishes the latest album of unreleased songs “Gemma and the others” in which in addition to writing the lyrics, she is also an arranger. In 2006 he announced his retirement from the public scene, but in March of the same year he ran for the election for the Senate, without however being elected. Seven years later he released a double album called “Masters”, preceded by a cover of the Elvis Presley song, “I want you with me”. On 11 February 2017, at the 67th Sanremo Festival she was awarded the Lifetime Achievement Award assigned by the city of Sanremo. In 2020, 48 years after the last time, he announces his participation in the Sanremo Festival where he presents a song written by his son Giorgio. Also in 2020 he released a double album “RaRità”.

Rita Pavone a At the age of 19, in 1964, he interprets Giannino Stoppani in the television drama “Gian Burrasca’s Journal” based on the novel by Vamba, directed by Lina Wertmüller and with music by Nino Rota. He is also the protagonist of several musical films “Rita, the American daughter” (1965) with Totò, “Rita the mosquito” (1966) and “Don’t tease the mosquito” from 1967. In the same year, “Little Rita nel West” (with the same name 33 rpm) and “Feldmarescialla”, both with Terence Hill, pseudonym of Mario Girotti. In 1971 she returned to TV with a special “Ciao Rita” where she can also show other talents, such as that of presenter, dancer and imitator. Program is a success of ratings. In 1975 he concentrated on theater: in fact he acted in “Due sul pianerottolo” (which later became a film) and “Risate in ascolto”. She becomes host again for Rete 1, in the show “Rita: e io”, of which she also releases an LP. The passion for the theater returns again and recites in “Quel diavolo di Santarellina” with Piero Mazzarella. From 1978 to 1980 she was the host of “What a combination” an entertainment program broadcast on Sunday evening by Rete 2. Conceived to entice Italians to pay the premium, the program consists in the extraction of a number that corresponds to a booklet of subscription and that wins a prize. After the experience of “What a combination” that is difficult for Pavone due to the collaboration with Gianni Cavina, she launches into the world of comedy, presenting, together with her husband Teddy Reno, the duo Zuzzurro and Gaspare, composed by Nino Formicola (Gaspare) and Andrea Brambilla (Zuzzurro). In 1995 he published an autobiographical book with Sperling & Kupfer entitled “Nel mio piccolo” and the same year, he returned to acting interpreting Maria in William Shakespeare’s “Twelfth Night” at the Roman Theater of Verona. Pavone declares that this is “a sensational experience, of reflection and a real artistic turning point”. He also plays Gelsomina in the reinterpretation of Federico Fellini’s “La strada”. Between 2000 and 2001 he is among the protagonists of the musical variety “I Ragazzi Irresistibili” with Adriano Pappalardo, Little Tony and Maurizio Vandelli. In 2016, at the age of 71, Rita Pavone is among the contestants of the talent show “Dancing with the stars” and together with Simone Di Pasquale, her television partner, they are placed in third place. Since November 2020 he has been a judge, alongside Anna Tatangelo and Francesco Renga, in the program “All together now – The music has changed”, hosted by Michelle Hunziker.

Rita Pavone meets Teddy Reno in 1962 during the Festival degli Sconosciuti in Ariccia where he is the patron saint of the event and becomes a pygmalion for Rita and 6 years later, in 1968, her husband. This relationship with a married man and a son brings not only controversy, but also problems for his image: for the public Rita is a nice teenager, soap and water, not a family breaker. “They didn’t forgive my marriage to Ferruccio, but that was something I wasn’t willing to have regrets about, it was too precious to me. We were hindered as a couple, muddied, but today we are still here ”. Fortunately, Rita manages to revive herself thanks to her music. The couple currently lives in Switzerland and Pavone said living in Switzerland allowed her to understand what integration means.

Rita Pavone has an Instagram profile where he posts photos of little cognolina Joy, promotional images of the new program in which “All together now” is the judge, photos with his famous friends such as Enrico Ruggeri, Pelé and Diego Maradona and of course, those of his great love Teddy. 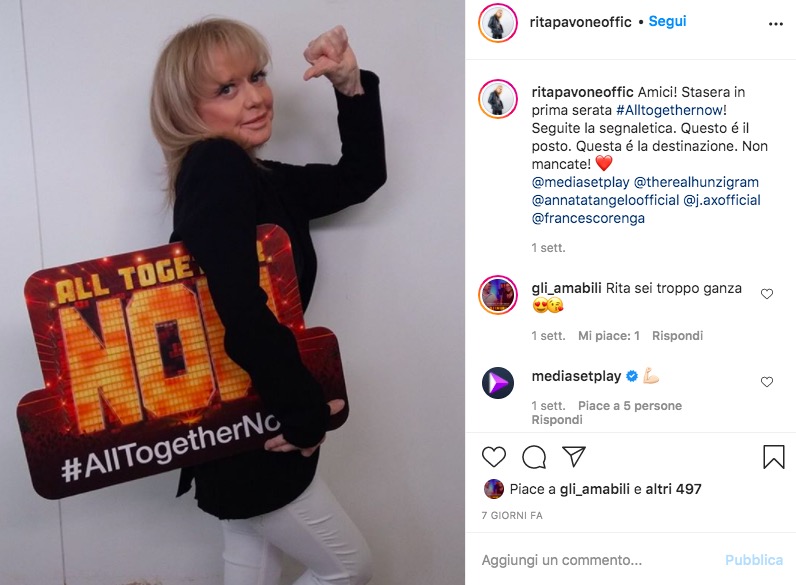 Tag #all together now

Home » Music ” Who is Rita Pavone: Biography, Age, Career, Cinema and All Together Now