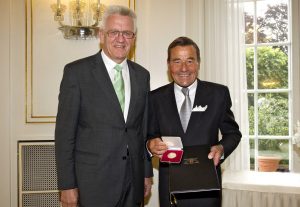 How rich is Wolfgang Grupp?

Wolfgang Grupp is an entrepreneur who is not afraid of offending himself from time to time. The manufacturer of leisure and sportswear, which employs a good 1,200 people in this country and can thus prove itself against the cheap competition from the Far East, is definitely considered eccentric. The success seems to have proven Wolfgang Grupp right. After all, the merchant’s textile company has already generated an annual turnover of over 100 million euros in the past. The wealth millionaire did not lead the Trigema Group, which was founded in 1919, from the start. Rather, he only got into this industry in 1969 and had big plans straight away. Wolfgang Grupp has an esteemed Assets of at least 100 million euros, but it can be assumed that this is even higher.

At that time, Wolfgang Grupp had decided to discharge the group and lead Trigema to significant successes. The company’s history to date and the increasing sales figures prove the entrepreneur from Swabia to be right. And Wolfgang Grupp can also be very proud of this success: Since he took over the textile company, Trigema has not had any more operational dismissals. Even short-time work is sometimes not an issue at the company and the equity ratio is sensational at 100%, with Mr. Grupp being the sole owner.

In addition, Trigema has also appeared as an important training company under the management of Wolfgang Grupp. After all, there are between 40 and 50 young people per year who are allowed to learn a trade in the group. In addition, the entrepreneur pays his employees an hourly wage that is above the minimum wage. In order to Grupp definitely lives up to its role model function.

So this is an entrepreneur who lets actions follow words and who stands up for Germany as a business location. He has already represented this position in countless TV talks and at the same time criticized many leading managers in this country for their irresponsibility. Rather, it demands that leaders from the world of business should take on more responsibility and be responsible for their actions. To the Commitment to his home country the entrepreneur Wolfgang Grupp has already received the Cicero speaker award.

Mr. Grupp is considered to be a very frugal person, who nevertheless occasionally affords a little bit of luxury. The entrepreneur likes to travel in his own helicopter between business transactions. The family owns a thatched villa with a 25,000 square meter garden and 45 meter pool in Burladingen with its own butler. The groups also own a hunting lodge in the Allgäu, because Wolfgang Grupp is a passionate hunter. With a estimated assets of around 100 million euros should that be easy in the budget.

In 2019, for the 100th company anniversary of Trigema superstar Helene Fischer, a private concert with a gala dinner for all employees was booked. According to the boss, the cost of the appearance should have moved between 500,000 and 700,000 euros.

Mr Grupp as a family father

His marriage to his wife Elisabeth, which was concluded in 1988, resulted in two children. Bonita Grupp was born in 1989. Her brother, Wolfgang Grupp junior, was born in 1991. That the family in one Villa directly opposite the Trigema company headquarters in Burladingen lives, may have awakened the economic ambitions of the squad offspring at an early age. For the 70th birthday of their father in 2012, both children made a promise to the entrepreneur. You will accept his economic legacy and continue to run the Trigema Group in accordance with his wishes.

Wolfgang Grupp sees this promise made by his children as a personal achievement. In an interview published by the news magazine Focus on August 1, 2011, the entrepreneur finally emphasized: “If my children didn’t want to inherit, we would have certainly failed, because the parents are the first role models for the children.” to hope that the young Grupp offspring will be able to follow in their father’s footsteps. Because the medium-sized entrepreneur has his Talent as a leader and a man with a viable vision for the future clearly demonstrated by Trigema’s impressive debt relief.

However, both children already work in the family business. Daughter Bonita deals with e-commerce and son Wolfgang works in sales. Of course, there are no special positions for the children. However, only one of the two children should inherit and take over 100% of the company.