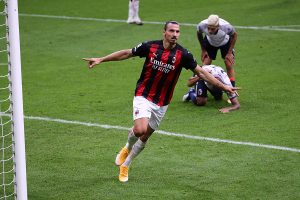 How much does Zlatan Ibrahimovic earn?

Zlatan Ibrahimovic, one of the best strikers in the world, comes from Sweden despite his Slavic name. The son of a Bosnian father and a Croatian mother, he was born in Malmö in 1981 and began playing football there. He soon gave up attending the local high school in favor of his football career. Most recently, Zlatan played at LA Galaxy, where he was even a top earner in the MLS with a salary of $ 7.2 million. The superstar already played for his old club AC Milan in the second half of the 2019/2020 season. For half the year he got a salary of around 3.5 million euros and for the following season 7 million euros. The contract was extended for a further year in 2021 on the same terms and runs until summer 2022.

The Swede benefits from a lucrative advertising deal with Nike, which will bring him up to 3 million euros extra per year. He earns further income through appearances in various TV commercials (Volvo, Samsung, …) and with his autobiographical book, published in 2012. He registered his first name Zlatan as a brand for sporting goods, shoes and clothing. Ibrahimovic’s net worth is estimated at 180 million euros.

Zlatan Ibrahimovic: From Nobody to Millions of Fortune

In 1999 Ibrahimovic made the leap to professional footballer. With Malmö FF he was initially relegated, but helped to make the direct promotion possible with 12 goals in the next season. The interest of the international clubs was aroused. So he changed in the summer 2001 for 7.8 million euros transfer to Ajax Amsterdam. Paid three years later Juventus Turin 19 million transfer fee for Ibrahimovic. In 2006 he finally moved to Inter Milan – the club had the transfer cost EUR 24.8 million in a transfer fee. Ibrahimovic left in one of the most expensive transfers in football history (to date) for about 75 million euros in 2009 to FC Barcelona. After friction with coach Pep Guardiola, he moved back to Serie A at AC Milan in 2010 and earned 9 million euros net per season.

In 2012 Ibrahimovic joined his next station Paris Saint-Germain where he even played alongside superstar David Beckham in the second half of 2013. With Annual salary of 15 million euros at Paris Saint Germain Ibrahimovic was one of the highest paid footballers in the world.

Manchester United and an insane salary

After four French championship titles, Zlatan moved to the English Premier League club Manchester United in the summer of 2016 and at short notice also went on the hunt for goals alongside Bastian Schweinsteiger. Since the striker was available for a free transfer, the salary had to be bombastic:

Der Spiegel published the contract details that were leaked via Footballleaks. Mino Raiola, Ibra’s longtime and trusted advisor, negotiated a top deal with coach Jose Mourinho for the Swede, where the player’s agent should also earn a lot. in the One-year contract until June 30, 2017, Zlatan Ibrahimovic is said to have received a gross salary of 22.62 million euros. But there are also interesting bonuses for goals or assists, which are made up as follows:

Ibra was able to achieve a total of 28 goals and 10 assists until his cruciate ligament rupture on April 20. So an additional 3.39 million euros went to the superstar’s account. There was no automatic contract extension with the same top conditions until 2018 due to the injury and the table placement. United should have finished the Premier League in the top three and Zlatan should have started 31 of 38 games. (Up to his injury there were 27 of 33 games).

The contract extension between Manchester United and Ibrahimovic was decided in August 2017. By waiving half of his base salary, he was able to stay with the English record champions at least until the summer of 2018 and continue to hunt for goals. In March 2018, however, the 10 million contract was terminated prematurely and ended with the change to LA Galaxy.

He moved to the MLS in March 2018 LA Galaxywhere Zlatan gave up a lot of money in the first year. The first salary was just $ 1.5 million. The reason for this is the so-called salary cap, as it also exists on other US sports loungers (NFL, NHL, NBA, …). In the MLS, however, there are three exceptions per team, which were already taken at Galaxy. In 2019, the Swede was the top earner in the MLS with 7.2 million US dollars before saying goodbye.

I came, I saw, I conquered. Thank you @lagalaxy for making me feel alive again. To the Galaxy fans – you wanted Zlatan, I gave you Zlatan. You are welcome. The story continues … Now go back to watch baseball pic.twitter.com/kkL6B6dJBr

As a side detail: The Swede also had a 100 million dollar contract from China, which he gratefully declined in favor of LA Galaxy. His player agent Mino Raiola is said to have not been happy with the deal.

Back to AC Milan

In December 2019, the Swedish superstar signed for a second term with AC Milan. He already played in the Milan jersey from 2010-2012. The new contract initially runs until summer 2020 and includes an option for a further year. For half a year Zlatan will receive a salary of 3.5 million euros and in 2021 7 million euros.

In April 2021 there was a scandalous discovery: through a 10% stake in the Swedish betting company “Bethard“Via a sub-company, Zlatan clearly violated FIFA regulations, which now have implications and could even lead to early retirement. Footballers are prohibited from participating in betting companies.

In parallel to his career in international clubs, Ibrahimovic also played as Swedish international. First he scored for the U21 national team, from 2001 for the senior national team. At the 2002 World Cup he was still one of the substitute players, but at the 2004 European Championship he already had a regular place in the squad. At EURO 2012 and 2016 he led his team as captain. The EURO 2016 should also be his last stop in the national team.

The greatest achievements of Zlatan

Own postage stamp in Sweden

Due to his incredible fame in Sweden, the superstar was given his own stamp collection in 2014. On total Ibrahimovic can be seen on five Swedish postage stamps. He himself said in the usual arrogant way: “I usually get bills myself, and they rarely have nice postage stamps. Maybe it will be different now “

The Swedish striker has had his own video game called “Zlatan Legends” in the app stores since August 2017. Here, too, the star will earn a lot and continue to strengthen its brand.

In honor of the top star, a 500kg bronze statue was erected in Malmö on October 8, 2019. Due to the purchase of shares of the Hammarby IF football club, which is in direct competition with Malmö FF, the statue has already been damaged several times by angry Malmö fans.

Ibrahimovic, who originally came from a rather poor background, and his wife, the former Swedish model Helena Sager, do not hide their wealth. You own several splendid estates and drive luxury cars. Impressive real estate has the family in Malmö, Paris, Stockholm, Milan, New York and the ski resort Are in Sweden.
Ibrahimovic has an island in Lake Mälaren for just under 3 million euros, the third largest lake in Sweden. The island includes 500 hectares of hunting grounds.