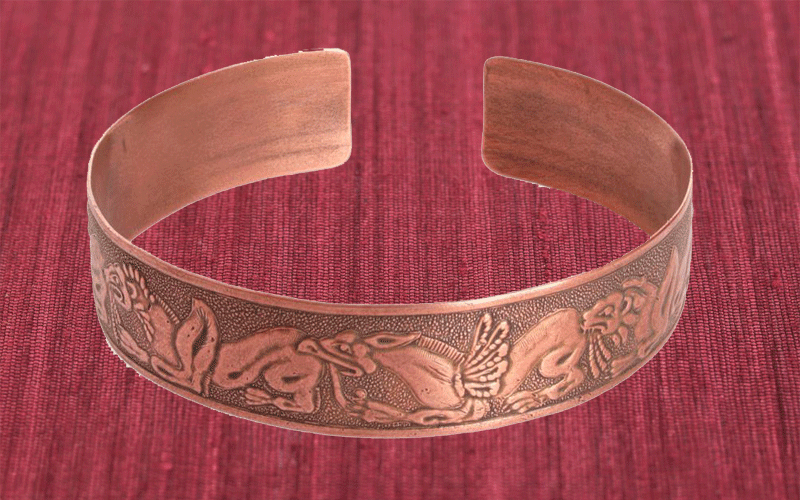 Copper was one of the first metals that humans learned to mine and use in life. Since copper is very malleable, it was used thousands of years ago to make tools and jewelry. Moreover, at that time, their main tools were made of bones and flint. A copper pendant found in what is now northern Iraq dates back to 8,700 BC and is a decoration of the Neolithic period. But although people have adorned themselves with copper since prehistoric times, the use of copper bracelets to treat arthritis pain did not take off until the 1970s. Are they really helping, or is this just a marketing ploy?

Proponents of the benefits of copper bracelets often cite research by Werner Hangarter (1904–1982), a German physician who investigated bone diseases. Hangarter began promoting the therapeutic potential of copper to the masses after he heard that miners in Finland hardly develop rheumatism if they work in copper mines. In the 1950s, he began treating patients suffering from various rheumatic diseases, including rheumatoid arthritis, with injections of copper and salicylic acid solution.

The results were impressive, with patients showing “rapid temperature reduction, pain relief and increased mobility .”
Hangarter published several articles about his work, and the alternative medicine movement subsequently popularized his ideas. By the mid-1970s, copper jewelry was being touted as a natural, non-invasive remedy for pain and inflammation in arthritis. Various topical creams containing copper, foot pain insoles, and copper fiber compression sleeves are currently on sale. But are there any benefits?

Copper does play an important role in human health. Like many other minerals, copper is an essential micronutrient – a key contributor to the formation of red blood cells. The most common sign of copper deficiency is anemia. Copper is found in many common foods, but shellfish, nuts, and chocolate are the richest sources of this mineral.
Copper contributes to the formation of connective tissue, so it is possible that copper deficiency can actually worsen the symptoms of arthritis. However, this does not necessarily imply that increased copper levels can improve the patient’s well-being.

In retrospect, several problems can be seen in the research of the scientist Hungarter. Based on his own inferences, he hypothesized a chain of causality – that the presence of copper in the environment helped the miners prevent the development of rheumatoid arthritis. In fact, the explanation may be completely different: just none of the active miners had this disease, because the people who developed it left the profession much earlier. At least try to bend over with back or joint pain; what to say about the extraction of rocks?

His use of copper salicylate solution also raises more questions than answers. Salicylic acid is the active ingredient in plain aspirin, and the effects Hangarter describes – pain relief and fever reduction – can easily be attributed to aspirin alone.
But if taking copper by mouth doesn’t work, can wearing copper jewelry help? The effectiveness of wearing copper is based on the idea that certain amounts of metal can be absorbed through the skin. But so far, science knows very little evidence to support this statement, and in any case, a regular peanut butter sandwich or chocolate bar will turn out to be a more effective way to introduce copper into your body than a 5,000 ruble bracelet.
For the same reason, it is unlikely that copper-added insoles or compression sleeves will outperform any other material. Copper creams are based on salicylic acid – that is, again, they contain aspirin, which is easily absorbed through the skin. In all of these cases, the cream will relieve the symptoms, but the addition of copper does not make it more (or less) effective.

A 2013 study of 70 patients with rheumatoid arthritis provides the most complete refutation. In a double-blind study, patients who wore copper bracelets for five weeks experienced no significant reduction in pain or inflammation compared to those who wore copper-like bracelets — this is how the placebo effect worked. So even if copper is really important for human health, you should not go to extremes and use it for other purposes. Better yet, consult a doctor about this; arthritis is a rather serious disease.