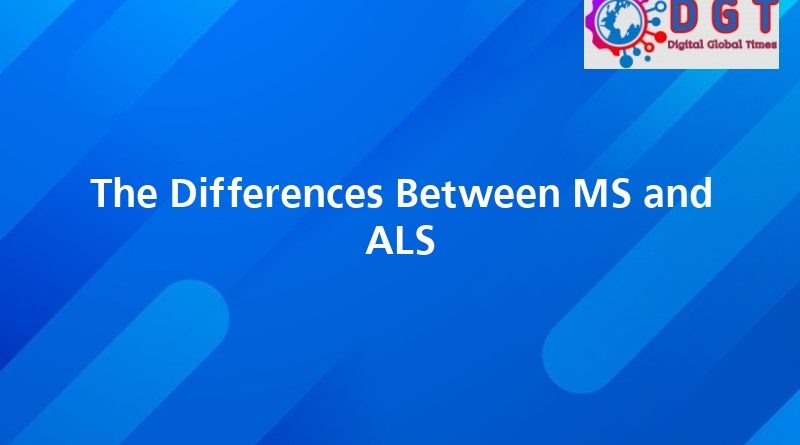 Even though Multiple Sclerosis, or MS, and Amyotrophic Lateral Sclerosis, or ALS, have similar features and symptoms, they are quite different diseases. It’s important to understand the differences due to how each gets treated when human beings contract either of these diseases.

What Are Some of the Similarities Between the Two Diseases

People often get confused by these two diseases because they do have quite a few similarities. For example, both of these diseases affect your muscles and the ability of your body to move freely.

Each of these diseases attacks the spinal cord and brain of the person affected. They both have the word sclerosis in their name as well.

Another quite common symptom is the scarring caused by each. Both diseases can cause hardening or scarring around nerve cells in the body.

Some of the Important Differences Between the Two Diseases

Some of the primary ALS and MS differences are in how they affect the various systems in your body. MS is an autoimmune disease. In practical terms, this means that the disease causes your body to attack itself.

On the other hand, ALS is a disorder of the nervous system. ALS is a disease that will wear away nerve cells in your brain and spinal cord.

How Each Disease Can Impact Your Nervous Cells

Since both diseases contain the word sclerosis, it is probably reasonable to understand why that is the case. Sclerosis originates from the Greek word for “scar.”

Each disease contains the word sclerosis because each causes scarring of the covering on nerve fibers. It is the process of how this happens that is different between the diseases.

The nerve cells in your body have a thin covering called myelin sheaths. They protect your nerve cells much in the same way that insulation serves to protect electrical wires.

For those with MS, your body attacks these sheaths in your spinal cord and brain. When there is damage to these sheaths, signals that should go from your brain to your body can potentially get interrupted.

In contrast, ALS damages and breaks down the actual nerve cells in both your spinal cord and your brain. These nerve cells, also called motor neurons, regulate and control the voluntary muscles in your face, legs, arms, and diaphragm for breathing.

With ALS, you not only lose control of your motor functions, but your motor neurons also begin to break down, and the sheaths begin to harden.

Some of the Symptoms To Look Out for With These Diseases

In the beginning stages of each disease, some of the symptoms patients will experience can be similar with both diseases. These symptoms can include weak or stiff muscles, spasms or twitching, fatigue, and trouble walking.

When any of the symptoms begin to occur, there is no point in trying to make a guess as to what might be causing the symptoms. It is imperative to see a doctor immediately to get a proper diagnosis.

As ALS begins to attack nerves, symptoms will get worse and more degenerative. As the disease continues to progress, the patient can expect symptoms such as trouble breathing, trouble swallowing, slurred speech, and a possible inability to move.

People diagnosed with ALS should expect to live five years or less after the diagnosis, but some do live longer. There is constant research underway to find suitable treatments to both improve and extend the quality of life.

In contrast, the course of MS can be harder to predict fully. Symptoms may appear and then disappear, and they can disappear for months, if not years at a time.

Some of the unique symptoms of MS include affecting your senses, such as your ability to smell or taste, control your bladder, emotional and mental health, and sensitivity to fluctuating temperatures. Because of the complications caused by MS, life expectancy in patients with MS is roughly seven years less than someone not diagnosed with MS.

While there is no cure for either disease, each offers treatments to help slow the progression of the disease. Changes in your lifestyle can also help in managing symptoms and improving your quality of life. That is why it is so vital to get diagnosed early and begin treatment immediately.