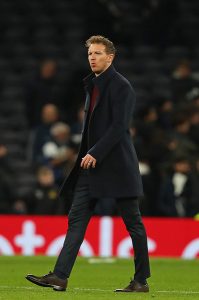 How much money does Julian Nagelsmann have?

Julian Nagelsmann is considered to be one of the most talented young football coaches in the world. After he had to give up his playing career at the age of 20, he immediately got into the coaching business. At the age of 28, he became head coach at TSG Hoffenheim, making him the youngest person to ever hold this position in the Bundesliga. The cherished Julian Nagelsmann’s assets are 7.5 million euros.

After Julian Nagelsmann became head coach of TSG Hoffenheim at the beginning of 2016, he collected 2 million euros per year. When he moved to RB Leipzig in the summer of 2019, this amount increased to 2.5 to 3 million euros. Bonus payments were also made if the team achieved certain football successes. In 2020, the coach received an extra 500,000 euros for entry into the semi-finals of the Champions League. As a coach at FC Bayern Munich, he earns an annual salary of 8 million euros.

In addition to his coaching salary, Nagelsmann also makes money as an advertising figure. In 2018 he became Jaguar’s brand ambassador, and in 2020 he became the first soccer coach to sign a sponsorship deal with Nike.

Football coach at the age of 20

Julian Nagelsmann started playing football at FC Issing when he was five. After a few years with the village club, he went to FC Augsburg, where he stayed until 2002. Then he moved to TSV 1860 Munich. For the club he played in the U17 and U19 teams, but had to contend with injuries early on. In the summer of 2006 he was then appointed to the squad of the second team from 1860, but did not make any games for them due to injury. In the summer of 2007 he went back to FC Augsburg, but could not play for the second team there either. After he was operated on the meniscus for the second time in 2007 and the attending physician had warned him of osteoarthritis and a stiff knee, Nagelsmann ended his career as a footballer when he was only 20 years old.

Since Nagelsmann’s contract in Augsburg was still running, head coach Thomas Tuchel made him his assistant in 2007. Until the end of the 2007/2008 season, he watched the games of Augsburg’s upcoming opponents and thus got good insights into the work as a coach. In summer 2008 he returned to 1860 Munich, where he was assistant coach of the U17 team for two years. In the summer of 2011 he took over as head coach of the TSG Hoffenheim U17 team. When Markus Babbel, the coach of the Hoffenheim professional team, was fired in December 2012, Nagelsmann was their assistant coach until the summer of 2013. He then became a U19 coach and won the German A Junior Championship with his team in June 2014. In the following year Nagelsmann and the Hoffenheim U19s moved into the final again, but were defeated by the youth of FC Schalke 04.

With Hoffenheim to Europe

In October 2015, those responsible at TSG Hoffenheim decided to make Julian Nagelsmann the head coach of the professionals in summer 2016. However, because the then coach Huub Stevens resigned from his position in February 2016 due to cardiac arrhythmias, Nagelsmann took over early on. At the age of just 28, he became the youngest head coach in Bundesliga history. He saved the relegation-threatened Hoffenheim team from going to the second division and led them to fourth place in the Bundesliga in the summer of 2017. This was the first time in its history that the club qualified for a European competition. In the 2017/2018 season, Nagelsmann and Hoffenheim even improved their previous year’s position and ended up in third place.

In the summer of 2018, Julian Nagelsmann decided to leave Hoffenheim with an exit clause in his contract. Therefore, he moved to RB Leipzig a year later, where he signed a contract until 2023. With the Saxons he reached third place in the Bundesliga and the semi-finals of the Champions League in summer 2020. In April 2021, it was announced that Nagelsmann was moving to FC Bayern Munich for the 2021/2022 season, following in the footsteps of Hansi Flick as coach. Karl-Heinz Rummenigge had stayed out of the contract negotiations and had Oliver Kahn, as the designated CEO of Bavaria, negotiate the details with Nagelsmann. The record champions paid a transfer fee of 15 million euros for the coach, which can grow to 25 million euros with bonus payments. Never before has more money been paid for a football coach anywhere in the world.