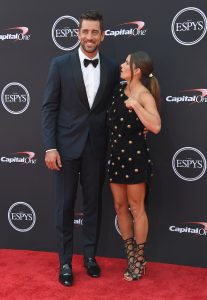 How much money does Aaron Rodgers make?

Aaron Rodgers is one of the top earners in the NFL as a quarterback for the Green Bay Packers. With an estimated fortune of around 120 million euros, he is also one of the richest NFL players. Incidentally, since 2018 he also owns a 1% stake in the NBA Team Milwaukee Bucks.

In 2005, he was selected 24th in the first round of the Green Bay NFL draft. The first few years, however, he had to line up behind the fixed starting quarterback Brett Favre and only occasionally made short appearances. When Favre announced his resignation in 2008, the Hour of the great Aaron Rodgers beaten, who was allowed to take the official successor. However, the first season was rather unsuccessful and very mixed. It wasn’t until 2009 that the breakthrough came and the Packers secured their place in the playoffs, although they also had to admit defeat in the wildcard round against the Cardinals.

2010 was the year of Aaron Rodgers. He led the Packers again via the wildcard into the playoffs and then up to the SuperBowl XLV. Here they defeated the Pittsburgh Steelers, led by quarterback Ben Roethlisberger. A-Rod entered the NFL history books and was also named the 2010 SuperBowl MVP.

The following years 2011-2016 Rodgers always moved into the playoffs with the Packers, although the second Super Bowl ring was not yet within reach. Green Bay only missed the playoffs in 2017, and probably also because of the quarterback’s broken collarbone. It remains to be seen whether the superstar will remain in good health in the future and will continue to ensure success at Lambeau Field and maybe even reach for the coveted ring again.

Aaron Rodgers has been a top performer at Green Bay Packers for over a decade and is therefore also the top earner. In 2018 he signed his new 4-year contract with the Packers and, as expected, it is worth millions.

Salary in the next few years according to the current contract