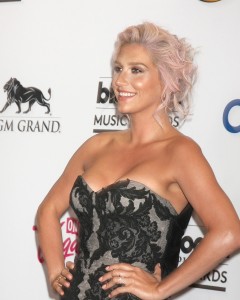 There is currently mainly negative headlines to read about Kesha. Because the LA-born singer has been arguing with her record label Sony for a long time. The Kesha herself states that she and her producer Dr. Luke, who is said to have sexually and physically abused her and also caused her emotional damage, simply can no longer work together. The star just wants to leave Sony, but the label apparently doesn’t want to let the artist go. Kesha had already sued her producer in 2014, while the lawsuit against the label did not follow until 2015.

Now a judge of the Supreme Court of New York, where the legal dispute has to be carried out due to a corresponding contractual clause, has ruled that Kesha will not simply be released from her contract with the label. The singer should continue to work for the label, which employs the man who is said to have inflicted such terrible physical and mental torments on her. The music world has also taken notice of this apparent injustice and some of the greatest female pop greats have spoken out. Among them were not only Kelly Clarkson, Lily Allen, Lorde, Lady Gaga and Grimes, but also Taylor Swift, who was able to get a lot of money at the Grammys awards this year.

Taylor has now even opted for a rather unusual gesture to show that she stands behind Kesha. Because such a brutal legal battle naturally goes into the money, which is all the more threatening for the singer’s fortune, as she is currently not allowed to work with any other label and has practically no income. Kesha is tied to Sony and first has to dig deep into her pocket to fight her fate. Fortunately, however, there was a cash injection from Taylor Swift, which immediately provided US $ 250,000 for legal fees. So Taylor Swift proved that she is not only a phenomenal singer, but also has a big heart.