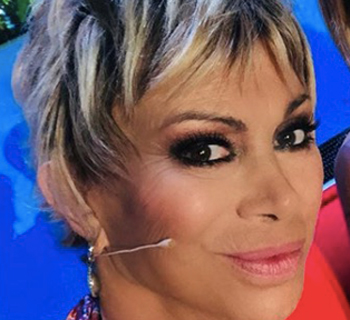 Carmen Russo is a dancer, actress and showgirl of great success, in fact over the years it has become a real pillar of Italian television, Carmen has in fact participated in several successful films, fiction and reality shows where she managed to demonstrate that she has become someone not only thanks to her beauty but also thanks to her character and his talent. Since 1987 she has been married to her husband Enzo Paolo Turchi and, since then, the two have been inseparable. From 13 September 2021 it is a competitor of the Big Brother VIP 6.

Who is Carmen Russo

Carmen Carolina Fernanda Russo, better known as Carmen Russo, was born in Genoa on October 3, 1959 under the zodiac sign of libra in a family that has nothing to do with the world of entertainment and television. The father in fact, Giovanni Russo, he is a policeman, his mother instead, Giuseppina Gherardini she is a cashier of a cinema. From a very young age Carmen loves to dance and immediately understands that that will be her future. In fact, the young dancer not only loves to move to the rhythm of music but loves being the center of attention. Her talent and character soon led her to pursue a career from professional dancer.

Carmen Russo and Enzo Paolo Turchi are the owners of the academy of dance classic and modern Energy Dance, in via Resuttana in Palermo. The school encountered covid-related difficulties and received the eviction in early November while Carmen is in the house of the VIP GF for arrears. For the judge, in fact, the pandemic and the consequent suspension of the activity does not justify the non-payment of the rent.

Carmen Russo has just under 300,000 followers on Instagram. He shares several shots of his personal life on Instagram, especially with his daughter Marzia. 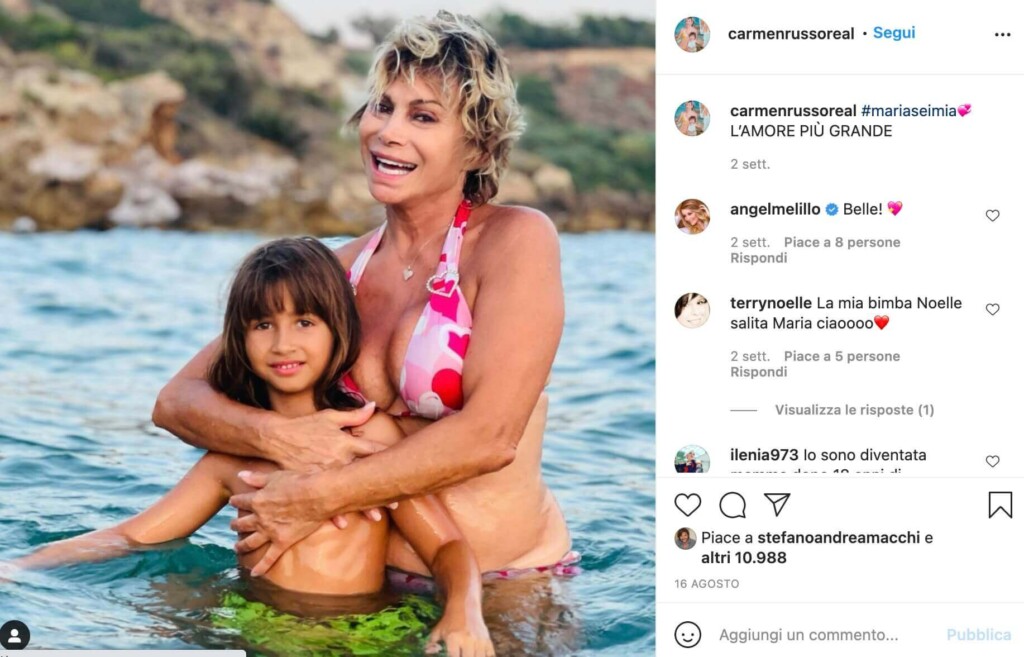 Carmen Russo is a very successful Italian showgirl, dancer and actress. From an early age she always knew that one day she would become an integral part of the world of entertainment and the jet-set, at just 14 years old she introduced herself to Miss Liguria beauty contest where it showed everyone its beauty by winning the first place. Strengthened by the success obtained in this beauty contest, the young woman thinks big and decides to subscribe to Miss Italia, unfortunately, however, here she is disqualified because of her age. His career began in the seventies, a period in which Carmen begins to build the character that we still know today. The first experiences as a dancer are made in some nightclubs where with her body and her beauty she manages to achieve a certain notoriety in a very short time. In the eighties Carmen posed without veils for some famous magazines such as “Playboy” And “Playman“Who have it made famous throughout Italy. Then Carmen lands in the world of television, first in some commercials famous is that of Morositas candies and of the Portobello program and then as an actress engaged both in fiction and on the big screen.

The turning point of his career in fact comes when he participates in the famous television program “Drive in“. Regarding her career in the world of cinema, Carmen has acted in many genres, horror, crime, comedy. In fact, over the years he has acted together with famous actors such as Lino Banfi, Alvaro Vitali and many more. Subsequently, in 2000, the showgirl also participated in the famous reality show “The island of the famous” with Walter Nudo, Giada De Blanck, Fabio Testi and other VIPs. His journey on the island is interrupted during the seventh episode, thus arriving one step away from the podium. In 2006 he participated in the same reality Spanish version where he had his revenge, here Carmen in fact won the edition. In 2008 he is a regular guest at the living room of Happy Sunday, also in this period leads the “Carmen Show”Where he obviously performed dancing. In 2012 he decided to participate again in theIsland of the famous now in its ninth editionAntonella Elia was also present together with the showgirl, Alessandro Cecchi Paone, Guendalina Tavassi and other VIPs. Unfortunately not even in this edition he manages to get on the podium. More recently, in 2017, he participated in the second edition of the Big Brother Vip conducted by Ilary Blasi together with Giulia De Lellis, Daniele Bossari, Cecilia Rodriguez, Carmen Di Pietro and many more. In September a new adventure will begin by participating in the new edition of Tale and Which Show, the Rai reality show hosted by Carlo Conti.

Carmen Russo has a long relationship with the dancer Enzo Paolo Turchi, the two are married in 1987 and in 2013, at the age of 54 Carmen gives birth to their only daughter Maria thanks to assisted fertilization. The two in 2015 they decided to renew their love getting married again, the idea was born from little Maria.

In the first weeks in the house of Big Brother Carmen presents herself as the balancing element of the house: always attentive to the needs of others and rarely in controversy. She receives a visit from her beloved husband only one week after entering the house Enzo Paolo Turchi.

Carmen Russo celebrates her 62-year-old birthday in the GF house on October 3: for her a majestic party and a DJ Set organized by her friend Jo Squillo. While Carmen is in the house of the GF her dance school of Enzo Paolo Turchi and Carmen is evicted for unpaid rents during the COVID period: who knows if Carmen will be informed of this event that concerns her closely.

Carmen Russo is one of the official competitors of Such and what Show 2020. The program starts on September 18, 2020 on Rai Uno is the cast, in addition to Carmen Russo, is composed of: Giulia Sol, Luca Ward, Sergio Muniz, Francesca Manzini, Francesco Paolantoni, Pago, Virginio Simonelli, Carolina Rey and Barbara Cola.

Home » Television ” Carmen Russo: Who is he, Age, Husband Enzo Paolo, Daughter and School of Dance