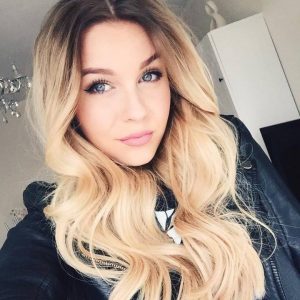 How much money does Dagi Bee have?

Dagi Bee (civil: Dagmar Nicole Ochmanczyk, today: Kazakov) was born on September 21, 1994 in Düsseldorf. She is now married to film editor Eugen Kazakov and runs several extremely successful companies. However, the focus is on her as a web video producer, YouTuber. The cherished Dagi Bee’s net worth is € 1.5 million.

Before Dagi Bee achieved nationwide fame through YouTube, she first began training as an industrial clerk. From 2011 Until 2015 she was in a relationship with the then well-known YouTuber LionT. Her own YouTube channel was created in June 2012 after being frequently seen on her then boyfriend’s videos. Her first video was released in October 2012. In her videos she mainly deals with cosmetics and fashion.

As early as May 2013, Dagi Bee was so well known that a fan event on Hamburg’s Rathausmarkt had to be canceled by the police shortly after it began, as the crowd could endanger the safety of the audience. This followed at the beginning of 2014 together with BibisBeautyPalace another fan meeting in Colognewhich, however, has not been registered with the municipality. Some fans were also slightly injured here. The result was a fine against Dagi Bee and BibisBeautyPalace.

However, this has not done any harm. In September 2014, Dagi Bee was already able to celebrate one million subscribers and was one of the largest German YouTube channels. In addition, she had won the Nickelodeon Kids’ Choice Award 2015 under the title “Favorite video blogger: Germany, Austria and Switzerland”. She won this award again in 2016.

Appearances in other plants

In 2015 she was Part of the film “Potato Salad – Don’t Ask!”, which was released in German cinemas in July 2015. This is still considered the worst film in the world today, as reported by WELT or Moviepilot, among others.

The first own brand was founded in 2016: Beetique by Dagi Bee. These are cosmetic products, which include mascara, lipsticks and make-up, among other things. The products were initially sold in the DM drugstore with their own display. An online shop followed later. There is also a Beetique Concept Store in the Thier Gallery in Dortmund.

However, at the end of 2019 there was a setback for the web video producer. DM ended their collaboration with Beetique after the demand was no longer strong enough. DM has marked the products with “Sale” in the branches.

the YouTube Channel Dagi Bee has around 4 million subscribers. With the YouTube partner program, everyone has the opportunity to participate in the advertising revenue. Dagi Bee has been doing this since the beginning of her career and thus the corresponding video content or video equipment can also be paid for. This creates a respectable income.

Cosmetics and fashion are considered extremely advertising-friendly on YouTube and thus the YouTuber’s channels have correspondingly higher CPM numbers. This means that Dagi earns significantly more than someone who would make videos on sensitive topics or who are highly polarized because of its content.

YouTube does not disclose how high the video producers’ earnings are, but the stars also keep themselves hidden. However, the income is not too scarce. SocialBlade estimates YouTube revenue. Dagi Bee has a monthly YouTube salary of up to 12,500 euros.

In addition, Dagi Bee conducts a pop-up store tour at various locations almost every year. In 2018, this concept was extremely well received by the fans, as around 50,000 visitors came to this event. Be here Sells their Beetique branded products and their merchandise. The profit margins are extremely high, especially with textiles, which means that these events will certainly be worthwhile in the future as well.