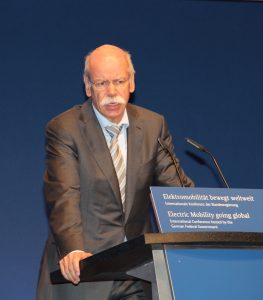 How rich is Dieter Zetsche?

Dieter Zetsche was born on May 5, 1953 in Istanbul (Turkey) and was Chairman of the Board of Management of Daimler AG from January 1, 2006 to May 22, 2019. Just one day later he became chairman of the supervisory board of TUI AG. He helped Mercedes achieve gigantic sales successes, which is why his current pension payments are above average. During his time as Daimler boss, Dieter Zetsche received salaries totaling 97.9 million euros from 2006 to 2019. But his earnings do not stand still in the pension either. He receives a pension of at least 1.05 million euros annually from Daimler. In addition, further claims can arise. The cherished Dieter Zetsche’s assets are 75 million euros.

From research to leadership

After his family lived briefly in Turkey because his father was involved in a dam project as a civil engineer, the family returned to Germany in 1955. Here Dieter Zetsche graduated from high school in 1971 and then studied electrical engineering. In 1976 he became a graduate engineer.

With his title he made the step into the research area of ​​Daimler-Benz AG. here he soon revolutionized the cornering behavior of motor vehiclesbecause he proposed a computerized method for doing this. Thus, these were also the first vehicles with the appropriate electronics in the vehicle.

After gaining his doctorate in engineering in 1982, he started working again for the Daimler Group. Above all Dieter Zetsche was heavily involved in car development and sales in Germany. In the meantime he also worked for commercial vehicles in Brazil.

But despite all this work The presentation of the new A-Class failed completely. It should be simulated how the vehicle reacts to evasive maneuvers. The vehicle overturned after skidding. However, this meant that new security technology was installed. With an electronic stability program, such misconduct should no longer happen in the future. In fact, the A-Class prevailed despite the competition and poor presentation. The fiasco seemed forgotten.

Chairman of the Board of Management of Daimler AG

Chrysler and Daimler-Benz AG merged in 1998 and Dieter Zetsche became a member of the board of the new Daimler Chrysler AG. In 2000 he was promoted to President and Managing Director of the Daimler Chrysler Group in the USA.

In the USA he had created a completely new program. Six factories were closed and numerous jobs were cut. In addition, the purchase prices were lowered under his pressure – thus Mercedes came into the black. From then on, Zetsche was considered a crisis manager. Then in 2006 he succeeded in the coup: He took over the management of the Daimler Group in a total of 17 countries. He held his own until he retired in 2019.

Dieter Zetsche is not one of the richest Germans with his fortune. To play in this league, you need a fortune of a billion or close to that number. However has he is definitely financially secure for himself, his family and their descendants. As he continues to collect salaries from Daimler and TUI, his fortune will not decrease and can continue to grow.