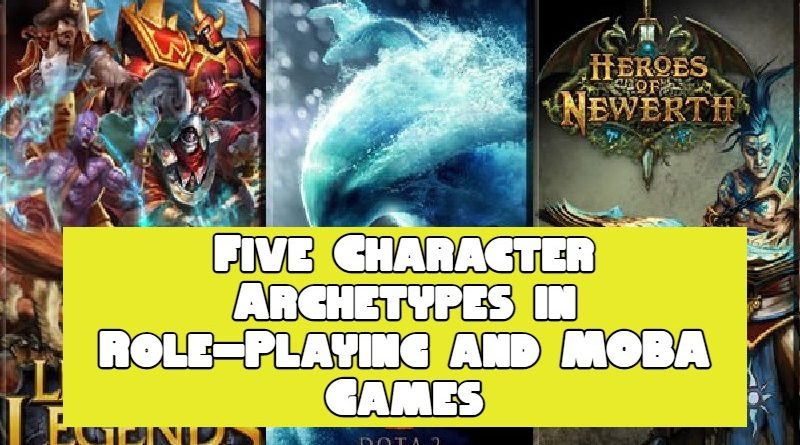 Playing role-playing games (RPG) or multiplayer online battle arena (MOBA) is an excellent choice if you want to escape reality for a while and immerse yourself in a different world. Depending on the game, they offer unique characters, fascinating lore, breathtaking landscapes, thrilling challenges, and overall, an immersive experience. Not to mention, you get to live an exciting life when you put yourself in the character’s shoes.

However, picking your favorite role in games can be tricky, especially if you are a beginner. You might be confused about your character or what items you must buy, build, equip, and bring with you. But do not worry! This article will provide you with a quick and easy guide to timeless roles in games. You might even have an idea on how to improve your personal Jean Genshin Impact build! So, here are five character archetypes in role-playing and MOBA games.

Do you like facing your enemies head-on? If you do, then the fighter archetype is perhaps the role for you. As its name implies, this role has a straightforward approach when fighting enemies. They excel in dealing with damage, fair mobility, and health pool. Some fighter archetypes may even use magic or special items, such as potions and throwables. They help the character inflict more damage and make the challenges easier to handle. Overall, this role is the best pick if you prefer a hack-and-slash or no-nonsense approach.

An example of this role is Geralt of Rivia from the game adaptations of The Witcher. Most, if not all, of his missions, have a straightforward approach, be it exterminating monsters or slaying bandits. He also uses potions, oils, bombs, and spells to assist and help inflict additional damage or debuffs. Geralt can also pick between light, medium, and heavy armor sets, making him a versatile fighter that can switch archetypes.

Kratos from God of War 2018 may also count, as the game has some bits of RPG elements. He can inflict damage through a flurry of combos and special attacks, whether using the Leviathan Axe or the Blades of Chaos.

If you prefer attacking from a distance, then the marksman is the advisable role you should pick. Also referred to as sniper, archer, or ranger, this archetype can deal more damage when compared to the fighter. However, the marksman tends to be squishier and have less health and mobility. Because of this downside, they prefer to keep a distance. It allows them to inflict damage without taking it. The gaming community refers to this mechanic as “kiting.”

Excellent marksman examples include Ashe, Caitlyn, Jinx, and Twitch from League of Legends. They can inflict massive and continuous damage with basic attacks only, but it does not mean that their respective skills are useless. Their skills can help them deal out more damage. And with the proper item builds and assistance from their support champion, these marksmen can change the tides of the game.

You can also use this archetype when you play as the Sole Survivor in Fallout 4, especially if you are a newbie during the early game. It is because most of the melee weapons in the early game can be pretty tricky to use, and they may not be your cup of tea. Therefore, the “safest” weapons to use are firearms. Not to mention, the game has a massive selection of guns, from the laser musket in the early game to the Gauss rifle in the mid or late game.

“Hit them fast and hard” or “silence is a virtue” are statements that you can associate with the rogue, also associated with the thief, scout, and assassin. Although they may not have the health pool of a fighter or the range of a marksman, the rogue can back them up with their mobility.  Speed and stealth are their greatest assets, and they utilize the element of surprise when attacking enemies. In other words: if you want to do things unexpectedly, the rogue is the role you should pick.

Talion from the Middle Earth games is an excellent example of this role. Although he can control enemies, use a bow, deal out damage, and deflect incoming attacks, there is something much more satisfying when he does things stealthily. His silent attacks can even kill most enemies instantly. After all, both Middle-earth: Shadow of Mordor and Middle-earth: Shadow of War games borrow elements from Batman: Arkham – a game series that encourages stealth and dodging.

Some characters from Payday 2 may also count as examples since the game has RPG elements for a first-person shooter game. Heisters such as Houston, Clover, Sokol, Sangres, and Joy are associated with perk decks that heavily utilize stealth and dodge tactics.

If you prefer casting spells and incantations instead of dealing out damage to your opponents, then the mage archetype might be a suitable role for you. Do not be fooled by its reliance on magic. Depending on its preferred spells, the mage can be the most versatile role you can pick. Some characters can use elemental magic, while others can cast healing or conjuration spells.

An excellent mage example is Aqua from Kingdom Hearts: Birth by Sleep. Although she also uses a keyblade like her fellow protagonists, Terra and Ventus, Aqua relies on magic more. She may not have Terra’s powerful physical attacks or Ventus’s impressive speed, but her fire, ice, and thunder spells are much more potent due to her high magic stat.

Maybe you enjoy playing the role of a fighter, yet you wish it has a higher health pool. In that case, the bruiser, sometimes referred to as tank, is the archetype you should pick. It has much higher health and durability compared to the fighter. Some bruisers in certain games can even deal out more damage or crowd control abilities. It makes them perfect for taking damage while simultaneously dealing it with enemies.

And although it makes the bruiser a great pick, this role has one primary weakness: mobility. Most bruisers in games are undeniably slower or lack more stamina when compared to other archetypes. Defenders from Pokemon Unite, such as Snorlax, Blastoise, Crustle, and Slowbro, are perfect examples. Although they have excellent crowd control skills, they generally move slowly.

These five archetypes are just some of the many roles you can pick when playing RPGs or MOBAs. Although they may have some weaknesses, you can make them up for it through your playstyle. You can even try unique combinations yourself by experimenting or combining different mechanics or features from each archetype! Just make sure to have fun and enjoy the game you are playing.