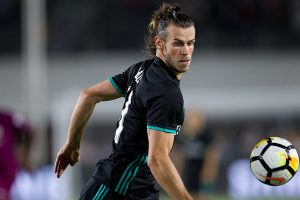 How rich is Gareth Bale?

Gareth Bale is one of the most expensive footballers of all time and one of the best Welsh people to have ever kicked the ball. He not only enriches the national team of Wales with his outstanding skills. Even at Tottenham Hotspur and Real Madrid, Bale was able to show his skills again and again in the past and won numerous titles with the Spaniards. He is extraordinarily fast, dangerous on goals and takes great free kicks. The cherished Gareth Bale’s net worth is 130 million euros.

When Cristiano Ronaldo left Real Madrid in the summer of 2018, Gareth Bale was the top earner among the Spaniards. His The gross annual salary is around 30 million euros. Currently, both clubs have agreed on a salary split due to the loan to Tottenham. Real and Tottenham pay Bale 15 million euros per year. The Welshman generates additional income from sponsorship agreements that he has concluded with his outfitter Adidas (23 million euros for 6 years), the video game company EA Sports, the drinks brand Lucozade and the British pay-TV broadcaster BT Sport, among others. With his annual income, Bale is one of the highest paid athletes in the world.

The beginning in Southampton

Gareth Bale was such a good footballer as a kidthat one of his first coaches only let him take part in games under difficult conditions. So Bale was not allowed to take the ball, but had to continue playing it, and he was only allowed to shoot at goal with his weaker left foot. In the summer of 2005, when he was 16, he joined Southampton FC, which had had him under surveillance for years.

In April 2006, just under a year after signing his contract, Bale made his debut for Southampton FC in the English second division. At 16 years and 275 days, he became the second youngest player to have ever played a competitive game for the club. At the end of his first 2006/2007 season, the Welsh became elected as the best young player in the English leagues below the Premier League. The country’s big clubs had long since had him on their list.

The most expensive soccer player in the world

In the summer of 2007, Gareth Bale decided to move to Tottenham Hotspur in the Premier League. His new club had to pay 14 million euros to Southampton FC for him. At the Spurs, however, Bale did not get into step initially, which injuries were not a small part of. It wasn’t until the beginning of 2010 that he finally had a permanent place in the team and contributed to Spurs qualifying for the Champions League for the first time in the summer of 2010.

From the 2010/2011 season, Gareth Bale was finally able to reach his full potential and became an indispensable player for Tottenham. If he had previously held the position of left-back, he now moved forward to the left wing and thereby played out his goal threat. In September 2013, Real Madrid announced they had reached an agreement with Bale and Tottenham to transfer the player. The Spaniards transferred 100.8 million euros to the English, making Bale the most expensive footballer of all time at the time.

At Real Madrid, Gareth Bale was repeatedly set back by injuries. When he was ready for action, however, he also showed his capabilities with the Spaniards. With the Madrilenians, he won the Champions League four times between 2014 and 2018, the Spanish championship in 2017 and 2020 and the Spanish Cup in 2014. When Zinédine Zidane became Real Madrid’s coach in the summer of 2016, however, he relied less and less on the injury-prone Bale. Even after years in Madrid, he was only moderately interested in integrating into the team.

Because of his relatively high salary and the contract duration until 2022, the chances of a transfer to another club were very slim. Nevertheless, as coach of Tottenham, Jose Mourinho tried to move the superstar to “White Hart Lane”. However, as of September 19, 2020, this was only realized with a loan for one year. Real Madrid should continue to pay half of the salary (15 million euros) to the Welshman and Tottenham “only” 15 million euros without an extra loan fee. It remains to be seen whether a fixed change will take place in summer 2021.