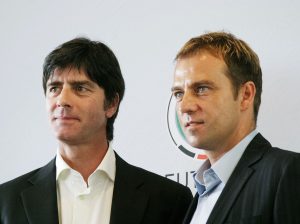 How rich is Hansi Flick?

Hans-Dieter “Hansi” Flick is a former soccer player and current coach of the German record champions FC Bayern Munich. Hansi Flick was born on February 24, 1965 in Heidelberg, Germany. During his active playing career, he played over 100 games for FC Bayern. After a few positions as assistant coach, he had his breakthrough in 2019 when he was promoted to successor and head coach after the dismissal of his predecessor Niko Kovac. The cherished Hansi Flick’s assets are 10 million euros. The current coaching contract with Bayern, which runs until 2023, was terminated in the summer of 2021 at Flick’s request and he will be the new national coach after the EM.

Career as a player

In his youth, Hansi Flick played for various clubs in his home region. At SV Sandhausen, the Heidelberger was appointed to the league squad in the 1982/83 season. The midfielder successfully completed three seasons there, so that FC Bayern Munich became aware of his achievements. There he got a professional contract at the age of 20 and over the next five years he played over 100 Bundesliga games for the most famous German soccer club. At his next stop at 1. FC Köln there were 44 games in three years – after that, his body thwarted his plans. After numerous injuries and physical problems, Hansi Flick became a sports disabled person. Way too early was the end of active professional football at the age of 28 – However, he never gave up his love for the round ball.

The coaching career of Hansi Flick

After his active playing career, Hansi Flick acquired his coaching license 10 years later in 2003. In his hometown, Flick coached FC Victoria Bammental. At TSG Hoffenheim (current owner: Dietmar Hopp) he was then supposed to ensure a quick promotion to professional football as a coach. After several failed attempts, 2005 was over – Hansi Flick initially moved back to the second link and worked in the coaching staff at Red Bull Salzburg. From 2006 to 2019 Flick was part of the successful coaching team around Jogi Löw in the German national team.

He then moved to FC Bayern and completed the coaching team around the Kovac brothers. After their dismissal in November 2019, the Bayern bosses gave Flick their confidence and appointed him interim coach. The success proved him right – initially those responsible decided that Flick should lead the season to an end. A few months later he was again trusted as his Coaching contract was extended until 2023. Since there were always disputes and differences of opinion between him and sports director Brazzo, the club was asked by Flick to agree to an early termination of the contract in the summer of 2021. It remains to be seen whether he will succeed national coach Jogi Löw.

As a player, Hansi Flick was German champion four times and DFB Cup winner once. With FC Bayern Munich, two more titles were added in the first season as head coach there. Together with Jogi Löw, he celebrated the 2014 World Cup in Brazil. In addition to various awards, Hansi Flick was able to win as Head coach of FC Bayern Munich set two records in the Bundesliga. Never before has a team won 17 competitive games in a row in German professional business. With 26 games without a loss, Flick broke another record. He was also two times German champion and won a DFB Cup.

Down to earth demeanor

Hansi Flick is known for his down-to-earth demeanor. As an assistant coach, he was in the background for many years. Even as head coach, he is far from staging himself in a media-effective manner and placing himself in the foreground. He lives with his wife in Bammental in the Kurzpfalz. He ran his own sports shop until 2017. In 2015, Flick made his residence in the Electoral Palatinate an honorary citizen of the city. With his income, the Bayern coach supports the “We Kick Corona” foundation, which supports social and charitable institutions during the Corona crisis.

When he took over the post of head coach at FC Bayern Munich, Hansi Flick rose to the ranks of top earners. In the first season, the Heidelberger earned around 3 million euros by the end of the season. After the Bayern bosses decided in April 2020 to extend their contract until summer 2023, they also adjusted the salary of their head coach, who was able to end his first season with a triple under special corona conditions. Hansi Flick’s salary at FC Bayern Munich was 7 million euros a year. In the summer of 2021, the contract was prematurely terminated after the renewed championship title and Flick will coach the national team and successor to Jogi Löw after the EM 2021.