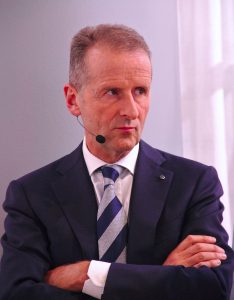 How rich is Herbert Diess?

Herbert Diess is an Austrian manager who was born in Munich in 1958. He has been CEO of the German automotive group Volkswagen since April 2018. He also holds several positions on the supervisory board. He is chairman of the supervisory boards of Škoda Auto, Seat and Audi and a member of the supervisory board of FC Bayern München AG. His successful career began with studying automotive engineering at the Munich University of Applied Sciences. At that time he laid the foundation for his managerial work and career. Today he is the top earner in the German share index (DAX). The cherished Herbert Diess’ assets are 65 million euros.

Herbert Diess began his studies at the University of Applied Sciences in Munich at the age of 19. there he studied automotive engineering up to the preliminary diploma examination. The talented manager then decided to study mechanical engineering at the Technical University of Munich. Since 1983 he has been able to call himself a graduate engineer. He then started working as a research assistant at the Technical University of the Bavarian capital. There he worked for five years at the Institute for Machine Tools and Industrial Management. In 1987 he successfully completed his doctorate in engineering – his doctorate dealt with the development of automated processes in assembly. In addition, he has headed the university department for assembly automation since 1988.

After five years of scientific work at the Technical University of Munich, Herbert Diess decided to switch to business. He spent the first seven years at the traditional German group Bosch GmbH in Stuttgart. Since 1990 he has been the head of planning & maintenance in a Spanish Bosch plant. In 1993 he even took over the technical management of the plant. In 1996 he switched to the German automobile company BMW. There he was responsible for managing various plants and business areas. In the year In 2007 he was appointed to the Board of Management of BMW AG and was initially responsible for purchasing and suppliers. From 2012 onwards, the Austrian was involved in the development business field.

At the end of 2014 it became known that Herbert Diess had switched to Volkswagen AG. At that time, Martin Winterkorn was still the CEO of VW, a little later that became Millions of manipulations in the emission tests of diesel cars known. This cost Winterkorn his post. A few months after Diess joined VW, he was appointed to the management board Board Member for the Volkswagen Passenger Cars brand transfer. As a proponent of electromobility, Herbert Diess drove forward the development of Volkswagen AG in this regard.

in the In April 2018, Volkswagen AG announced that Herbert Diess would be the new CEO of the entire group – to date the high point of his career. With the exception of Ferdinand Piëch, no head of VW had more powers than Herbert Diess. In 2020 he gave up the management of the core brand VW in order to have more freedom as CEO. In 2018, the VW boss received an award from CEOWORLD magazine. This described Diess as one of the best CEOs in the world.

With the rise to head of Volkswagen, Herbert Diess has moved up into the ranks of Germany’s top earners. In his first year in office, he received almost 8.5 million euros, which consisted of a fixed salary, pension entitlements, bonuses and variable remuneration. In 2019, his salary continued to rise. Herbert Diess earned an annual salary of 9.9 million euros and was thus the manager of a DAX group with the highest annual earnings. The Munich native stayed just below VW’s self-imposed limit. In the past, those responsible stipulated that the CEO may earn a maximum of 10 million euros per year.

The supervisory board positions

Herbert Diess’ main activity is the chairmanship of the board of management at Volkswagen AG. In addition, he is Chairman of the supervisory boards of Skoda, Audi and Seatall of which belong to the Volkswagen Group. He is also a member of the supervisory board of FC Bayern München AG and receives corresponding remuneration there. This is how the manager continues to increase his wealth.