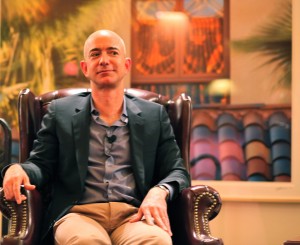 How rich is Jeff Bezos?

Bezos is one of the richest people in the world thanks to the business figures that the e-commerce giant Amazon has been able to present over the past few years. The Jeff Bezos’ net worth is € 172.75 billion. On October 27, 2017, the Amazon boss replaced Microsoft founder Bill Gates as the richest man in the world. Despite the most expensive divorce in the world from his wife MacKenzie, who now owns a fortune of – euros, he remained number 1. It was not until September 29, 2021 that Tesla and SpaceX boss Elon Musk replaced him as the richest person in the world.

In the third quarter of 2021, the previous AWS boss Andy Jassy took over the helm as CEO at Amazon and Bezos becomes chairman of the board of directors, so he continues to steer all major decisions in the group. The Amazon founder flew into space for the first time on July 20, 2021 with his space company Blue Origin.

The incredible fortune of the Amazon boss

In recent years, Jeff Bezos has overtaken some of the greats such as the billionaire brothers David Koch and Charles Koch, who are known in the USA above all for their great influence on politics there. No one else could have increased his wealth in one year as much as Bezos. Even Facebook’s Mark Zuckerberg and Google founders Larry Page and Sergey Brin couldn’t achieve what Amazon had done under Bezos’ leadership. It is to be expected also in the future that Amazon continues to increase its sales every year can and the share continues to hit a new record high. Only tech giant and Tesla boss Elon Musk continues to duel for the top of the richest people.

The richest person in the world – how much money does Jeff Bezos really have?

The success story of Amazon, however, did not begin until 1994. Like many of the most successful and well-known companies in the USA, Amazon started out in a garage. On the way from New York to Seattle, which Bezos drove in 1994, he worked out the entire business plan for Amazon. Completely convinced of his idea, Bezos devoted himself body and soul to his new companies. In doing so, he left his highly paid job at a New York hedge fund. During his time on Wall Street, Jeff Bezos had recognized exactly how rapidly the Internet and with it Internet trade was developing. When the US Supreme Court ruled in the same year that mail order companies did not have to collect VAT from their customers in states where they were not based, Bezos sensed his unique opportunity – Amazon was born and Bezos was to be right.

Over the years, Amazon has bought up a large number of companies and startups. These were often very strategic decisions by Jeff Bezos and always had the background to make Amazon the market leader in other business areas.

The most important Amazon acquisitions sorted by price:

Incidentally, the Amazon boss bought the well-known in 2013 through his own “Nash Holdings LLC” The Washington Post newspaper for $ 250 million.

Next to Amazon involved Bezos also privately at various startups. He invested wisely, including in Google. Bezos sold the Google shares after going public.

The richest person in the world is getting a divorce from his wife. Both announced this on January 9, 2019 on Twitter. The Bezos couple had been married for 25 years and then the end followed. In your statement, they say that they had a great life together and are looking forward to a wonderful future – as parents, friends and partners in companies and projects. That at least points to an amicable separation on the good side. Jeff Bezos met MacKenzie in 1992, and they got married just a year later. Together they have four children, three sons and an adopted daughter from China. The couple agreed that MacKenzie would receive 25% of the joint Amazon shares. This means that even after the world’s most expensive divorce, Jeff Bezos is still the richest person in the world. The fortune of his ex-wife MacKenzie Bezos is currently – Euro.

2015 was a really phenomenal year for Amazon boss Jeff Bezos. You just can’t put it another way. The CEO of the well-known e-commerce group was already rich, but in 2015 he was able to pocket a lot more money. By the beginning of 2015, the American was worth almost 35 billion US dollars, making it the 15th richest billionaires in the world. Amazon was able to write real record numbers this year, from which Jeff Bezos in particular benefited. In just one year he nearly doubled his fortune. Because the Amazon boss earned a full 29.5 billion US dollars in 2015 alone. Jeff Bezos is now even richer than the Koch brothers, which has caused quite a stir among American billionaires. In 2015, Jeff Bezos rose from 15th place to 4th place – he became the fourth richest person in the world at the time. Today he is the richest person in the world.

So the Amazon boss has a good day per day Earned $ 80 million to be nearly $ 30 billion richer by the end of the year. Bezos earned $ 56,125 per minute. So we’re talking about sums per minute that many other people don’t earn in a whole year. In 2015 alone, share prices doubled and there were 53% more Amazon Prime members worldwide than in the previous year. Besides, Jeff Bezos’ wealth is of course measured by his equity stakes. So he doesn’t just have these billions lying on the high edge.

Fall of Amazon shares in early 2016

After the record close in 2015, however, Amazon shares fell significantly again at the beginning of 2016. As quickly as Bezos made the billions in 2015, things went downhill again at the beginning of 2016. So He lost a whopping $ 6 billion in a single day. When more than 90% of the assets are in stocks, there are rapid and strong fluctuations, both upwards and downwards.

But 2017 made up for the previous year. Amazon boss Jeff Bezos made it in October 2017 richest person in the world to be. An unbelievable result that Bezos achieved with the mail order business. He is likely to continue to make incredible profits with Amazon and so his fortune continues to grow.

In 2015, the renowned “New York Times” reported in the USA about the supposedly inhumane working conditions at the mail order company. Amazon was confronted with serious allegations, according to which employees were treated as anything but fair and humane following family tragedies or misfortunes in their health. Compassion is completely lacking in this company and so it is not surprising that tears are almost the order of the day in the Amazon logistics centers. An 80-hour week and the regular email terror on Amazon allegedly increased the suffering of the employees considerably.

Of course, Jeff Bezos could not and did not want to let such headlines sit on him and therefore spoke up himself. This maneuvering of the employees is alien to him and that is an Amazon that Bezos does not know in this form. In an open letter, Bezos therefore addressed the world and his own employees. Any complaints or allegations from among his own people may be referred directly to him or the HR department. Jeff Bezos made it clear that he would not tolerate this lack of empathy. At the same time, he also emphasized the fun that many of the employees experienced every day at work at Amazon. The charismatic CEO’s relenting seems to have indeed paid off. Because numbers don’t lie and Amazon was able to keep up with the third quarter of 2015 Record sales to lock. So the customers of the e-commerce giant don’t seem to give much in to the negative headlines.