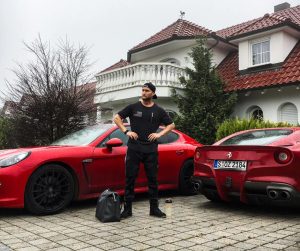 How much money does Karl Ess really have?

Karl Ess is probably one of the best known Fitness YouTuber in the German-speaking area. He is known for his vegan lifestyle as well as his direct manner, with which he not only made friends. In addition to publishing videos, Karl Ess is active in numerous other business areas. He sold his own fitness program, was involved in a clothing company, brought a book onto the market and much more. That way he was able to Assets of 5 million euros accumulate. The richest YouTubers show that you can really make money with videos. Even if Karl Ess is not the richest among them, he can be more than proud of his fortune. Who knows, maybe one day he will get hold of the income from Pewdiepie & Co.

Half German, half American

Karl Ess was born on September 13th, 1989 in Seattle, Washington. His mother is American, his father German. The two met on a trip to New Zealand. Karl Ess also has a sister. He came to Germany as a child, initially to Bavaria. In the second grade of elementary school he then moved to Baden-Württemberg and later went to the Rupert-Neß-Gymnasium in Wangen. In the 10th grade he moved to an American high school before he attended the business high school in Wangen in Germany. It was there that he met his future business partner Ralf Sättele. After school, Karl Ess spent six months abroad in South America. Back in Germany, he got by with various jobs, such as moving furniture. He then started at the University of Stuttgart To study industrial engineering. In the technical part he specialized in civil engineering, in the economic part in real estate.

Karl began his sporting career at the age of 13 with the men’s gymnastics community Wangen, where he did apparatus gymnastics for three years. Inspired by his father, Karl then started riding a racing bike. During this time he was also an avid soccer player, playing for 9 years in total. He gave this up when he met American football in high school in the United States. In the winter months, Karl was particularly enthusiastic about skiing. He came to bodybuilding at the age of 15, however, could not achieve the desired results in the first few years.

However, when he set clear goals and trained according to plan, he noticed the first changes. Then he dealt more intensively with the matter. He reached his first peak form at the age of 19, then stopped training for 2 years because he was influenced by his friends. These friends told him at the time that he was already too trained, which is why he then focused on endurance training. Only with that Start of his YouTube channel on April 13th, 2012 he started going more into bodybuilding again. Gradually, he also stopped eating animal foods and has been a vegan for several years. He always turns this lifestyle outward in his videos and tries to bring his viewers in this direction.

How much does Karl Ess earn? – Its lines of business:

Karl Ess has already opened up numerous branches of business and is or was involved in various companies. He himself stated monthly sales of 800,000 euros close. But through which areas does this turnover result or are these values ​​even realistic?

Karl Ess became famous for his YouTube videos. His main account now has over 378,000 subscribers, his second account “Karl Ess Lifebuilding” over 75,000. Overall, he has already collected over 135 million views with his two channels and has uploaded over 2,500 videos (many of which have already been deleted due to image problems). Karl earns around 7,000 euros a month through advertisements solely through his calls. Because he has been in the YouTube business for 5 years, this naturally brings together a large amount. Of course, he could gain most of his fortune in other lines of business. Karl Ess is also very successful in other social networks. He has over 640,000 “likes” on Facebook and 170,000 followers on Instagram.

2 Income from his fitness program (sold)

One of Karl Ess’s most important sources of income has long been his fitness program “Bodywork360”. There are numerous different models, ranging from 30 euros to 500 euros, depending on the scope and duration of a program. Around 30,000 people visit the site each month. Only a fraction of the visitors buy one of the packages, but that’s enough to make a lot of money. From 2014 to 2017, the program is said to have made a turnover of 3 million euros. In 2018 the project was sold on to investors.

Together with Mischa Janiec, Patrick Reiser, Ralf Sättele and Mic Weigl, Karl Ess built “Profuel”, probably the best-known Vegan Supplements Company in Germany. The first product on the market was a training booster called “Tunnelblick”, which is supposed to give you more strength and focus in training. The product range now includes everything from amino acids to protein bars to various vitamins. Due to disputes between the founders, Ralf Sättele has been the sole owner of Profuel and bought the shares of the other founders. Karl Ess made a healthy profit, but withdrew from the business completely.

Karl Ess ran it together with Ralf Sättele, Philipp Deslandes and Aleksandar Duric Fitness fashion label “Gym Aesthetics”. (Shares 25% each) The company was founded in the summer of 2013 and has enjoyed enormous popularity ever since. This could be seen above all at FIBO, the trade fair for fitness, wellness and health in Cologne, where the stand was stormed by several thousand fans. At first there was only one men’s collection, but now there are also women’s clothing and compression underwear called “Snakeskin”. “Gym Aesthetics” is known for its bright colors and large logos or graphics. Hoodies, stringers, tops, shorts, leggings and bracelets were sold. In 2017 the company was sold to an entrepreneur in Bangladesh for 4.6 million euros. Karl earned 1.25 million euros on the sale.

Also one second brand called “SHRRD” was establishedwho should focus more on streetwear and casual looks. The first shirts featured the fitness supermodel Larissa Reis from the USA, the new shirts are a bit simpler. A jewelry collection was also launched under the label. “Gym Aesthetics” works closely with athletes and fitness YouTubers, which is why a very wide range could be achieved relatively quickly. The brand has now completely disappeared from the market.

Since 2016 Karl has been involved in Yuícery with his company EssCom GmbH, which is divided into three corporate branches:

In September 2020 the new book “The best year of your life” will be published – 12 simple steps for more personal success, where Karl with his new image as a self-proclaimed “life coach” wants to help people develop their positive energy and leave negative events behind. We already think in advance that the new book should attract even more people to the “Life Building” program.

Karl Ess brought this back in October 2016 Book “Karl Ess: Our future eats vegan” on the market. In the book, Karl explains why he is a vegan, clears up myths and prejudices, shows recipes and how you can find a vegan lifestyle in three weeks. The book was discussed by numerous media and received very positively. According to Karl, the money he has earned does not go to his account, but rather goes into filming documentaries. The book is no longer available.

In recent years, the YouTuber has made a blatant change that his fans have also been able to observe. The latest idea: a “Life Building” program. An exclusive coaching of established and also budding entrepreneurs who should quickly generate even more income with the help of the serial founder. With various free videos and initial interviews, it quickly becomes clear that you have to deposit money first. The entrepreneur himself holds 90% of the company “Life Building Education GmbH”)

At the end of 2014, Karl Ess announced that it would be opening his first own fitness studio. It’s about that Studio Fit Onewhich opened in Stuttgart. It has 6 floors and an area of ​​more than 6,000 square meters. The Fit One offers different areas, such as a free weight area, a cardio area, a CrossFit area, saunas, solariums and much more. The prices are very moderate for a studio of this size and range from 18 to 38 euros a month. Fit One is now a chain with around 30 studios in many German cities. As it turned out later, there was no participation, but Ess only acted as a promotional ambassador.

According to the website’s legal notice, the studios are operated by the Harlequin gaming and entertainment machines Betriebsgesellschaft mbH operated. Nonetheless, this company also flushed enough money into its account and continued to increase its wealth.

Karl Ess has already advertised various things under his videos, from normal Amazon affiliate links to penis pumps or online lotteries. In particular, the application of penis pumps earned him scorn in the scene, but should have more than paid off financially. He has also been criticized several times because of the online lotteries. Karl Ess explains that he used this money for good things like building his vegan supplements line. According to his own statements, he has in between with such advertising Earned 20,000 and 30,000 euros per hour. There was also advertising for an online drugstore, in which Karl Ess is allegedly also involved. However, there are hardly any affiliate links among his new videos.

Karl Ess really burned his fingers on the subject of Vemma. Vemma stands for vitamins, essential minerals, mangosteen and aloe and is said to be a special measure healthy energy drink being. Vemma’s products are only sold through its own website, but they are advertised through independent sales partners who receive rewards for sales. Newly recruited customers can also join as sales partners, whose sales are earned by the person who recruited them. Vemma was quickly suspected of setting up an illegal pyramid scheme, which the company calls multi-level marketing.

Karl Ess was convinced of the product and used its reach to sell it, which earned him a lot of criticism. Stern TV also took on the topic, the image of Karl Ess was pretty badly affected. In retrospect, Karl Ess says that he was dissatisfied with the way the affiliates were treated because they were marketing the product incorrectly. He himself got a Losing business made in all areas.