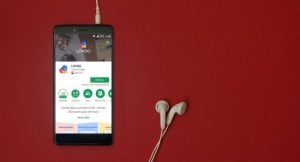 Are you looking for a dating app that also has the salient features of a social network? Then you can only choose Lovoo.

Lovoo is an application, born in Germany in 2011, which today has six million registered users worldwide. Downloading Lovoo is free, so the basic functions are all without limits of use. As for the more advanced options, there is the premium version, which we will talk about later. Lovoo, unlike other apps and similarly to social networks, is available both as a website and as an Android and iOS application. It also allows access even without having to register specifically, but using the Facebook account.

How does it work? 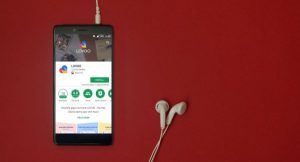 Once you have registered, you can immediately establish your interests (men, women, indifferent), the age range to which you intend to apply and your geographical position.

The first aspect that Lovoo is interested in is to guarantee the authenticity of its members: therefore, every time a new user signs up, he is provided with a code which he will have to transcribe on a sheet, then he will have to take a photo in which the code and his face are clearly visible and finally send everything to the Lovoo staff.

The image is used only and only to verify that the user is not a fake, therefore it will never be published or made visible in any way to third parties.

Like other apps, Lovoo also finds partners through geographic proximity between users. However, unlike others, it gives everyone the opportunity to “discard” users who do not fit their taste, just scroll the image to the right. Moving to the left, however, you can give a “like” to the user you are interested in. Not only that: another fundamental feature of Lovoo concerns the possibility of sending a message without the other having already shown interest.

This mode is called “icebreaker” and serves, as the name implies, to break the ice, to get noticed and known without waiting for the other to show an interest in us. Warning: each user has a limited number of icebreakers per day, so it’s good to make the most of your opportunities.

In the event that the icebreaker does not bring the desired results, the Lovoo team undertakes to give the user useful advice to improve their performance and thus obtain the interest of the other user.

One of the main features of Lovoo, which differentiates it from other apps but brings it closer to the most common social networks, such as Instagram, is the so-called “live video”, or a sort of live video, in which users can talk about themselves and make yourself known beyond the common mediums featured in a dating application, namely photographs and chat messages.

Live Video, which is available for both basic and premium users, is a specific choice of Lovoo, which – referring to its motto “Play it real” – wants its users to have the feeling that they really know others. members. The integration of Live Video into a dating app is, as the team itself says, an innovation based on user needs.

However, there are precise rules to follow: pornographic or violent content, nudity or sexual intimations concerning minors are absolutely prohibited. It is also forbidden to show other people without their consent, to threaten, bully or harass.

Another prohibition concerns spam: it is not allowed to use the live for commercial purposes, to draw attention to other websites or services for sale. You cannot use vulgar words or make racial slurs. Failure to comply with the aforementioned rules may result in the deletion of unauthorized content or the suspension of the account. Depending on the severity of the violation, the suspension can be temporary or permanent.

On the other hand, users who watch the live can actively participate by leaving comments and talking, through them, with the person who is making the video in streaming. However, the user who is streaming the video must allow the other to participate as a visitor.

As already widely anticipated, it is possible to download and use Lovoo for free. However, choosing the premium subscription allows you to have important benefits. The first, for example, is to be able to acquire the so-called credits, through which it is possible to find out who has shown interest in us and who has viewed our profile. 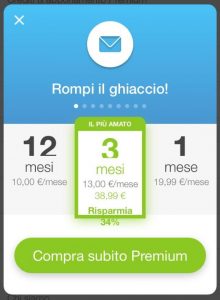 Not only that: owning the premium version of Lovoo means having an unlimited number of icebreakers at your disposal to be able to do many more matches, view all the likes assigned and then find your favorite users, become invisible, then visit the profiles of others without the others. know. That’s not all, because the premium version also increases its visibility, this leads to an increase in views by other users and, consequently, a greater number of matches. Finally, Lovoo premium is free of any advertising, for a faster and more practical use.

These are the costs of Premium: 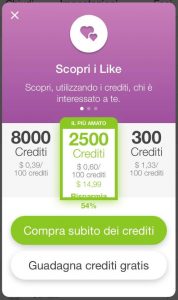 Lovoo is a serious application, so much so that trying to insert images that do not show the face, the application rejects the photograph after a few minutes. I like it because there is great user control, this avoids the possibility of encountering fakes. As for me, I recommend it to everyone, it is a modern and innovative app.

I had this app years ago, then I abandoned it because I found it a bit boring. I reinstalled it a week ago and can’t leave it anymore! I love the fact that now they can be done live! Now it can be considered a real social! You have the opportunity to talk to people live and you can have discussions like in real life. I like very much!

It’s always the same story. These apps are free, but in the end, to use them without any kind of restriction or block, you need to upgrade to the premium version. I honestly have no intention of paying to use a dating application. Everything is limited, the matches available are very few and I also have the impression that many profiles are fake, put there just to entice users to pay. And then there’s too much advertising, sometimes it’s really annoying.

As soon as I signed up, I was immediately blocked! I don’t understand why, my photos are real and I’m logged in via Facebook, so there shouldn’t be any problems. I took a tour on the web and read that I’m not the only one who has this problem, obviously the Lovoo team must work to solve it if they don’t want to lose users.

They promise to do a lot of checks with regards to live video, but that’s not really the case. I tried to make a live video and I only got dirty comments, so I quit. I hoped that this app would get closer to the world of social media, so as to make real acquaintances, but nothing, it’s yet another rip-off. They tried to make it different from the others, but in the end they also made it worse.

You can download the app and try to find your soul mate too, here for Android users and here for iOS users.