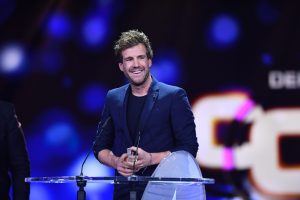 How much money does Luke Mockridge have?

Luke Mockridge was practically born with his talent. After all, the two parents of the Bonn-born comedian with Italian and Canadian roots are themselves involved in show business. Father Bill Mockridge made a name for himself both as an actor and as a cabaret artist. He founded the Bonn-based Jumping Mouse Theater. Many of the television viewers should know Bill from the WDR format “Lindenstrasse”. There he took on the role of Erich Schiller. Not only does Luke have good genes, he also has a talent that he knows how to use. The cherished Luke Mockridge’s net worth is $ 3 million.

The beginning of the career

Mother Margie Kinsky also practiced her husband’s profession and thus influenced the later professional career of her son. That Luke is one of six sons may surprise readers of these busy parents. Luke can be found with two older and three younger brothers in the middle of the sibling sequence. His brothers are also artistically active. You work as a model, actor, musician, singer and director. However, Luke’s career could have been very different.

At the age of 16, for example, the Bonn native received an invitation from Bayer 04 Leverkusen. He should complete a trial training at the professional football club. Today’s comedian, who can also play piano and guitar, did not embark on this career path. Rather, the godparents of the self-taught person seem to have had a decisive influence. None other than Hella von Sinnen and Dirk Bach have taken on these roles in Luke Mockridge’s life. His Bachelor in Media and Communication Studies Luke Mockridge received in 2012. He had previously studied in Germany, Canada and England.

A star in the German comedy sky

Luke was able to shine on stage while he was still a student in Canada. In “High School Musical” he slipped into the role of Chad. In Germany, the up-and-coming comedian had notable successes on his account from 2012 to 2016. At that time he was traveling across the republic with the solo program “I’m Lucky, I’m Luke!”. Luke Mockridge has also been seen regularly on TV in these formats and has given viewers some laughs:

In “1LIVE Hörsaal-Comedy”, however, Luke’s talent as a presenter comes into play. In “Switch reloaded” the half-Canadian appears as the author. In September 2013 he was also allowed to celebrate his own comedy show. The “Occupy School” format was shown on ZDF and KiKA. In March 2015 there is a program “Hatch! The week and me“Started on Sat.1. This also shows that Luke Mockridge is now taken seriously as a comedian in Germany. With all these TV engagements, the comedian continues to expand his fortune.

His new show “Luke! The Great Night Show “on Sat1. The late night show was broadcast for eight weeks. With his unique talent and a mixture of music, moderation, entertainment and comedy, the comedian delights TV viewers. Another major milestone in the young comedian’s career. Ambitious and ambitious, he seriously competes with his comedy colleagues Mario Barth, Oliver Pocher & Co. The 2nd season has already been commissioned and started in October 2020. With the fee for his show, he can further increase his fortune.

In the meantime, Luke even got the chance to stand in front of the camera with his father in “Murder with Announcement”. Luke Mockridge is one of the main cast on the comedy show hosted by Father Bill. These awards also show how far the comedian has made it in Germany:

Luke Mockridge will certainly make us laugh many more times and continue to inspire his viewers. We can look forward to the future. And with every appearance, with every show, Mockridge continues to earn money and can increase his fortune!

The streaming service Netflix grabbed Luke for a Christmas three-part series. The mini-series “About Christmas” can be seen on Netflix from November 27, 2020. For the comedian, this is also his first starting shot for an acting career.