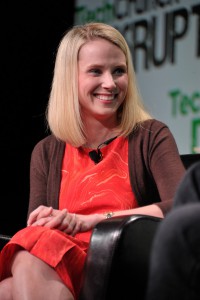 In the last few weeks and months there has been a lot of headlines about Marissa Mayer, and the question has been raised whether the woman at the top of Yahoo is doing her job right at all or should be replaced by someone else. The speculation about the possible sale of the internet shop also persisted for a long time. Until a buyer from Yahoo was finally found in Verizon. For a total of 4.8 billion US dollars, the group changed hands.

Whatever life may have in store for Marissa Mayer, she is definitely financially secure. Because with the departure of her CEO role at Yahoo, she receives a proud severance payment of 23 million US dollars and sells her block of shares worth almost 235 million US dollars, with which she her fortune of over 482 million euros then improved even more. Her husband and their three children also benefit from this. By the way, Marissa was previously in a relationship with Larry Page, another well-known figure from the tech world. At the moment, Marissa Mayer has to be seriously worried. Because even though she is financially in very good shape, the smart American has hired bodyguards day and night.

The big case of Yahoo

Because now that Yahoo is deep in the crisis, the threats against the woman at the top of the company are increasing. A loss of a good 88.5 million euros and a drop in sales of over 11 percent are simply hard to talk about. Even if no one can currently say exactly who is actually threatening Marissa Mayer, the police do indeed classify these threats as credible. The 15 percent of the workforce who have already had to leave Yahoo should of course not like the fact that personal protection for Marissa Mayer cost a good 487,000 euros last year alone. In this context, the Yahoo boss is even said to have been tough and almost inhuman with her employees. But does this hardened, arrogant manner really have to be?

The life and fortune of Marissa Mayer

The smart American, who now lives in Palo Alto, California, was already able to prove during her time at Standford, the American elite university, that Marissa did not fall on her head. By the way, before her role as CEO, Marissa was Vice President at Google Inc. active. The computer scientist, who currently has to endure a lot of and above all severe criticism, was one of the 50 most powerful ladies worldwide for the first time in 2008, according to the business magazine Fortune. Marissa was the youngest woman ever to secure this title. Newsweek named the Yahoo boss in 2009 as one of the “10 Tech Leaders often the future,” which now raises the question of whether Marissa would still receive this award today. Incidentally, the mother of three also worked at times in Europe, namely in Switzerland at a UBS research lab.

At Google, however, she was hired as the 20th employee and quickly became the face of the company. Above all, the design of the search function and the main page of Google were decisively influenced by Marissa, so that the American could successfully leave her mark on the Internet giant. If Marissa is indeed no longer at the top of Yahoo! Even if she is actually financially secure, she will soon be looking for a new job. After all, their penchant for luxury also wants to be financed. In July 2012, for example, Marissa Mayer is said to have bought 20 cashmere cardigans in one fell swoop. If you consider that such a cardigan alone cost the equivalent of 2,400 euros, then this was anything but an inexpensive pleasure.