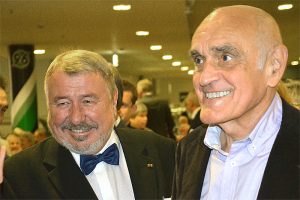 How rich is Martin Kind?

Anyone who knows Kind hearing aids may not know Martin Kind, but when you mention the name you should know that the family entrepreneur must be extremely rich. The man behind the largest hearing aid chain in Germany also has his fingers in the game when it comes to football, namely at Hannover 96. With his insane fortune, the clever entrepreneur is one of the richest Germans. The fact that a trained hearing aid acoustician could amass such a fortune came as a surprise to many people. After all, this is not a particularly glamorous job. So who would have thought that a man with his hearing aid shops could one day get richer than Hollywood stars like Jennifer Aniston & Co? But he succeeded. Martin Kind has an estimated net worth of 650 million euros.

Child owes a lot to its ancestors – and not just Swiss citizenship. Because his ancestors originally come from Chur in Switzerland and it was Martin Kind’s grandfather who emigrated to Germany and got married there too. The entrepreneur has had his foreign citizenship alongside his German citizenship since he was born. On the other hand, he owes the cornerstone of his later hearing aid empire to his father. The hearing aid shop that Kind’s father had previously founded the son took over in 1970. The son then turned this into a branch company, which in the meantime has even secured the title of market leader in Germany.

In addition, Kind Hörgeräte is the only supplier in this country whose products are partly manufactured in Germany. The saying “I have a child in my ear” has therefore already established itself in people’s minds in this country. It is therefore not surprising that the Kind Group generates over 170 million euros annually. A good 2,500 employees work for the group. You work for the company in 14 countries around the world.

The industry colleagues are also impressed by what Martin Kind has achieved. “Martin Kind is an absolutely straightforward, brilliant businessman,” said Günter Steinmeier, who is president of the Association of German Hearing Aid Acousticians, for example. In the meantime, Martin Kind is no longer just targeting the domestic market, but rather wants to be internationally successful with its hearing aids. So far, his clear goals and visions have always ultimately led him to the desired success. After all, 560 acoustic specialist shops are now part of the Kind group. However, Martin Kind always adapts its strategy to the current market situation.

In 2013, the group added another branch to its own branch network almost every week. Children don’t do that anymore today. Because even if more and more people in Germany are getting older, so that the number of people who need a hearing aid continues to rise, many branches cannot be the only key to success. Rather, Kind wants to become more independent of its suppliers and therefore takes them In-house production of hearing aids is increasingly targeted. Ultimately, this also means that even higher profit margins are possible for your own company.

The advertising slogan “I have a child in my ear. “After all, this idea did not come from the pen of the senior and the junior even has to persuade his father to make this brilliant move. So the future of the Kind Group looks bright.

In 1997, Martin Kind took over the presidency of Hannover 96 for the first time. At that time, the football club was in poor economic and sporting terms, the entrepreneur took care of the rebuilding of Hannover 96. Under Kind, he was promoted from the Regionalliga Nord back to the Bundesliga. The stadium was also rebuilt, now known as the HDI Arena. Martin Kind actually wanted to say goodbye to the presidency in 2014, but he will be in charge of Hannover 96 until the 2017/2018 season. His application from 2017 to the DFL, to override the 50 + 1 rule, so that the voting rights in the association could be taken over by investors, did not go through. It became known that the DFL would probably reject the application, which is why Martin Kind let it rest for the time being.