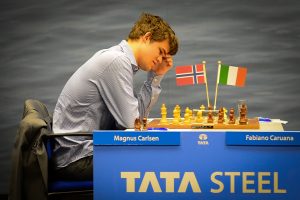 How much money does Magnus Carlsen have?

Magnus Carlsen has been the reigning world chess champion since 2013. If you consider that only a handful of chess players can make a living from their game, then this is Magnus Carlsen with an estimated fortune of 10 million euros an absolute exception. A clever marketing of his name is of course part of the success strategy.

At the age of five, the exceptional talent learned how to play chess from his father. In 1999 he played his first chess tournament. At the beginning of 2004 he secured all three grandmaster norms within just four months. Between 2009 and 2010 he was trained by the chess legend Garry Kasparov and became the youngest player (19 years old) to climb the FIDE world rankings. Since July 2011 he has been number 1 in the world rankings.

The greatest money can be made at world championships, which are only held irregularly. As a rule, there is usually only 5-digit prize money to be won in smaller tournaments. The top elite, however, receive a lucrative entry fee.

Magnus played in November 2018 against the US-Italian Fabiano Caruana in London for the world title. There was a total of around one million euros in prize money, of which due to the playoff the shares were distributed as follows: winners 55%, losers 45% shares.

An exclusive online chess tournament with eight chess grandmasters will be held from April 18, 2020 to May 3, 2020 and broadcast live on Chess24.com. The tournament was organized by the world chess champion himself and is called “Magnus Carlsen Invitational“And would like to use the time of the corona pandemic to make the sport of chess even more popular. Prize money: $ 250,000.

Carlsen receives a nice entry fee for taking part in show chess competitions. The simultaneous competitions are very popular, where the player faces several opponents on several chessboards at the same time.

In 2010 Carlsen signed his first modeling contract with the Dutch fashion label G-Star. His name has long been registered as a trademark in order to be able to market itself even better. The genius can earn even more money through lucrative advertising deals. A company of its own was also founded for this purpose

In the meantime, Magnus has also brought its own apps into the stores, so that everyone can learn chess and, above all, improve their skills. The three available apps are: “Play Magnus”, “Magnus Trainer” and “Magnus Kingdom” and are financed with in-app purchases.

Books and my own film

The young life has already been written and filmed. In addition, his company “Play Magnus AS” took over the e-book publisher Chessable in 2019 and participated in the online platform Chess24.