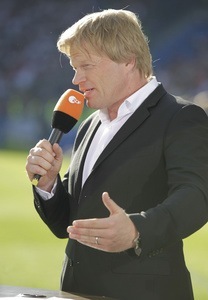 How rich is Oliver Kahn?

Oliver Kahn was one of the absolute top earners among professional football players in his time. Most recently (2008) he received a salary of 5 million euros per year at FC Bayern Munich, according to various sources. In addition to this considerable annual salary, there were bonuses from games played in the national team. With his basic salary and his various (still ongoing) advertising deals, these have added up to a sumptuous sum. The cherished Oliver Kahn’s assets are 35 million euros.

So you can say: “Oliver Kahn is rich”. Today the ex-professional can still be seen frequently in commercials. For example for the “Bruzzler” from Wiesenhof (bratwurst manufacturer), Euronics, MAN, DWS or for Tipico and WeightWatchers. These promotional deals keep his fortune growing. In addition, with “Goalplay” he runs his own company with around 30 employees, which sells products for goalkeepers and also trains goalkeepers in the USA and Asia.

On January 1, 2020, the Titan began operating as Member of the board of directors of FC Bayern München AG and thus returned to the old club. On January 1, 2022, he was supposed to replace the long-standing chairman of the board, Karl-Heinz Rummenigge, but this replacement will probably take place on July 1, 2021, as Rummenigge will leave his post earlier. He officially signed his first 5-year contract, but we assume that Kahn will retire after many decades as CEO of FC Bayern München AG. The salary in this position will definitely be in the seven digits.

The career of Oliver Kahn

Oliver Kahn in the ZDF Sportschau

Born on June 15, 1969 in Karlsruhe, Oliver Kahn began his career in the youth teams of the Karlsruher SC. At the age of just six years he registered with this club. There he played himself up in his youth until he was finally old enough at the age of 18 to be accepted into the club’s professional team. However, the young Kahn did not focus exclusively on football. He also performed well at school. In contrast to many of his football colleagues, he took the time to obtain his Abitur at the Helmholtz Gymnasium and also to study economics via a distance learning course, which he quickly abandoned. Despite his parallel football career – meanwhile in the senior team at Karlsruher SC – Kahn moved to a private university and completed his degree there General management with a master’s degree. With this degree, Kahn belongs to the academic elite among German footballers.

As the most expensive goalkeeper to Bayern

However, this did not mean that he was performing poorly in football. On the contrary, he distinguished himself at Karlsruher SC through such constancy and focus that FC Bayern Munich became aware of the young goalkeeper and bought him from the club for 4.6 million DM in the 1994/95 season. From this season Kahn should play for the record club until 2008, when he announced the end of his career. Today, the equivalent of 2.4 million euros may not seem like much, but until the 1994 season this was the highest sum that was paid for a goalkeeper in Bavaria. With that, Kahn also acquired the Reputation of the most expensive goalkeeper of all time.

With this team he should also be able to celebrate personal records. He was the player at Bayern who won the DFB Cup second most often after Bastian Schweinsteiger. He also accepted throughout his career a total of 643 league and international matches part. This means that he has always been an important part of the team, both at the national level and at the club level.

During the 2002 World Cup, where Kahn had actively contributed to reaching the final, he was awarded the golden ball award. However, his career also had its downsides. On the one hand, because of his tall and broad stature, he was repeatedly compared by opposing fans to a gorilla, so that banana peels were thrown onto the field of play. These insults often hindered the game. On the other hand, there was an energetic long-distance duel between Kahn and Lehmann under coach Jürgen Klinsmann, as Klinsmann forbade himself to clearly prefer either of the two.

Biography and expert at ZDF

In the meantime, after his career, Kahn wrote an autobiography with the title “Number One”, as well as another book “Ich. Success comes from within ”, as well as the youth book“ You can do it! How you can do what you want ”. These books, of which there were paperback and hardcover editions, sold well in some cases and, like his commitment, carried as Expert in ZDF sports broadcasts further to increase his existing assets. The contract with ZDF runs up to and including EM 2020 and only ends after that. At Bayern games, however, the Titan will not act as an expert.

The property and assets of Oliver Kahn

Oliver Kahn bought himself in 2008 a 3,600 square meter plot of land for 4.5 million euros in the Munich suburb of Grünwald. There he bought a luxury estate. The purchase was very controversial in the region, as a children’s playground had to give way for the house, which was very popular with children. The acquisition of the property was important for Kahn because the landlord of the villa, in which Kahn had previously lived as a tenant, had, according to “Bild”, registered his own needs and therefore Kahn had to move out.

During his active time, Kahn drove various models from Audi (including an A6), one of the main sponsors of FC Bayern Munich. In his private life, however, the world footballer has one red Ferrari F1 Spider granted. But he is known for his sporty driving – not just on the autobahn.