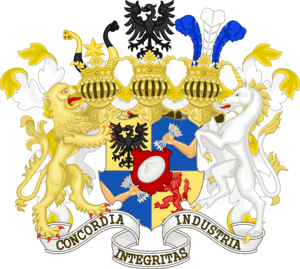 A class struggle has begun – the two adversaries are named Rothschild and Putin. Two political ideologies collide, the question arises as to which one will be victorious in the end – humanism or capitalism. Will humanity triumph over greed in the end? Or does it mean that the ruse of greed transcends “naive” humanity? Rothschild embodies moneythat is not used as a means of payment, but as a system: be it as a commodity, as a means of speculation or as a means made available by a higher power that enables the implementation of one’s own interests. “Your own interests” are incontestable, the aim is to achieve this goal, no matter what the cost – including the financial ruin of the working population or the extermination of peoples. After a short research into the Rothschild family, one can quickly see that the Rothschilds have been one of the leading representatives in the bond business since the Congress of Vienna (which took place in 1815). For example, bringing in the Rothschilds was mandatory for the creation of the first railways, which clearly shows a certain historical relevance.

However, the bond business was never the only interest of the Rothschilds, it has always been a matter of coupling political interests with financial ones, so the Rothschilds have always relied on politically ambitious people who acted in their interests and thus ensured that behind power, which, in case of doubt, will decide about war and peace, has a solid financial backing.

In more recent editions of current encyclopedias, for example, this note is completely absent – one can only speculate why. It remains to be seen whether the Rothschilds really decide on “war and peace”, but just recording the scope of this possibility suggests certain consequences, including with regard to data collection. In 2014, a year of upheaval, there was a much-noticed article from Focus, which was also realized due to the increasing pressure in the population, so the editors were encouraged at this time to write about the power of capitalism in the USA in July of this year , represented by the “Rothschild” system, which essentially states that although money rules the world, there is still an authority above mere wealth, namely the government authority – whoever rules money, the rest around it doesn’t really matter . Mayer Amschel Rothschild (1744 – 1812) formulated this thought of his time very directly and probably very aptly when he spoke of the fact that whoever controls the currency of a nation does not care who makes the laws. Mayer Amschel Rothschild is the founder of the Rothschild banking dynasty – and he knew what he was talking about, because he enjoyed this control throughout his life. Conversely, this means that there is no state-instituted power in the Rothschild system, and if it does, then only in the form of a state without resistance and thus helpless. In this system there is no sustainability, there is no educational mandate and no human rights, there are only business, deals, monetization and exploitation – until there is only scorched earth everywhere.

When Putin came to power in Russia 15 years ago, the country was economically devastated. Russia had become the prey of international high finance – also through the aftermath of the Cold War (which many political scientists claim is still happening). A tattered, powerless, poor state and a great famine resulted. The great capital of Russia lies in natural resources, especially in the valuable raw materials oil and gas. Those were, however, “tax-friendly” removed from the country by large corporations and the Russian state only had a negligible fraction of these profits.

Putin, however, cleaned up – already in the first inaugural meetings he made it clear that he would put his full strength into this penalty. In the course of these developments, he disempowered the oligarchs (at least the well-known and thus dangerous), nationalized key positions in the oil and gas industry and trades in the raw materials exchange in St. Petersburg, which was founded especially for this purpose, in the Russian currency ruble, not in dollars. The huge Russia has never been a state that has pulled together, far too many smaller peoples are represented in this construct, each with their own ideas and wishes, and according to their self-image, these countless small population groups do not want to be a unified country For this reason, Putin enables all peoples to have the right to self-determination. The powerful people also have money accordingly, and Vladimir Putin’s fortune has also increased.

Preserving identity and enforcing this right to self-determination is very important to Putin, as he always emphasizes, certainly also for the reason that this preservation guarantees him the sympathy of the majority of the population. These two powers had already had an interlude in the past, when Putin broke up the Khodorkovsky oil cartel in 2003 and had those responsible arrested, the shares in this company passed to Lord Jakob Rothschild. From then on, Rothschild controlled the approximately 13.5 billion US dollar shares in the oil company. Thus, the entire Western world is in the process of upheaval, while the secret of the money nobility and the dollar elite, including the FED pullers, was a topic that was only discussed under the table for decades and was generally well guarded, is now becoming more and more bright Minds attentive to these conditions. The Vladimir Putin system has long since taken the decisive step to stand out as a counterpoint to this movement and to establish close relationships with those who think alike. Mass protests that have occurred more and more frequently in the whole of Europe in the recent past also announce enormous anger and dissatisfaction, with which it can then finally be foreseen that an enormous dissatisfaction with these systems will emerge in the entire western world, which in all likelihood will lead to a major phase of upheaval will lead, which will overturn the circumstances accordingly.

At this address, a detailed discussion of this topic can be read in the form of the FOCUS article mentioned above: http://www.focus.de/finanzen/boerse/das-kartell-verschwoerung-oder-hirngespinst-wie-die-us-otenbank-die-weltfinanz-manipetzt_id_3995856.html