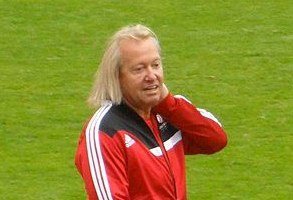 How much money does Robert Geiss have?

The well-known television star Robert Geiss is very successful as an entrepreneur. Geiss generated his fortune mainly through the sale of his shares in the specially founded sporting goods manufacturer Uncle Sam in 1995. Even today, the father of two has a high annual income of around 2 million euros. This is primarily due to the engagement together with his wife Carmen as a performer in the popular television show “The Geissen family“, Where the millionaire family presents itself for all of Germany. The cherished Robert Geiss’ assets are 30 million euros.

The beginning of wealth

Robert Geiss was born in the Rhineland in 1964 and co-founded the company in 1986 Uncle Sam the first company to manufacture clothing specifically for fitness athletes and bodybuilders. After the extremely successful first few years after the founding of Uncle Sam, Robert and his brother Michael sold the shares in the company. According to their own information, each of the two brothers was able to earn 70 million D-Marks (35.8 million euros). Shortly before the sale of Uncle Sam, Robert Geiss married his wife Carmen, with whom he can be seen today in the series “The Geissens – A Terribly Glamorous Family”. The show is broadcast on RTL II. Due to the popularity of this series, Robert Geiss and his family are known to many Germans.

The Geissens’ cars and real estate – where wealth comes from

The “Geissens” currently live there three luxury properties. The villa in Grimaud has since been converted into a hotel and opened in 2015. Robert Geiss also specializes in the sale of luxury real estate, which of course has further increased his fortune. Usually he buys real estate and renovates it. The houses and villas are then sold with a chic new interior. For example, Carmen and Robert Geiss did it with their holiday home in Kitzbühel. The luxurious chalet in Austria has eleven rooms and a living space of 650 m2. The new owner paid the Geissens a whopping 4.5 million euros for the chalet in Kitzbühel.

Which cars do the Geissens own?

Which boats (yachts) does Robert Geiss own?

It is often speculated that the Geissens only fake their wealth in front of the camera and actually there is nothing left of the money from the sale of “Uncle Sam”. However, these allegations were repeatedly denied by Robert and his wife Carmen. There was still enough money left of his 70 million DM at the time, and the purchase, renovation and resale of luxury properties also made a good income. For example, in 2014 the property in Kitzbühel (Austria), 650 m2 Living space with 2,600 m2 of land sold for 4.5 million euros.

With the proceeds from the property sale, Robert Geiss then fulfilled a dream and bought the Indigo Star Yacht. The two daughters Davina and Shania attend the International School of Monaco, which costs 13,180 euros per semester. The Geissens are therefore wealthy in any case. If you add up the fees for the episodes of the series Die Geissens, you get a high sum. How rich are the Geissens? If you look at their wealth, they are very rich! Robert Geiss can rightly call himself a multimillionaire.

Davina and Shania have long been earning their own money in the reality TV series and can already pay for their own luxury life themselves. In addition, both daughters have numerous advertising deals and, with their many social media followers, can also call themselves influencers. Shania herself is already a model and is also aiming for a corresponding modeling career. Davina, on the other hand, would like to make her own fashion under her initials “DG by Indigo Limited”. This immediately led to a lawsuit from “Dolce and Gabbana”, who use “D&G” as a trademark. The clothes are currently no longer available.

After selling his own fashion label Uncle Sam, Robert Geiss is back in the industry today. With his label Roberto Geissini Geiss is again offering clothing. Robert Geiss focuses on strikingly designed T-shirts in many different designs. In some interviews he emphasized that the new label was not necessary because of the money. Nevertheless, he is happy to take the additional income with him. Robert Geiss offers his new fashion in his own online shop and for sale on Amazon. The prices start here at 29 euros, with a large part of the fashion on offer being sold for a lot of money. In “Die Geissens” on RTL II you can see Roberto Geissini clothes again and again, Carmen in particular likes to wear her own branded clothes. But Robert also advertises his fashion and dresses with it. Today they are also earning a fortune with it again.

In spring 2014 Carmen Geiss was seen on the RTL dance show “Let’s Dance”. The appearance was financially worthwhile in any case. Then she received a fee of 135,000 euroswhich probably put a smile on the face of the less enthusiastic Robert Geiss. She made it to the semi-finals with her dance partner Christian Polanc and was only eliminated in the eighth live show. Carmen Geiss was not only able to increase the family fortune, but also its popularity. The fans especially admired her determination and ambition.

At the beginning of 2015, Robert Geiss advertised the product “Rich with Geiss” for the “Patriarch Classic Dividende 4 Plus” dividend fund. Behind the product, however, was not Robert himself, but rather Börsenmedien AG, which the celebrity millionaire only used as an advertising figure. Robert advertised the financial product with his beaming smile. The product is no longer available and the website is no longer available.

Since May 2015 there is also a hotel for the popular TV celebrities. In the small town of Grimaud, which is on the French Côte d’Azur right next to the posh town of Saint Tropez, Carmen and Robert have Maison Prestige Roberto Geissini opened his own hotel. In total, the hotel is home to three guest houses with a total of 15 very differently designed rooms and three pools. An overnight stay should cost between 150 and 800 euros. Breakfast is not included, however.

The documentary soap about the life of the Geissens already has cult status. The series has been running since 2011, when it was produced by Joker Productions GmbH. Geiss TV GmbH has been a producer since 2015, which means that the Geissens themselves earn more from the successful format. More remains in the Geissens’ till than if you have to pay an external production team. The fact that there are already 19 seasons of “The Geissens – A Terribly Glamorous Family” speaks for the success. Carmen and Robert Geiss can be seen on RTL II. The Geissens are now cashing in per episode 60,000 euros fee. But that is by far not enough, because RTL 2 should transfer a total of up to 2.4 million euros per season to the celebrity couple’s account. The reason for this is the high personnel costs. The “IndigoStar” alone devours around 20,000 euros per episode, not including board catering and other expenses.

This has also contributed to the Geiss family’s fortune in the millions. As a TV candidate, Robert Geiss receives a really hefty fee. But one shouldn’t ignore the other consequences of popularity either. The series also advertises Roberto Geissini’s fashion without any effort. This constantly brings in new customers who like the clothes worn by Carmen and Robert Geiss and who then shop in the Geissens online shop.

The Geissens and their lucrative advertising contracts

Thus, the Doku Soap is probably one of the most important sources of income, which generates a lot of additional business. Of course, others also use the popularity of the Geiss family for themselves. For example, Kay One once had a guest appearance on the series, he went to play golf with the family. But also for Advertising medium Robert and Carmen are of interest. In 2012 the dairy group Theo Müller (Müllermilch) hired the family for a commercial. The Müller Yoghurt Corner de Luxe was advertised. In keeping with the luxury image of the yoghurt, the advertisement was taken on the Geissens estate in St. Tropez. Carmen and Robert Geiss were also advertising ambassadors for Sonnenklar.tv and the price comparison portal Verivox. Even with these promotional deals, they continue to earn a small fortune.

The Geissens are also so popular because they are simply real on television. Authentic without pretending too much. Often there is also a quarrel and many a bad word thrown at the other’s head. But that’s what makes the family so popular, the viewer has the feeling of meeting real people. Of course, there is also some space to dream when you can go on a television trip with the Geissens. You can look at the most beautiful places in the world and catch a glimpse of luxury life. If you want to know more about the Geissens and would like to embark on the Robert Geiss successful course, we can give you a tip. The book “Nothing comes from nothing: On the road to success with the Geissens“Reveals more about their recipe for success. Carmen and Robert Geiss give lots of tips on how to get rich.