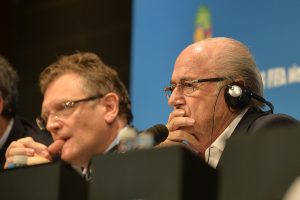 How rich is Sepp Blatter?

In recent years, Sepp Blatter has made headlines above all with the corruption allegations against himself. These even have one for the Swiss unwanted money rain brought in when a comedian wanted to draw attention to the grievances. Comedian Simon Brodkin used 600 real dollar bills to throw money at Blatter. The then FIFA President couldn’t laugh at this incident, while the audience present was quite amused. After this very public action at a FIFA press conference, the comedian was allowed to see the inside of a Swiss prison cell. However, he got his money back from the Swiss police.

In addition, the football association FIFA filed a criminal complaint for this action. That shouldn’t have mattered to the comedian, however. After all, he had achieved his stated goal. The image of Blatter and the unwanted money rain went around the world. And as not only the comedian knows, pictures like this speak a very clear language that is burned into people’s memories. Blatter also got a rain of money from FIFA. The estimated net worth of Sepp Blatter is 20 million euros. This wealth could in reality be much higher. The former FIFA President has cleverly arranged a lot – payments that are incomprehensible and certainly not public. Who knows how much money actually went into his pockets.

Ban imposed by the ethics committee

However, this action is likely to be one of Blatt’s least of all problems. After all, a court ruled in December 2016 that the ban on the former football official would be upheld. The International Sports Court (CAS) did not want to lift the ethical lock on Blatter, which had been imposed for six years. But how did Blatter actually get this ban? Dubious million payments to Michel Platini, the former head of UEFA, had led to an investigation against Blatter. That Blatter was once involved in the founding of the ethics committee turned out to be all the more bitter. After all, it was this commission that decided that Blatter should be banned from any football activities. Initially for eight years, with the Appeal Committee then reducing the suspension to just six years due to Blatter’s merits.

How much money did Sepp Blatter really earn at FIFA?

After the corruption allegations against Joseph Blatter, as Sepp Blatter’s real name is called, became loud, there was always lively speculation about his salary. Did the FIFA official really only earn one million euros a year? Blatter had at least hinted at this in the past. However, many critical observers assume that his salary may indeed have been higher. FIFA’s financial reports do not reveal Blatter’s exact salary either. The reports from 2015 only show that the 40 officials and directors of FIFA made a total of 40 million euros at the time. So that’s an average Sum of one million euros per person.

However, Sepp Blatter’s salary may not have been the pure average. During his service, the former football official had finally been able to look forward to further bonus payments. His official apartment in Zurich had also been paid for by FIFA for a while. Blatte was even allowed to use the FIFA luxury limousine including chauffeur earlier. However, the corruption affair put an end to this sweet luxury life. Now Sepp Blatter has to cover his expenses himself. Incidentally, the Blatter affair has meant that his successor’s salary is now to be made public. However, we will probably never know exactly how many millions of pages has earned at FIFA over the years. However, we were able to find out that Sepp Blatter is a got an estimated annual salary of 3.3 million euros at FIFA.

The life of the Swiss “Lord of World Football”

From 1998 to 2016, Sepp Blatter had an incredible career as a man at the top of FIFA. It is all the more regrettable that his career as President of the World Football Association had to end so bitterly. In connection with the scandal surrounding himself, Blatter also had one Pay a fine of around 47,000 euros must – peanuts for a man who has tens of millions in his bank account.

Incidentally, found Blatter his way to soccer as a player. From 1948 to 1971 he played actively and occasionally even in the 1st Swiss league. Sepp Blatter, on the other hand, has to blame Horst Dassler for his debut at FIFA, who later appeared as CEO of adidas. While the Swiss had been with FIFA since 1975, it would be a while before he could claim the post of President for himself.

Incidentally, throughout his time at FIFA, he kept repeating Allegations of mismanagement according to. As early as 1999, losses in the marketing area, which amounted to 94.3 million euros, were first questioned critically. However, the then FIFA boss quickly used his right of veto to sweep these allegations under the rug. At least his daughter Corinne from his first marriage is nevertheless convinced that Joseph Blatter did a lot for world football and that he will be positively remembered after his death at the latest. At least no one can take away the following awards from Sepp Blatter: