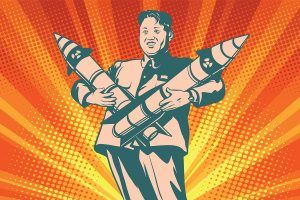 How rich is Kim Jong-un?

How can a man be so rich while his people are so poor? This is a question that can be asked of Kim Jong-un, the world-famous dictator from North Korea. After all, the “Supreme Leader” of North Korea has one Assets of 4.2 billion euros, while many of the people under him live in the poorest of circumstances. The controversial head of state of North Korea is also said to spend up to 500 million euros per year to enjoy his life full of luxury. Kim Jong-un is the dictator and head of state of North Korea, the “Supreme Leader” of the Democratic People’s Republic of Korea, Commander-in-Chief of the Korean People’s Army, Chairman of the DPRK State Affairs Committee and Chairman of the Labor Party of Korea.

Of course, these figures have not been officially confirmed. After all, it’s not even clear whether Kim Jong-un with his wife Ri Sol-ju, whom he married in 2010, actually has three children. Officials are actually very reluctant to make any binding statements. Kim Jong-un keeps his private life under wraps; his first child, daughter Kim Ju-ae, is said to have been born in 2010. Two more children probably followed, in 2013 and 2017. These rumors got through, but whether they are true has not yet been confirmed. The dictator’s fortune may even be higher, as we already know from Vladimir Putin. The actual wealth of the Russian head of state could also be higher than estimated. Nevertheless, the western world is fascinated by the man, but also frightened. Kim Jong-un has become a real horror figure and is an ever increasing threat to world peace.

A closer look at the wealth of Kim Jong-un

Kim Jong-un apparently lives in a law-free zone where he can do what he wants. Accordingly, he can also freely dispose of the Kumsusan Palace of the Sun in North Korea. It is the largest palace ever dedicated to a communist ruler. But that’s not all. Because the Ryugyong Hotel, which is located in the dictator’s birthplace, also belongs to the Kims dynasty. It is one of the largest hotels in the world. the Construction of the hotel by the grandfather of the current ruler should once be good Cost 625 million euros to have. After all, there are seven revolving restaurants, countless Japanese lounges and nightclubs, and several casinos.

The Air Force of North Korea is of course also subordinate to the dictator. Kim Jong-un was also responsible for the construction of the Masikryong Ski Resort. After all, the project is said to have cost 29 million euros. Rumor has it that Kim Jong-un could own a private island, which is also frequented by many US stars and starlets. At least that is probably just speculation. From his private golf course to an equally private luxury cinema, the dictator’s wealth doesn’t seem to know any real limits. Around 1,000 people should be able to be accommodated in the cinema for a relaxed film evening.

The love for western luxury goods

In 2014 alone, the dictator of horror is said to be proud Spent 13.25 million euros on numerous luxury cars to have. Overall, his collection is estimated at around 100 vehicles, although the import of these Mercedes limousines and other sledges to North Korea has not been approved by the international community. From imported whiskey and fine wines to the up to 20 pianos that Kim Jong-un is also said to own, there doesn’t seem to be any real shortage in the dictator’s life.

Submarines, private jets, yachts as well as the Pyongyan water park make up the wealth of Kim Jong-un as well. Even his designer cigarettes, the imported delicacies from abroad, the visits to his celebrity friends and the luxury gifts for his wife and closest adviser are likely to cost Kim Jong-un dearly year after year. By the way, Kim Jong-un is said to spend around 20 percent of the annual budget of all of North Korea on his horses. If you consider that North Korea is said to have had a state budget of 51.5 million euros in 2008, this is more than 10 million euros.

These frivolous expenses are said to have meanwhile even led to half of the North Korean population being malnourished. Kim Jong-un leads an absolute luxury life, rules North Korea and is now spreading fear all over the world. His missile tests in particular shake the world. Nobody can judge him, the dictator is becoming more and more unpredictable and you don’t know what else he will think of. Most of its people live in poverty. Meanwhile, Kim Jong-un lively uses a hostel in the middle of the German capital Berlin as a source of foreign currency. Abundant foreign exchange for North Korea is generated there. This man just seems to simply find his ways and means so that the source of wealth does not run dry.