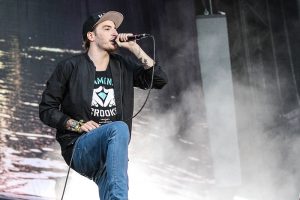 How much money does rapper Casper have?

If you think of the ghost when it comes to Casper, you probably haven’t listened to much radio in recent years. Benjamin Griffey alias Casper was able to land a few hits and was also convincing on album length. With his songs, concerts and merchandise articles, he has also been able to earn quite a bit. Casper has an esteemed Assets of 4 million euros.

Casper’s father was stationed as a US soldier in Exertal, where he met the rapper’s mother. After a short time they had a daughter. Benjamin Griffey, Casper’s real name, followed shortly thereafter. When Casper was one month old, his parents moved to Georgia, USA. The father earned little money, Casper and his sister live in one with the mother Trailer park in Augusta. Until Casper is seven years old, his father is always away for a year because he has to go to the front.

The parents finally separate, the mother meets a new man. But Casper’s stepfather has drug problems and is constantly in jail. Benjamin describes the household as violent. After numerous moves, the mother finally packed the children and in 1993 moves back to Germany. Casper was 11 years old at the time. At first the children believe that they are going on vacation with Grandma again, but when the mother suddenly speaks only German to them, a language they do not understand, they know that this time it will be different. In Bösingfeld, their new place of residence, they had to learn German quickly because nobody understands them in English. Although he is a quick learner, he claims to have dreamed in English into adulthood. He soon switched from secondary school to grammar school, where he graduated from high school. He then moved to Bielefeld to study education with a minor in psychology and a focus on media education. However, he never finished his studies.

Encouraged by a friend, Casper takes part in numerous freestyle events. There he meets the rapper Abroo, who in turn introduces him to Separate. The three founded the rap group “Kinder des Zorns” and in 2004 released the album “Rap Art War”. Because of differences in the crew, they break up. He argues with Separate because he is not on his label “Buckwheats Music ”wants to sign. After the first disappointing experience in hip hop, Casper formed the metalcore band “A Fear Called Treason”. He is also the co-founder of “Not Now Not Ever”, a hardcore band with whom he released an EP. In 2006 he returned to Hip Hop and signed with the 667 label – One More Than the Devil. He publishes the mixtape “The world hears me” and tours Germany. In 2008 his first solo album will be released “Towards the sun”Which, despite features from Prinz Pi and Kollegah, does not reach the masses. In 2009 he accompanied Prinz Pi on his neopunk tour.

In 2009 Casper announced that he had signed with the Selfmade Records label. Together with the other rappers of the label, Kollegah, Shiml and Favorite, the sampler “Chronik 2” appears. He reached number 15 on the album charts, followed by a tour. In October 2010, Casper announced that he would be with Four Music and no longer with Selfmade. The second solo album “XOXO” followed in July 2011 and represents the breakthrough as a solo artist. It achieved both gold and platinum awards. The impressions of the tour will be reproduced on the live album “The pressure is rising”, which will be released in July 2012. In September 2013 the second solo record “Hinterland”. It rises again to number 1 on the charts and again gold and platinum awards follow. The accompanying tour sells out within hours.

In 2015 he published, together with Montana Max and Markus Ganter, the project “Auz der Grvft” under the name Gloomy Boyz. Casper Lil Creep is called there, Montana Max appears as Lord Nakko and Markus Ganter is called DJ Krypt. The EP is sold through the online shop “Krasser Stoff”. However, fans have to wait until 2017 for another solo album. Maybe this is due to the Love happiness from Benjamin Griffey, because at the beginning of 2017 it is announced that he got married on December 30, 2016 in Las Vegas. His wife is no stranger, but the former “Germany’s Next Top Model” candidate Lisa Volz. She took part in the casting show in 2012 and finished eighth at the time. The two got to know each other while shooting the video for the single “Hinterland”, the couple lives in Berlin.

Casper’s path is paved with numerous gold and platinum awards. He is also a popular live artist and a popular act at festivals. But how did he earn his money? We clarify:

While the beginning of his career was rather sluggish, everything Casper touches has been gold or platinum since 2011. Both “XOXO” and “Hinterland” sold over 200,000 times and stayed in the charts for a long time. However, in addition to Four Music, Selfmade Records also earned on the albums, as Casper was actually supposed to release several albums there, but left the label prematurely. Therefore, Casper should only be around Earn one euro per CD sold. With the high sales figures, Casper still got a nice sum.

Casper was able to amass most of his fortune through his numerous tours and performances. His tours are always sold out, he fills huge locations. He takes action against the overpriced resale of tickets and even bought them himself. He is also booked again and again at festivals. Due to his hits in the mainstream, he appears at both pop, hip hop and rock festivals. Of course, he collects high fees for this.