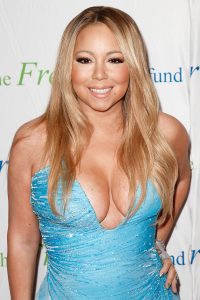 How rich is the singer Mariah Carey?

The singer has 18 number 1 chart placements in the US and over 200 million records sold worldwide. This makes Mariah Carey one of the most successful singers in current affairs. Mimi, as the fans affectionately call Mariah, did not get along during her career without scandals. In particular, the weight of the singer was repeatedly discussed in the media. Recently, the headlines turned around the broken wedding and separation from the Australian billionaire James Packer. Whatever it may be in her private life, Mariah Carey is definitely one of the most successful artists in the world. The Recording Industry Association of America announced something interesting. Mariah could have secured her place as the third most successful artist in the country based on her record sales in the USA alone. The singer was also able to win five Grammys. With a Assets of 290 million euros she is also one of the richest musicians par excellence.

She is the child of a singing teacher and opera singer. So it is not surprising that Mariah Carey discovered her love for music at a young age. Her parents separated when Mariah was just 4 years old. Back then, music is said to have helped Mariah a lot to cope with this very difficult situation for a child. While little Mariah was hiding under her covers, she tried to memorize the greatest songs on the radio. Even during her school days, Mariah focused more and more on music. After she finally got her high school diploma in her hands, she tried it first as a background singer. She survived financially during this time as a waitress, although she was never really good at the job. However, she was lucky enough to be signed by Columbia in 1988. This is how Mariah met her first husband, Thomas Mottola.

In March 1991 the time had finally come: Mariah Carey’s debut album made it to the top of the US charts. The fact that Mariah was allowed to appear at the 1991 Grammys was a fortunate circumstance that noticeably boosted record sales. At her very first Grammy ceremony, the newcomer was even able to take home two Grammys. With that she was in the pop-Olympus in one fell swoop.

After her debut album was only released in 1990, Mariah released her second album in the fall of 1991. She then went on tour to extensively promote this album. While Mariah was on the road a lot from 1992 to 1993, the studio recordings for her third album began in the spring of 1993. The singer was apparently unstoppable. “Music Box” was also able to storm the charts again and secure pole position. After that Album sold more than 32 million times it was one of Mariah Carey’s greatest achievements. This “Music Box” also became one of the best-selling and most successful albums of all time.

Between 1990 and 1999 Mariah Carey released a total of 9 albums. The albums have sold more than 122 million copies around the globe. However, the years 2001 to 2004 were then much less successful for the singer. Both her film “Glitter – Shine of a Star” and her album “Charmbracelet” could not produce the sales figures that were hoped for. In 2005 she made a comeback when Mariah’s 8th studio album was released with “The Emancipation of Mimi”. The music critics also agreed. Because the 48th Grammy Awards should become a true one Triumph for the singer will. That evening she cleared another 3 Grammys in one fell swoop. Many other career and private highlights followed in the years to come. Mariah Carey gave birth to her twins in 2011. In August 2015, she received a star on the Hollywood Walk of Fame.

Mariah has been successful in the music business for decades. She also records a new album every few years:

Mariah Carey was the first artist to land a number 1 hit in the US charts in 4 decades with her Christmas hit “All I Want For Christmas Is You”. The song was first released in 1994 and in January 2020 it is back at number 1. No other solo artist has ever reached this mark. It pulls past music greats like Michael Jackson, Stevie Wonder, Elton John or Madonna.