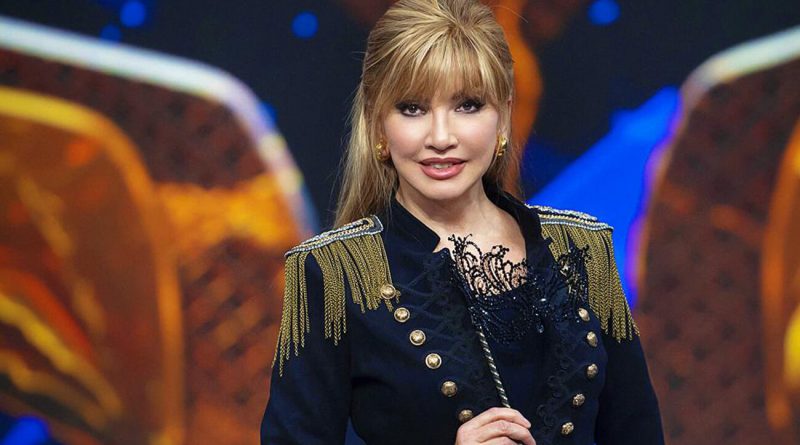 The Masked Singer is a musical show that starts on Rai 1 on January 29: nine famous singers they come on stage masked and therefore unrecognizable. Through their voice, their mask, and their performance the audience has to vote who stays in the game and guess who it is. The program is led by Milly Carlucci and the artistic director and choreographer is Raimondo Todaro.

P.to find out who the masks are the program also envisaged a team of investigators made up of 20 people, led by Sara of Vaira And Simone Di Pasquale two of the dance masters of Dancing with the Stars!

The Masked Singer: Masks and Singers

The mask of the Pecorella from Il Cantante Mascherato is Alessandra Mussolini.

The assumptions were: Francesca Fialdini, Mika, Loretta Goggi or Manuela Arcuri. The singer has declared that she has the determination of a lion but that lately she wants to bring out her romantic and more fragile side and that’s why he chose the mask of the sheep. Milly Carlucci added that La Pecorella has charm and is very romantic. The mask of the Sheep of the Masked Singer speaks of himself as a person who would never give himself a sheep, instead in this moment of fragility he feels like a lost sheep in a world of predators. The purpose of the mask in the program is to dampen the extreme seriousness that distinguishes it and that leads her to take life in front of her, to leave room for the lightness that has always been her desire.

The Giraffe from Il Cantante Mascherato is Katia Ricciarelli.

As the presenter Milly Carlucci stated, it is particular because she has defined a style of her own by choosing the style. He added that she is “noble, because she is a queen”. Who will be the Giraffe? Definitely a woman, who has a circus family and who was in the world of entertainment since she was a child. In describing herself the Giraffe from The Masked Singer she confesses that she has always been consistent with herself for better or worse and that she has not changed growing up and in fact what her nature was as a child is confirmed even now. Love has always been very important to her: she made a mistake because she wanted to make a mistake and has always been in love with this wonderful feeling. She loves to dress in a particular way. 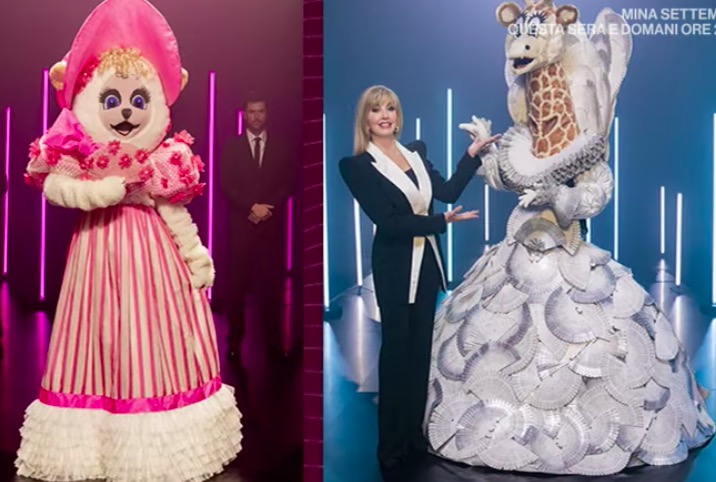 The tiger of the masked singer is Platinette, the stage name of Mauro Coruzzi.

It’s a mask of a singer strong but lonely. It is a woman and Milly Carlucci has declared that she is a strong person but also lonely by choice, spiritual and full of determination. The tiger mask speaks for itself by saying that it is not as strong as everyone thinks. Because this strength given by being the most ferocious predator actually hides a lot of loneliness. The mask is one person by choice. Who could be the Blue Tiger of the Masked Singer?

The Wolf from The Masked Singer is Max Giusti.

In the past the assumptions have been Nick Luciani the lead singer of the group Cousins ​​of Campagna, Gigi D’alessio (thesis supported by Insinna and Patty Pravo), Riccardo Fogli (thesis supported by Francesco Facchinetti and Caterina Balivo). The description of the singer who hides behind the mask is a warning not to be deceived by appearances: the wolf is not only the evil one found in fairy tales but also the tenacious animal, which has a sense of group and loyalty. The mask of the Wolf from Il Cantane masked also loves to have fun and be in company in fact it is not enough alone and defines himself the alpha wolf. The need to share his soul accompanied him from an early age: he is a male singer who therefore seems to be very sensitive and who invites us to free ourselves from the preconceptions of the wolf to understand his true nature! Try to guess in the comments who it is! 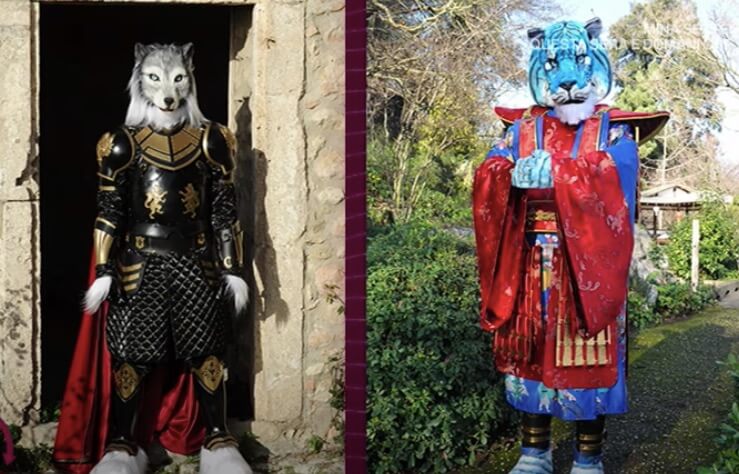 The mask of the Bear is Simone Montedoro.

Sweet and irreverent at the same time and it could be Francesco Motta or Valentino Rossi for the strong Emilian accent shown during the first episode. The bear said he lost Carolina, the girl who adopted him. Here is his description: The bear is called Teddy and he claims to be Carolina’s bear. Who is Carolina? The bear says he can’t stand injustice and is honest and brave. Furthermore, he does not like abandonment: he has never abandoned anyone! Who could it be? The only singer who has to do with a certain Carolina (if we want to take this name literally) is Motta, husband of Carolina Crescentini.

There parrot mask he is a male singer who loves to be iridescent, impossible to be locked up in a cage but also elegant and passionate. It could be Morgan or Alessandro Gassman. The Parrot says of himself that he has never worn masks in his life. He loves colors very much and hates grays, and although they tried to lock him in a cage they never succeeded. The fuel of his life is surely the passion, the dreams, the projects. A character therefore always on the move e seemingly over the top who could have made his artistic training a life warning. 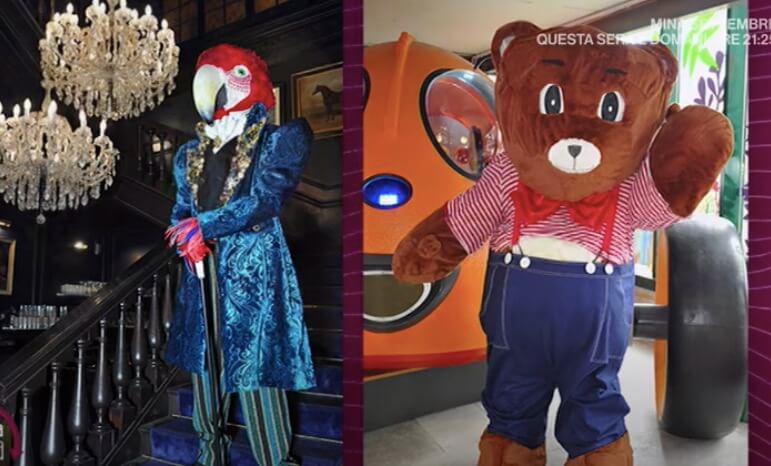 The mask of the butterfly from Il Cantante Mascherato is Mietta.

It was thought it might be Anna Tatangelo, Drusian (former lead singer of Jalisse) Sabrina Salerno or Silvia Midnight . As Milly said also a woman who knows how to be sexy. From the description we speak of a very beautiful woman who she feels like a butterfly because she is attracted to the light and never stops. The butterfly’s ability to change is also in the strings of the masked singer who wears this mask: transformation and evolution have been a priority in his life. In fact, the butterfly was first a caterpillar then a chrysalis and today finally a butterfly. It also appears that the butterfly intimidates people with its beauty and adds to be careful as it is much more down to earth than one might think on the surface. What idea have you got?

The cat it’s a mask of a masked singer is Sergio Assisi.

It has as characteristics to be free, Gascon, smart and charming. The cat is a male singer who describes himself as lonely, free and independent. The cat that most resembles the Mask of the Masked Singer Cat is certainly that of the Wild Cat who has to fight to be able to live. He also says that beneath the mask is the wounded and disappointed heart. But disappointed with what? Could the cat be a well-known singer on the Italian scene? Have you got any ideas? 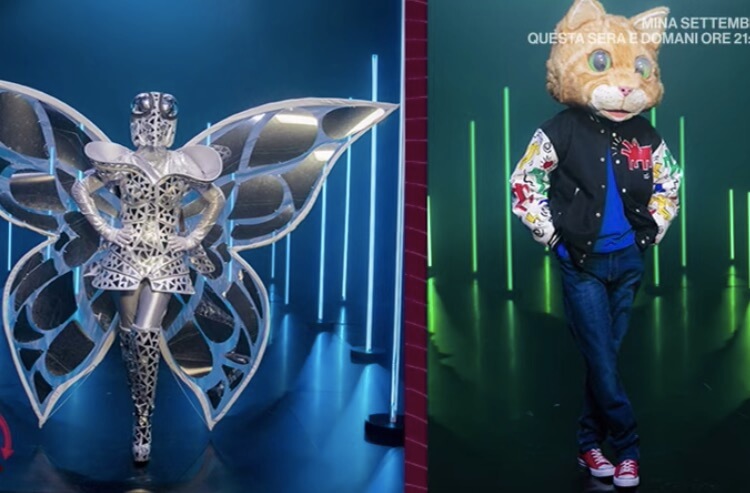 The baby Alien they are the rich and the poor …. all the rich and poor !! They came out of the mask in 4. An experiment never seen before, 4 in one. It also returns in the second episode and this time behind the mask we find Gigi and Ross. The hypotheses were Gabriele Cirilli, Beppe Fiorello, Enrico Papi or Platinette. be an imitator or even be two people in the mask.

Who are the masks of The Masked Singer?

Who is Baby Alien?

The baby alien of Il Cantante Mascherato were the Rich and the Poor first and Gigi and Ross then.

the parrot of The Masked Singer is Red Canzian.

Who is Blue Tiger?

The blue tiger of The Masked singer is Platinette alias Mauro Coruzzi.

The butterfly of The Masked Singer is Mietta

The cat of The Masked Singer is Sergio Assisi.

The wolf of The Masked singer is Max Giusti

Who is Teddy Bear?

The bear from The Masked singer is Simone Montedoro.

La giraffe from The Masked Singer is Katia Ricciarelli.

The jurors who make up the jury are 5 and they are the ones who will have to judge, as happens in Dancing with the Stars, the performances of the singers. Compared to the last edition, judge Mariotto has not been confirmed. Here are the judges of the Masked Singer 2021:

The masked singer starts Friday 29 January e will go on for 8 episodes.