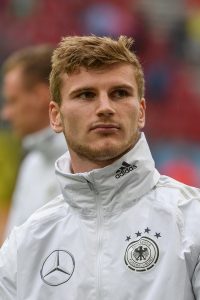 How much money does Timo Werner earn?

Timo Werner was born on March 6, 1996 in Stuttgart. The Swabian is now one of the best German strikers. After a few years at RB Leipzig, the center forward moved to Chelsea FC in July 2020, where he earns an annual salary of 16 million euros. In addition to his club career in the Premier League, Werner laced his football boots for the German national team and is one of the favorites of national coach Jogi Löw. The cherished Timo Werner’s assets are 16 million euros.

Timo Werner’s great career began early at VfB Stuttgart. Already in the F-youth the striker moved to the youth department of the Cannstatter. At the latest in the A-youth it was clear that he can become a great football star. Despite being eligible to play for the B-Youth, Werner already played for the A-Youth and was the top scorer in the 2012/2013 season – a big exclamation point. In the coming year he was allowed to train with the professionals.

In 2013 there was the debut in a competitive game at the age of 17 years and four months. On his 18th birthday Werner was allowed to sign his first professional contract with VfB Stuttgart. However, the striker did not meet this requirement. After his VfB was relegated to the Bundesliga in 2016, the Swabian sought his luck at the only East German Bundesliga club: RB Leipzig (club of Red Bull boss Didi Mateschitz). There Werner advanced to become a regular player and goalscorer in his debut season: 21 goals and seven assists meant 4th place in the goalscorer list. When best German goalscorer the breakthrough was completely successful.

In the national team, Timo Werner looks back on a successful time with the U-teams. The award of the Fritz Walter Medal in gold as the best German player in the U17 age group testifies to one thing extraordinary playful talent and ability. After making his U15 debut in 2010, Werner went through all age groups until he made his senior national team debut in 2017 against England. The Leipzig striker was the top scorer at the 2017 CONFED Cup.

The move to Chelsea FC

In the last two seasons, hardly any other player dominated the transfer carousel like Timo Werner. Numerous clubs were considered interested on top German talent. In particular, a move to the German record champions FC Bayern Munich was temporarily pushed by the media and the player himself. In the meantime, Timo Werner extended his contract with RB Leipzig until 2023, because those responsible did not want to let him go free of charge. The exit clause integrated in the contract made a change likely soon.

In summer 2020 the time had come – Timo Werner left RB Leipzig and switched to the English Premier League for Chelsea FC (owner: Roman Abramowitsch). According to the information, Chelsea pulled the release clause and paid 53 million euros for it. With more than six million euros, his training association VfB Stuttgart receives a nice thank you. According to media reports Chelsea FC London paid the German star striker a hand money of eleven million eurosto convince him to move to the English capital.

With his new contract with Chelsea FC, Timo Werner will become one of the highest-paid German footballers. After his earnings in the first few years at RB Leipzig were around 2.5 million euros annually, there was a substantial salary increase to 8 million euros per year when the contract was extended in 2019. According to estimates, it is even slightly more than double that at Chelsea FC London. The Annual salary should be 16 million euros without bonus payments. With this he will increase his fortune considerably in the next few years.