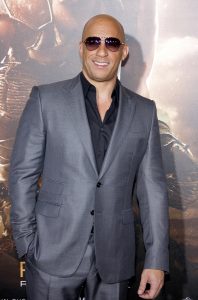 How rich is Vin Diesel?

Vin Diesel, who is actually called Mark Sinclair Vincent in real life, was not only able to make a name for himself as a great Hollywood actor, but also benefited financially from his numerous film successes. The bald head of character Vin Diesel has a Assets of 186 million euros. Of course, his income depends on what kind of project the American is currently involved in. In 2014, his income is said to have been the equivalent of a good 23.75 million euros. In 2015 this number rose to 44.65 million euros. In 2015, Vin Diesel was therefore one of the 20 highest-paid actors of the year according to the Huffington Post. The “Fast and Furious” film series in particular has poured a fortune into Vin Diesel’s coffers. In 2016, Vin Diesel had an income of 33 million euros, according to Forbes.

The wages of millions that the film hero now earns are incidentally no comparison with the money that Vin Diesel’s first complete film production cost. The first film in which Vin Diesel was not only seen, but also written and produced himself, was “Multi-Facial“. At the time, Vin was just 26 years old and the film, which was shot in three days and shown at the Cannes Film Festival a year later, cost him only 2,850 euros.

The budget for his second film was much larger. Vin Diesel was able to collect 47,500 euros from investors for this project. And it was his Call center experiences Certainly a great help to convince the investors of his idea for the film “Strays”. But Vin Diesel doesn’t just know how to deal with money. Rather, he knows how to skillfully steer his popularity in the right direction. It is not for nothing that the American is the actor with the second most fans on Facebook after Will Smith.

Vin Diesel and The Fast & The Furious

We’re talking about one of the most successful series of films of all time. It ranks 7th in the most successful film series of all time. The Fast & The Furious means translated the fast and the wild. An action film where there is plenty of space for cars and related tuning as well as street races. The first part appeared in 2001 (Vin Diesel’s fee: $ 2 million), there are now eight parts of the series and one spin-off. Vin Diesel’s friend & co-star Paul Walker was killed in a car accident in November 2013. The duo Vin and Paul took the hearts of the fans by storm, which is why the tragic accident hurt all the more.

Fast & Furious 7 also covered the death of Paul Walker. An emotional film with moving moments that also makes you think. The seventh part of the film series was within a short time the financially most successful part of the series and one of the most successful cinema films worldwide. The gross profit was $ 1.5 billion. The film series has already grossed billions. The Rock has been an integral part of the series since Fast 5 and it is impossible to imagine life without it.

Another part (out of order) came in 2019 with “Hobbs & Shaw”. Fast & Furious 9 has been postponed several times and should finally hit theaters in 2021.

Vin Diesel’s life is full of exciting anecdotes. For example, the American has one Twin brother named Paulwhich, however, does not like to be in public. Incidentally, Mark Sinclair Vincent does not know his birth father. However, we know from his mother that she is of British, Scottish and German descent. The American was raised by his mother and his African-American stepfather. The actor with the impressive stage name came into contact with different cultures at an early age. Vin Diesel first appeared on stage at the age of seven. Even more exciting, however, are the circumstances in which Vin was able to land his first acting role at a young age.

At that time, Vin, his brother and some of their friends broke into the theater to let off steam and cause unrest. However, they were caught doing this. Instead of calling the police about the vandalism, the theater director offered the boys a role in his play. Only life writes such stories. The rough voice has been one of the actor’s trademarks since the age of 15. Following his broken voice, as a teenager, at least on the phone, Vin was valued as much older for the next few years, from which he repeatedly benefited. Incidentally, the Hollywood star took on the nickname and later stage name “Vin Diesel” at the age of 17. At that time he was working as a bouncer in a club in New York.

The actor in private

Even if Vin Diesel was able to benefit from his film successes mainly in financial terms, he prefers to keep his private life a secret. With the mother of his three children – Paloma Jiménezwhom he met while filming, the star is not married. His career as a director and screenwriter was short-lived with only two films. As a producer, however, Vin Diesel was able to participate in eleven projects up to 2017 alone. Most of the time he was seen as an actor. Hollywood takes Vin Diesel’s talents seriously!