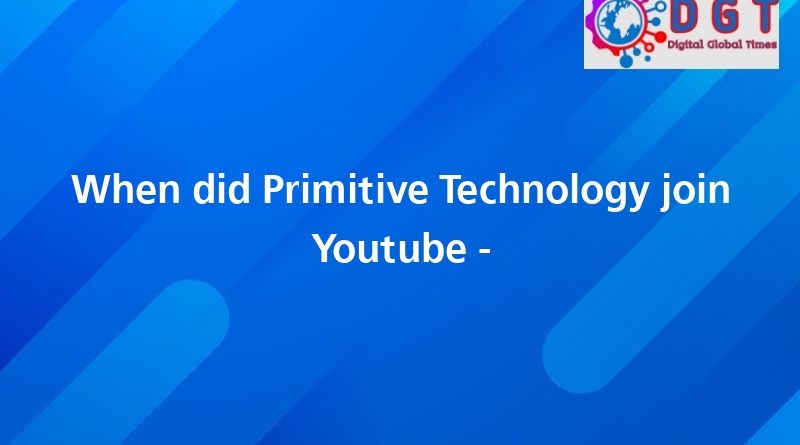 YouTubers have strongly influenced society nowadays. Now and then they come up with new and creative ideas that instantly catch the attention of the viewers, thus being a major reason for their fame.

If your interest lies in constructing pools or a house consisting of all the natural resources as raw materials and you watch related videos on Youtube, it is a possibility that you might have stumbled across a famous channel- Primitive Technology.

The channel is managed by a man named John Plant. He has developed a hobby of building materials from scratch. Many people question the net worth of the Primitive technology guy and where he is now. Continue to scroll to read more about him.

What is Primitive Technology?

Primitive Technology is a famous YouTube channel managed by a guy named John Plant. He creates videos regarding building a house, a pool, a brick kiln, etc using materials found in the wild surroundings. What makes him different from some other well-known Youtubers is the fact that he has gained immense popularity in a comparatively shorter period.

Primitive Technology was created in 2015. In 7 years the channel has reached 10.6 million subscribers. Although John Plant has uploaded only 57 videos, that is solely because he wishes to give a touch of perfection to all the videos that he uploads. John Plant describes doing this work as a hobby. However, he resides in a modernly built house and eats modern food.

When did Primitive Technology join YouTube? Where is he now?

John Plant began showcasing his hobby via the medium of “Primitive Technology” in 2015. John Plant firstly created his Primitive  Technology blog on WordPress.

By the time of November 2018, the Primitive Technology guy uploaded most of his videos on his blog. It was then when John Plant posted his “Iron Prills” video on Youtube and he has seen a gradual increase in his fame and liking by the audience worldwide since then.

At present, John Plant is in Queensland, Australia. After 13 December 2019, no videos were being uploaded to his channel in the expected timeframe. However, on May 28, 2020, there was a post from Reddit that mentioned that John Plant was doing well and where he had been posted.

The post explained that the Primitive Technology guy had taken a break from Youtube as he was busy working on a project for cable networks. Finally, on March 2nd, 2022, John Plant uploaded a video and since then he has been regular in his posting.

John Plant, Primitive Technology guy net worth ranges around $ 1.8 million. His YouTube channel has more than 10.5 million subscribers when this article is being written. Not only this, the creativity of this guy has resulted in continuously increasing his subscribers each day. Nearly 5,000 to 10,000 subscribers are added to his channel per day.

Since the day he stepped onto Youtube, his videos have got more than 900 million views. Several people watch his videos daily. As per an estimate, the Primitive Technology guy, John Plant gets 350,000 views each day. The views come from different sources and contribute to increasing the net worth of the Youtuber.

John Plant is known to earn an income of $1750 every day from ads. This accounts for a total of $640,000 a year. Moreover, Youtubers are given $2 to $7 for every 1000 monetized views. This is the amount that is left once Youtube cuts its share. Of the total number of views on the video, the monetized views are 40 percent to 80 percent.

Factors such as the location of the viewer, the device on which the video is played, the number of ads in a video, the ad inventory, ad engagement, type of advertisement, the number of people who skip the ad, the type of content have a direct impact on the monetized views. Now, it is the advertisers that decide the cost of an ad view. The minimum that they have to bid is $0.01 per view.

All in all, John Plant earns a net worth of $1.8 million. He has also authored a book “Primitive Technology: A survivalist’s guide to building tools, shelters, and more in the wild”. It is a 192 pages book published by Clarkson Potter in 2019. The Primitive Technology guy lives with his family and leads a modern life although his videos say the opposite.

Primitive Technology has grown and enhanced as a YouTube channel since 2015. Now the channel has reached 10.6 million subscribers which is a great milestone achieved in just a time period of 7 years. John Plant makes houses from scratch. The land he does this on is his own. Apart from that, he lives a settled and modern life.