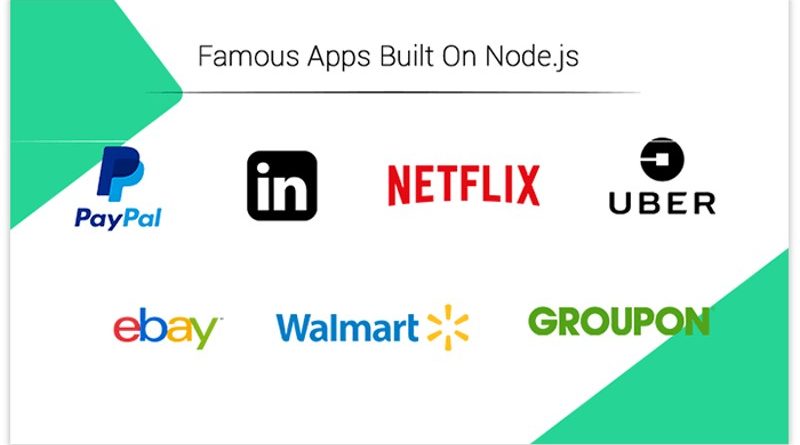 Node.js is a JavaScript-based, open-source, cross-platform runtime environment. It was developed for quickly scaling network applications. Since its release, Node.js has been a genuine gift for industry giants like Uber and Netflix because of all the advantages it offers:

Let’s move on to the list of the largest businesses that use node.js development in production.

Netflix is the world’s leading supplier of streaming media and video-on-demand content, such as movies and television shows. More than 190 nations have access to the program. In 2013, Netflix expanded into film and television production, internet distribution, and original content development. Netflix has over 109 million streaming customers globally in the third quarter of 2017.

Netflix had a solid and full-featured program, and they wanted to make it modular and lightweight, decrease complexity, and especially power user interfaces while using their current infrastructure. As a result, they chose to migrate the whole user interface to Node.js. Because the Node.js runtime has proven to be so efficient, the Netflix team is migrating data access layers to it.

One of the biggest online markets, eBay provides services for both business-to-business and consumer-to-consumer internet transactions. It runs in 37 countries and has 183 million active users.

The giant’s major issues were scalability and heavy traffic. After lengthy internal discussions, the Node.js solution was eventually selected by eBay developers to address these technological issues.

Although many see LinkedIn as antiquated and out of date, it is still the most widely used business-focused social network and a useful tool for finding successful jobs. There are 467 million LinkedIn members worldwide. Microsoft purchased LinkedIn for $26 billion in 2016.

To avoid having users make several requests for a single page, LinkedIn opted to switch from their synchronous Ruby on Rails mobile app to an asynchronous event system. They chose Node.js as a result because of its scalability and performance effectiveness. And Node.js met their requirements.

One of the most widely used project management tools for Agile teams right now is Trello. It is attracting organizations from a broad range of sectors as well as individuals due to its user-friendly interface and real-time task management adjustments. Trello’s primary technology has been Node.js from the beginning. Node.js was chosen by the team initially to prototype a single-page application due to its quick development time and code reuse.

Global transportation firm Uber has its main office in San Francisco, California. The firm, which works over 6 continents, 68 nations, and 633 cities, doubles in size every six months. Uber has grown to be one of the most well-known substitutes for a regular cab since its introduction in 2012. As a result, Uber needs a platform that will always be available.

Their software links driver-partners with passengers, thus it must analyze a massive quantity of data at a scale that is rapidly expanding. Due to its ability to keep up with the speed of Uber’s enormous business demands and improved data processing capabilities, Node.js was chosen by Uber to create its vast matching system.

One of the most popular and reliable systems for receiving, transmitting, and accepting payments is PayPal. The software enables users to communicate electronically without disclosing their debit or credit card information. More than 200 million PayPal accounts are active as of November 2017.

It’s interesting to note that Paypal did not start off using Node.js as its preferred technology. The first issue was the divided teams: those who independently develop for a browser (using HTML, CSS, and JavaScript), and those who code for server applications (using Java). Therefore, the main barrier was the line between the browser and the server

Their technical specializations were combined into one team by using JavaScript to write both browser and server apps.

Since Node.js’ original release in 2009, this ecosystem has unquestionably carved out a position for itself in the business world. The fact that industry titans are using it for their websites and apps shows that the excitement around Node.js is not unfounded. Additionally, more businesses are entering the league to provide top-notch goods. Now, Node.js is undoubtedly the winner of the marathon.