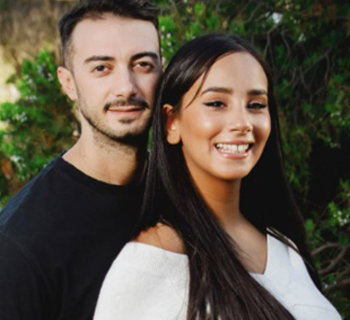 Nadia and Antonio, he was born Antonio Giungo, I am one of the couples who participates in Temptation Island 8 from September 2020. Nadia and Antonio are in crisis because the age difference and the different lifestyle raise questions about the real future of the relationship between the two.

Who are Nadia and Antonio?

Nadia and Antonio I have been engaged for almost 2 years: 1 year and 9 months to be exact. Antonio Giungo is a 32-year-old boy who is particularly active in the event organization sector: starting from the province (he was in charge of the events at the former Vr33 club in Reggio Emilia in 2014-2015) he made his way and currently works for Great Events company. He often goes to Ibiza, so it is easy to imagine that he may have interests to look after there too, inherent to his work.

Nadia has decided to take a gap year having 22 years after her studies to understand where to direct her life, meanwhile the users have noticed her evident resemblance to Paola di Benedetto, the girl could be a student given her young age. He confessed to having lived the mourning of the death of his brother. Antonio complains about the long time spent doing nothing that Nadia spends on the sofa: this suggests that she does not have a job or that in any case she has a different lifestyle from that of her partner who defines himself “with his head on his shoulders” .

Nadia and Antonio have 10 years of difference: Antonio is older than Nadia and also seems to have a more “square” lifestyle. This is precisely the reason why, despite the fairly long relationship, it is the boy who decides to call the editorial staff to participate in Temptation Island 8 of September 2020 conducted by Alessia Marcuzzi. The girl, for her part, does not want to change and make the perfect “wife” that her boyfriend would like by his side.

Why do Antonio Giungo and Nadia participate in Temptation Island?

“Even if I love her I have to understand if she is the right person to build a future. I’m with my head on my shoulders, but she stays on the sofa all day doing nothing. ” These are the words of Antonio Giungo in the presentation video released to the Temptation Island editorial staff where he explains the reasons that led him to call the program. In fact, Antonio is now a man who thinks about planning his future with the right person. In this sense, the different lifestyle that the couple leads could have raised doubts in Antonio.

Nadia, for her part, speaks of Antonio that she would have liked a woman next to you to wash, iron and do housework. Nadia claims that she is absolutely not this type of person. She adds that neither Antonio nor others will be able to change her because she is like that.

A month later, the couple confirms the choice to stay together and that the program has helped them find peace of mind.

Nadia shows up at the bonfire even though Stefano advised her not to go. Nadia confesses that she was fine with Stefano but that there is no type of attraction, also pursued by Alessia. Nadia then admits that she has thought and understood Antonio better and his too light behavior in relation. The two clear up, Antonio withdrew into himself and Nadia too and this created a wall. They both understood it and it is the prerequisite for moving forward and the couple walks out of Temptation Island together with a promise to solve their problems.

Antonio and Nadia are one of eight couples who participate in Temptation Island 8 2020: together with them there are: Francesca and Salvo, Serena and Davide, Sofia and Amedeo, Speranza and Alberto, Anna and Gennaro, Carlotta and Nello. Temptation Island 8 starts September 9 on Channel 5 in prime time.

Home » Reality show ” Who are Nadia and Antonio: Biography, Age, Bonfire and One Month After Temptation Island