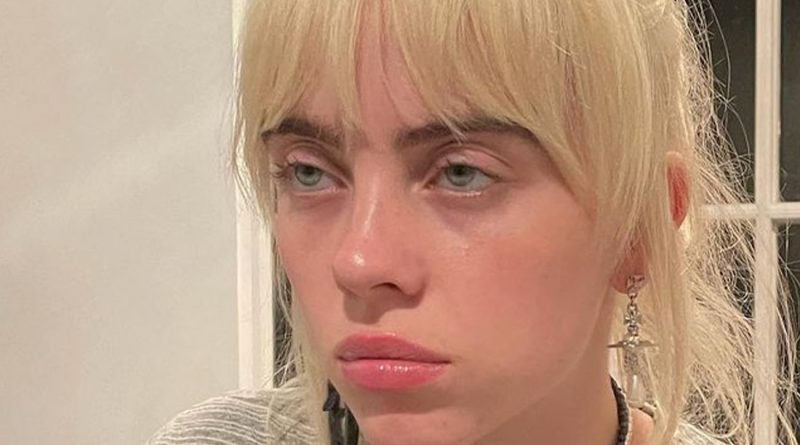 Billie Eilish, stage name of Billie Eilish Pirate Barid O’Connell, is a 19-year-old American singer-songwriter, famous all over the world. Winner of 6 Grammy Awards, Billie Eilish is the youngest songwriter to ever win such awards, including Best Album, Best Song and Best New Artist. From eccentric and very personal look, Billie Eilish is one of the most promising and celebrated songwriters in the world.

Who is it Billie Eilish?

Billie Eilish, pseudonym of Billie Eilish Pirate Barid O’Connell, was born on December 18, 2001 in Los Angeles. Little Billie, of Irish and Scottish descent, grows up in a family engaged in the artistic field. Billie grows up in the Highland Park neighborhood of Los Angeles, receives home schooling, and already from the age of 6 he performs in various talent show, then joining in 2009 (at age 8) the Los Angeles Children’s Chorus. Thanks to her mother, who teaches both Billie and her brother Finneas the basics of writing music lyrics, Billie at the age of 11 he starts singing songs written by her. Success comes like a wave in 2016, when her debut single comes out Ocean Eyes. From this point on, Billie’s career will be increasingly on the rise. Give the audience songs such as: Party Favor, Lovely, You Should See Me in a Crown and the very famous When the Party’s Over. With a very personal look and style, Billie releases her second album in 2021 Happier Than Ever, And Vogue dedicates the cover of May to her, where we see a new Billie: blonde and in a modern pin-up version.

Origin of the name

It is said that before Billie Eilish was born, her parents had already decided to call her Eilish (first name). During gestation, however, Maggie Baird loses her grandfather Bill, an event that prompts the singer-songwriter’s parents to call her Billie, with the middle name Eilish. The third name Pirate, was chosen instead by his older brother Finneas. The singer-songwriter said she doesn’t particularly love her first name Billie, saying:

Sounds like a goat name adapted for a human

Already at the age of 11 Billie Eilish composes and sings her songs. Initially she also tries to support some acting auditions, but not being interested in this artistic field, she gives up to devote herself exclusively to music.

At 11, Billie Eilish wrote her first piece: Fingers Crossed, which is published on SoundCloud (Swedish music platform). It is 2012 and even if the first supporters of Billie like the single, the singer-songwriter eliminates it from the platform, because in her opinion it is ugly. In 2015 he writes Ocean Eyes, which is published in 2016 also on SoundCloud, and which launches the young Billie as a new musical phenomenon. Given the rapid notoriety achieved by the young woman, Billie releases other successful singles:

All of these hit songs converge on Billie’s debut EP: Don’t Smile at Me.

Billie Eilish’s career is on the rise, and the singer-songwriter collects one hit after another. From 2018 he publishes the successes:

It’s 2019 and Billie Eilish wins 3 statuettes at the MTV Video Music Awards, and still releases hit singles such as Everything I Wanted. Wins Best Artist of the Year and Best Alternative Artist award at the 2019 American Music Awards, and it is woman of the year for Billboard. Billie’s talent and fame do not go unnoticed and in 2020 she reaches the peak of her success: she is the youngest artist ever, and the first woman, to win the most coveted prizes at Grammy Awards 2020: 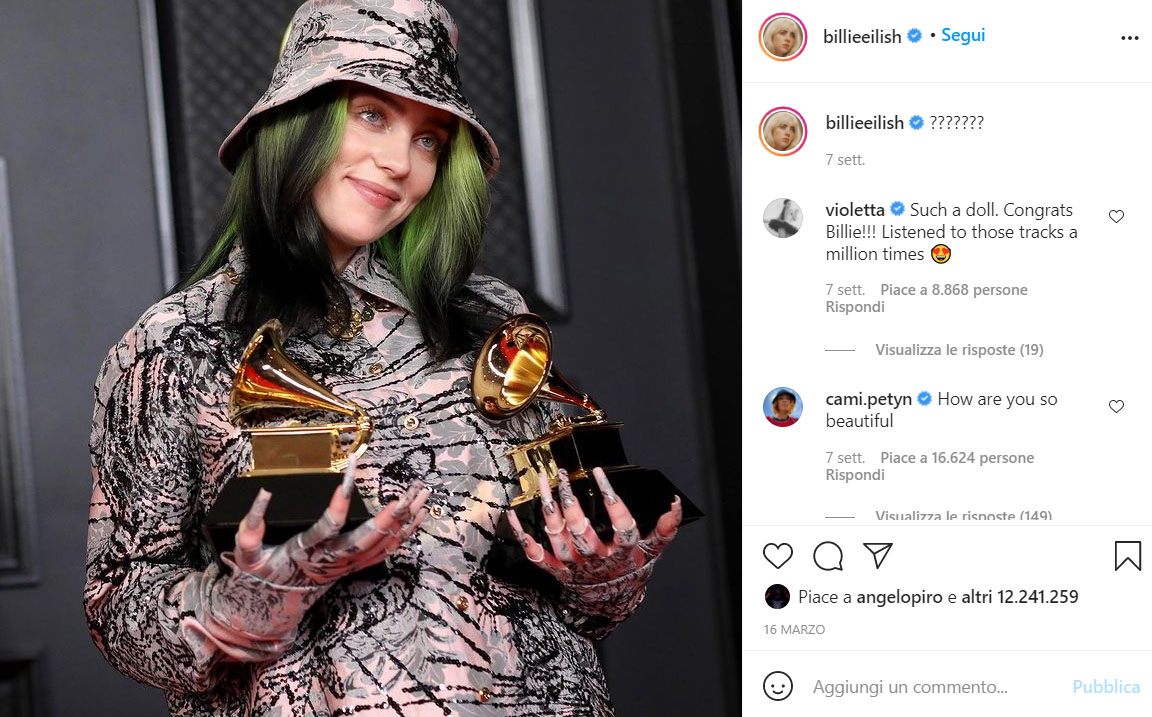 It’s 2020 and Billie Eilish is chosen to play the film’s soundtrack No Time to Die (from the 007 saga), along with other singles:

The songs converge on his latest album: Happier Than Ever.

Billie Eilish, who achieves success at just 16, has 4 tours to her credit:

I am very different from many people and I try to be. I don’t like following the rules and fashion at all … I always wore what I wanted and always said what I wanted to say

The young singer-songwriter is known to use predominantly very loose clothing, and there is a precise reason, which she herself explains:

I wear baggy clothes so no one can have an opinion on how I am because they can’t see what’s underneath … She’s fat, she’s thin, she’s got a big ass … no one can tell, because no one knows

Another distinctive feature of Billie Eilish is her hair, which often keeps dyed in two different colors (green-black, blond-black, blue-black) or even just gray, or aqua green. Inevitable are the long nails often styled according to the clothes worn. The cover of the May issue of Vogue stars Billie Eilish with a brand new look: the award-winning singer-songwriter has in fact dyed her hair blonde and for the first time she has shown herself with a completely new outfit. No sweatshirts and big t-shirts, but a modern pin up look. 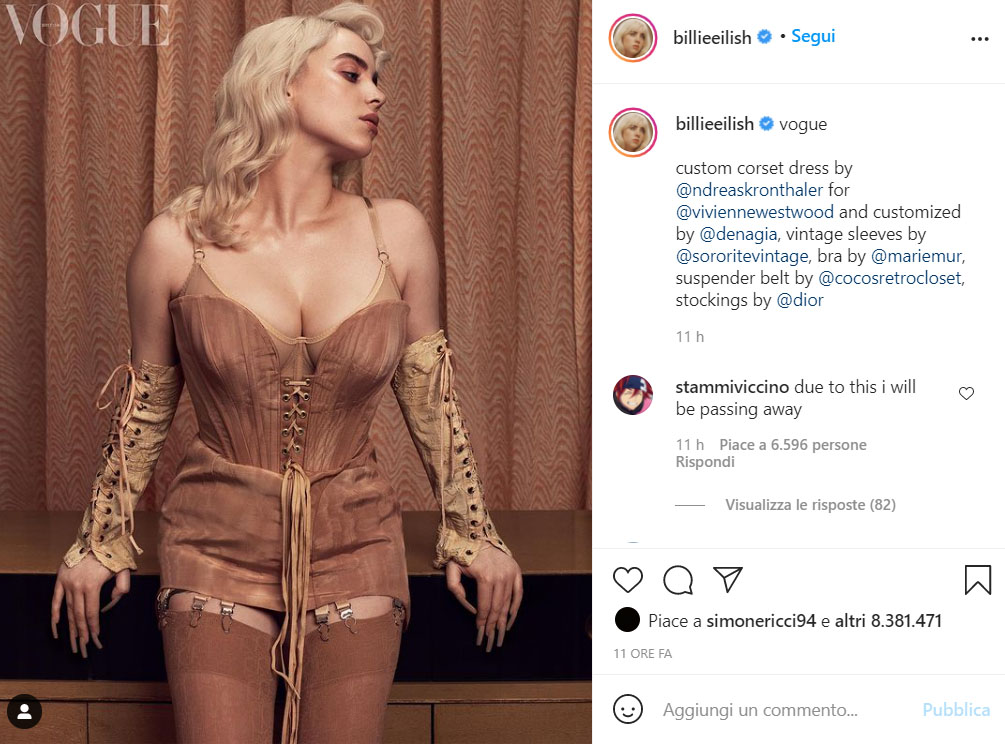 Beloved not only by young people, Billie Eilish on Instagram, boasts a following of almost 40 million followers. Works, collaborations, photo shoots, thoughts and quotes dot the social profile of one of the most famous and loved artists of the moment. With one of the most followed profiles of the moment, one wonders if even on Tik Tok, Billie Eilish, manages to break new records (for example by removing the throne from the queen of Tik Tok Charlie D’Amelio). 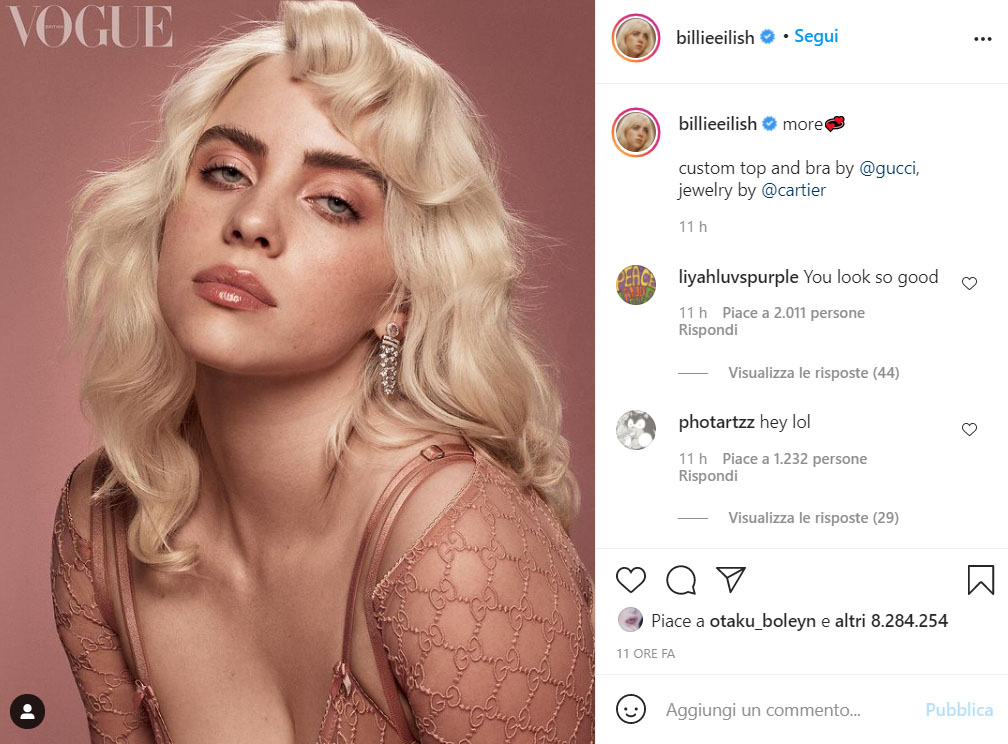 Billie is the daughter of artistic parents. His mother, Maggie Baird, is a teacher, actress and theater and music screenwriter; his father, Patrick O’Connell, is a construction worker with a passion for acting and music: he plays the piano and ukulele, and acts in various films including Iron ManBillie Eilish she has always been encouraged by these to pursue her artistic dreams. It was conceived with in vitro fertilization, given the couple’s difficulties in conceiving after the birth of their first child Finneas, who is 4 years older; the latter is active in the musical field: he plays the piano, guitar, bass, sings and has a band called The Slinghtlys, as well as being a record producer and an actor.

In 2021 a documentary on the life and rise of Billie Eilish is released: Billie Eilish: The World’s a Little Burry. Thanks to it we discover that the young singer-songwriter was engaged to 24-year-old rapper Brandon Quention Adams, which performs under the stage name of 7: AMP. Billie appears on the cover of the boy’s debut album, Bleaupro (2019). The relationship ends because, as stated by Eilish herself:

I wasn’t happy, I didn’t want the same things he wanted and I thought it wasn’t right for him

Billie was recently spotted with actor Matthew Tyler Vorce, together as they walked the singer’s dog for a walk. No denial or confirmation on a hypothetical relationship.

After some suspicions, due to the release of a video on the web in which Billie Eilish manifests nervous tics, in 2018 the artist herself claims to be affected since childhood by tourette and synaesthesia syndrome (disturbance affecting sensory perception). In 2018 one of her closest friends, rapper XXXTentacion, is killed and for most of the year, despite constant success, Billie struggles with anxiety and depression.

Several causes are dear to Billie, first of all the environmental cause. Added to this is the support for the struggle for the animal rights, for the right to vote. For this latter cause she also performed during the 2020 Democratic National Convention, openly supporting the current US president, Joe Biden.

Billie Eilish has only one tattoo and well hidden too. The writing was tattooed in May 2019 jonboy, on the sole of the left foot. 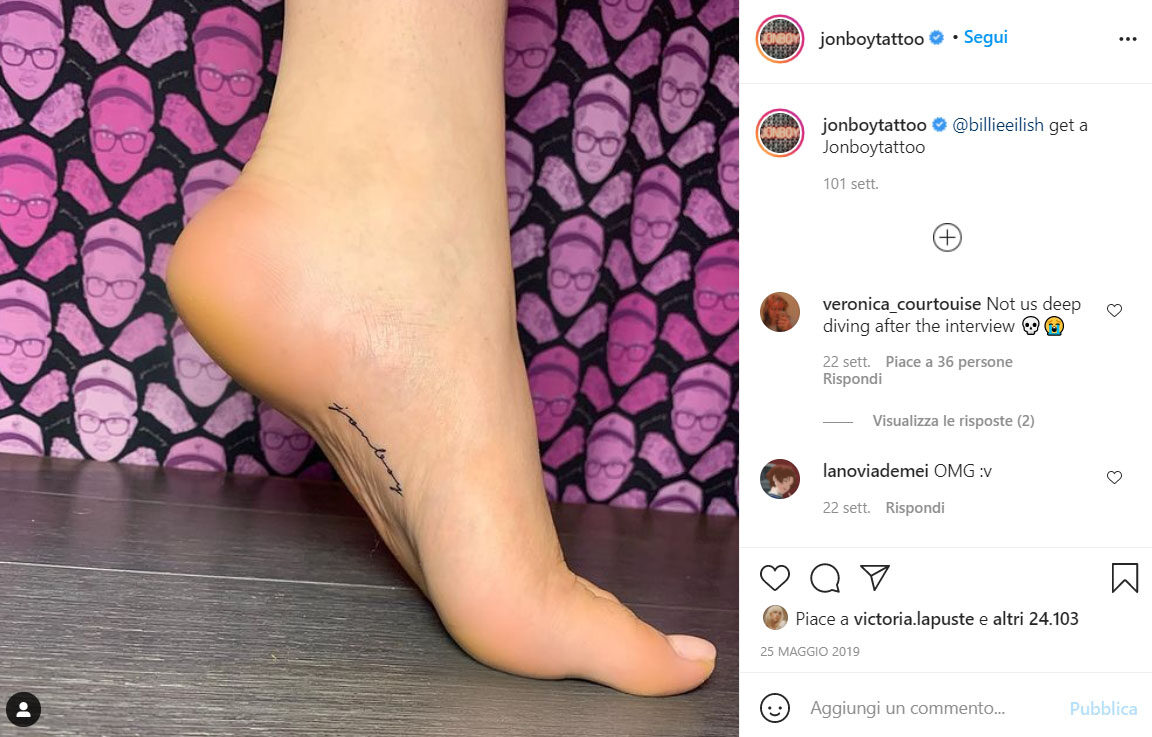