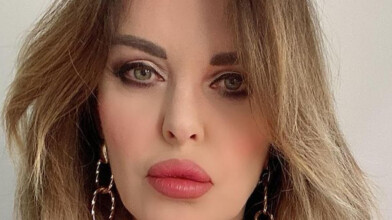 Alba Parietti is a famous 60 year old showgirl born in Turin. Active in the artistic field since the Eighties, her long career has seen her range in various sectors: from conducting various television programs, to the participation in cinema films, to the most recent activity of columnist in the Mediaset and Rai salons. Mother of the well-known sports journalist and former gieffino, Francesco Oppini, Alba Parietti participated in Such and what Show 2021, conducted by Carlo Conti.

Who is it Alba Parietti?

Alba Parietti, was born as Alba Antonella Parietti, on 2 July 1961 in Turin. Raised in the district of Madonna del Pilone in Turin, Alba is the daughter of the painter and writer Grazia Dipietromaria and of the partisan and chemist Francesco Parietti. Alba graduated from the artistic high school in Turin and immediately afterwards began working for local radio stations, making her debut in the theater in 1977, taking part in the work of Oscar Wilde: The importance of being Ernest. In 1980 Alba Parietti made her entrance on the small screen, at the helm of the program Gorgeous!, broadcast on Videogruppo’s local Turin television. From there his career will be divided between music, television and cinema, also passing through the publishing industry (she is the author of 3 books). A leading figure on the Italian television scene, Alba Parietti is one of the faces best known to the public. Her loves with famous people such as Ezio Bosso, Christopher Lambert, Cristiano De Andrè and Franco Oppini, with whom she gave birth to the ex gieffino Francesco Oppini, now engaged to Cristina Tomasini, are famous. Recently turned 60, Alba Parietti is preparing to participate Such and what Show 2021.

Determined, eccentric and outspoken, Alba Parietti’s career is divided between cinema, music and television. Always present, with constancy, the career of the Turin showgirl ranges from acting roles, to those of presenter and commentator, also passing from Reality show.

Alba Parietti makes her debut on television in the program Nude, dressed & transvestite of 1978, and how conductor, in 1980, of the program Gorgeous!, both in the local Turin network: Videogroup. Already in 1983 he arrived in Rai, participating in the program Galaxy 2 and in Mediaset, in 1984, alongside Gigi Sabani in Ok, the price is right! These are the years in which Alba Parietti makes herself noticed and loved by the public, taking part, in fact, in numerous television productions, such as:

These are just some of the programs in which Alba Parietti has taken part to varying degrees. In his career there are also the participations from competitor ai Reality show and as a columnist. The 2006/2007 season sees it fixed columnist a Sunday in and that of 2009/2010 as fixed columnist of the programs of Barbara D’Urso, Afternoon five And Sunday five. Since 2019, Alba Parietti has been a regular columnist for Live – It’s not D’Urso.

Alba Parietti, since the 2000s, has not denied the format of Reality show, which exploded in the first decade of the new century. In fact, he participated, both as a competitor, and as a juror or commentator, in:

She was confirmed as a competitor of the eleventh edition of Such and Which Show.

As soon as she celebrated her 60 years, Alba Parietti confirmed, during an interview with Alfonso Signorini, her presence at Such and what Show 2021, broadcast from 17 September 2021 on Rai 1. Together with her, the presence of: Ciro Priello, Stefania Orlando, Pierpaolo Pretelli, Federica Nargi, Deborah Johnson, Dennis Fantina, Francesca Alotta, Gemelli di Guidonia, Simone Montedoro and Biagio Izzo has been confirmed.

The program will see as judges: Loretta Goggi, Cristiano Malgioglio and Giorgio Panariello.

Also active in the cinema, especially between the eighties and nineties, we remember Alba Parietti in films such as:

Earlier in her career, Alba Parietti also released several singles and a studio album. The album was released in 1996, with the title Sunrise, and packs some hits like Only Music Survives And Look into My Eyes.

The loves of Alba Parietti

Alba Parietti is also famous for her love stories with faces known to the general public. We remember the most famous.

The first and important love story of Alba Parietti is without a doubt the one she had with the actor Franco Oppini. The two were married from 1981 to 1990, and in 1982 they gave birth to the son Francesco Oppini, known to most for his participation in the GfVip 5 and for being a regular commentator of the sports program Tiki Taka. After breaking up with Franco Oppini, Alba Parietti binds herself for 6 years with the philosopher Stefano Bonaga. 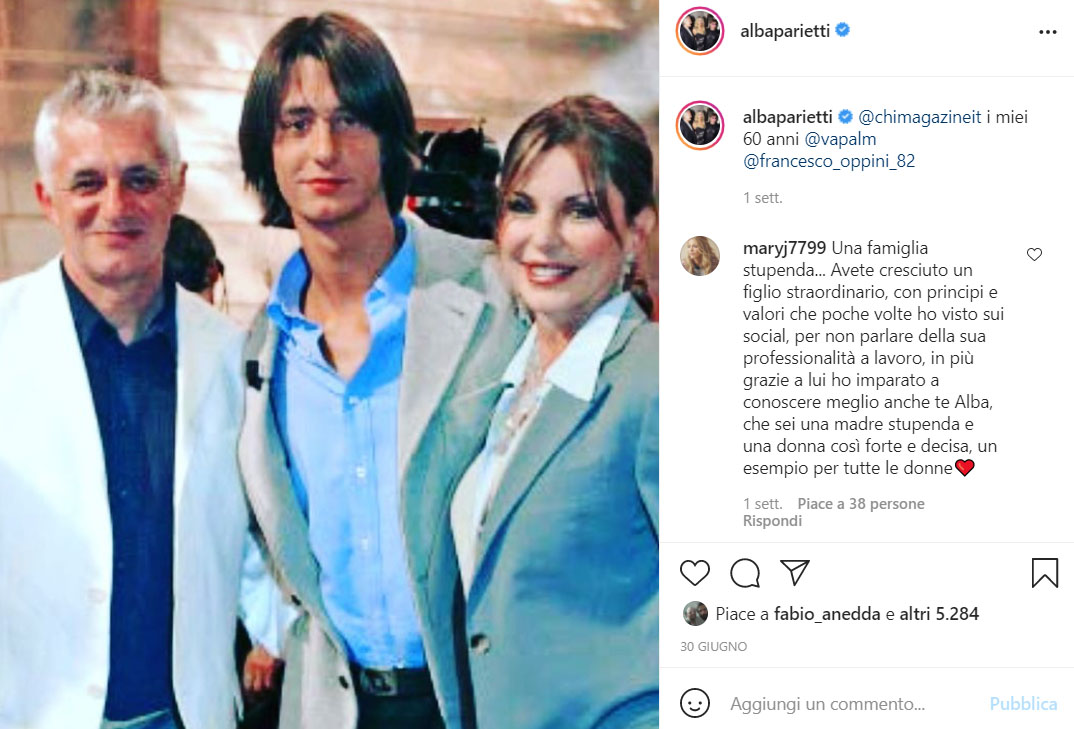 In 1996 Alba met the French actor (famous for the film Highlander – The Last Immortal) Christopher Lambert. The two remain together, through ups and downs, for about 3 years.

Alba and Christopher met again in 2019, and for a while they started dating again, only to then interrupt their relationship again.

After a brief history with the financier Jody Vender, Alba Parietti is linked to what she defined as her great love: Giuseppe Lanza Di Scalea. The story between the two lasted 6 years, described by Alba as the best from a sentimental point of view. With Giuseppe, the Turin showgirl, she also found a point of reference for her son Francesco, who is very close to him. Giuseppe Lanza Di Scalea passed away in October 2020, and Alba dedicates only loving and highly esteemed words to him.

After a year-long relationship with the record artist Maurizio Salvadori, Alba discovers in her longtime friend, Cristiano De Andrè, a new love. The two consummate their relationship over a period of 4 years (2010/14), and unlike Parietti’s other relationships, the one with De Andrè does not end in a relationship of esteem and friendship. The two, in fact, would not be on good terms.

After various rumors that they wanted them either “very friends” or “lovers” recently Alba Parietti, confirmed that she had a sentimental affair with the late musician Ezio Bosso. The columnist and showgirl described the story with Ezio Bosso as

Claiming to have suffered a lot on the emotional level for their relationship, but finally happy to have been able to live it.

Alba Parietti’s only and present love is her son Francesco Oppini. Born in 1982, Francesco is a journalist and sports commentator (currently columnist fixed to Tiki Taka). Known to the public for having participated in the Big Brother Vip 5, Francesco Oppini is currently engaged with Cristina Tomasini. The relationship between Alba and her son has been described by the latter as “Beautiful, but difficult”. The two, together, went through the joys and sorrows of life: the loss of Giuseppe Lanza Di Scalea, and that, at the age of just 25, of Francesco’s historic girlfriend, which marked both of them a lot. 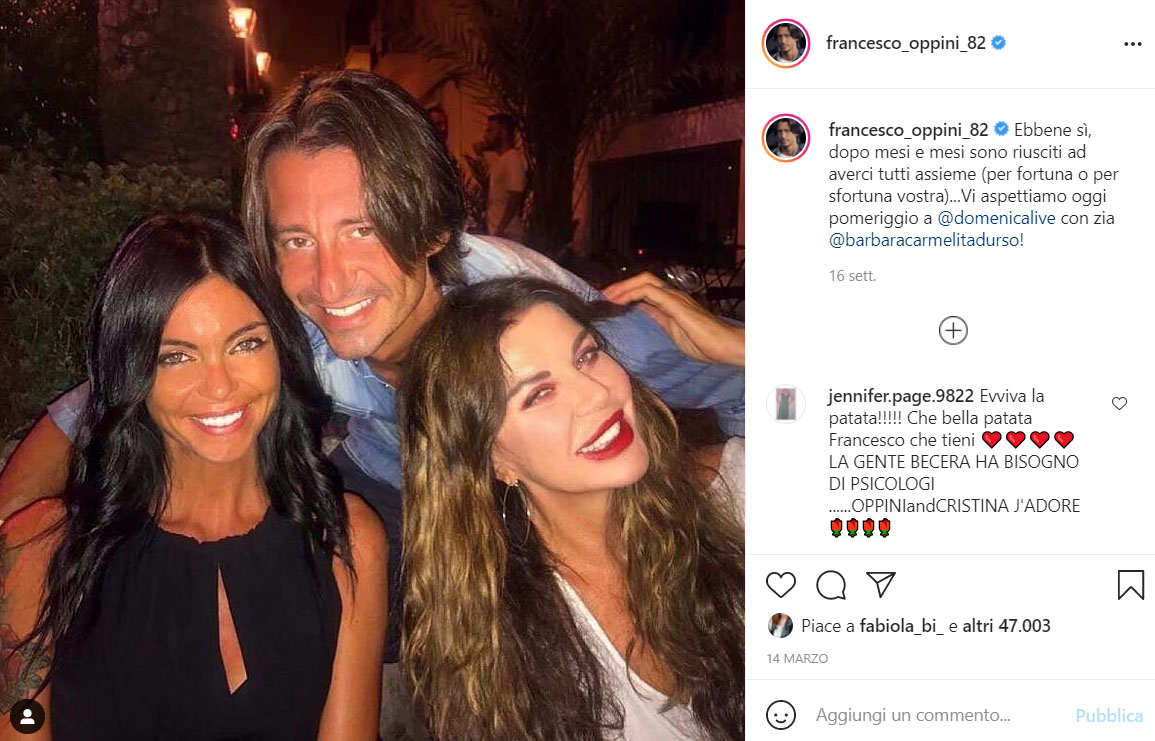 Always in step with the times, Alba Parietti, on his instagram profile, boasts 454,000 followers. With them he shares his works, daily life, holidays and much more, such as the photos of his 60th birthday.

Here is a recent interview with Alba Parietti, guest of Mara Venier a Sunday In.

Tag #Tale and Which Show