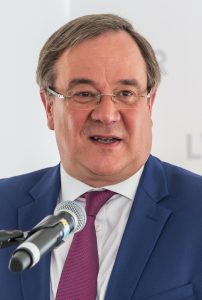 How much money does Armin Laschet have?

Armin Laschet has been federal chairman of the CDU since the beginning of 2021. Unsurprisingly, he is also going to be his party’s candidate for chancellor in the federal elections in autumn 2021. He began his political ascent in the late 1980s as a city council member in Aachen. After that he was first a member of the Bundestag, then a member of the European Parliament, finally state minister and from 2017-2021 he was Prime Minister of North Rhine-Westphalia. The cherished Armin Laschet’s assets are 1.2 million euros.

The income from Armin Laschet

When Armin Laschet joined Aachen city politics in the late 1980s, he was working full-time as a freelance journalist and as a scientific advisor. No figures are known about his income from this period. On the other hand, his official remuneration as a politician at state and federal level, with which Laschet was able to lay the foundation for his current fortune, is easy to understand.

As a member of the Bundestag from 1994 to 1998, Laschet earned around 5,500 euros gross per month as well as a monthly flat-rate allowance of around 3,000 euros. As a member of the European Parliament, which he was from 1999 to 2005, he received a gross monthly salary of around 6,000 euros. From 2005 to 2010 Laschet was state minister in North Rhine-Westphalia and as such earned around 9,500 euros gross per month. In his subsequent time as a simple member of the state parliament, he received around 9,000 euros gross per month. When Prime Minister of North Rhine-Westphalia, who he has been since mid-2017, he receives a monthly basic salary of 17,658 euros gross. In addition, there is additional income such as service expense allowances. With these salaries Armin Laschet was able to build up his fortune. Often politicians then improve their assets with various additional income, such as booked appearances and speeches at company events.

Professional career as a journalist

Armin Laschet joined the CDU in 1979 at the age of 18. Two years later he graduated from high school and then studied law and political science at the Ludwig Maximilians University in Munich and the Rheinische Friedrich-Wilhelms-Universität Bonn. In 1987 he passed the first state examination. He then worked as a volunteer at a Munich radio station and then as a freelance journalist for various radio and TV companies in Bavaria until 1994. He also became a scientific advisor to Rita Süssmuth, who was President of the Bundestag at the time.

Entry into city and state politics

Laschet began his active political career when he was elected to the city council of Aachen in 1989. In the federal election in 1994 he ran in the constituency of Aachen-Stadt and then moved into the Bundestag. Four years later, however, he was defeated by the SPD candidate Ulla Schmidt and lost his mandate again. From 1999 to 2005 Laschet was a member of the European Parliament. After Jürgen Rüttgers was elected Prime Minister of North Rhine-Westphalia in June 2005, he appointed Laschet to his cabinet as Minister for Generations, Family, Women and Integration. In 2008 Laschet was also included in the Federal board of the CDU elected. With Rüttger’s defeat in May 2010, Laschet’s term of office as state minister also ended. However, he was subsequently elected as a member of the state parliament.

Federal chairman of the CDU and candidate for chancellor

In June 2012 Armin Laschet was finally elected chairman of the CDU in North Rhine-Westphalia. In the state elections in May 2017, the CDU received a narrow majority, which ensured that Laschet was elected Prime Minister by the North Rhine-Westphalian state parliament in June 2017. In February 2020, Annegret Kramp-Karrenbauer (successor to Angela Merkel) resigned as federal chairwoman of the CDU. Laschet then applied for the post and was elected by the delegates at a party congress in January 2021. In April 2021, the Federal Executive of the CDU Armin Laschet as chancellor candidate for the federal election in September 2021. He prevailed against the Bavarian Prime Minister Markus Söder and Friedrich Merz. In the election, however, Laschet could not convince and lost with 24.1% of the votes against Olaf Scholz and the SPD, which surprisingly got 25.7% of the votes.