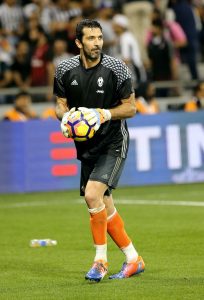 How rich is Gianluigi Buffon?

Gianluigi Buffon has been playing football at the highest level for over 20 years. Accordingly, the goalkeeper can have an impressive collection of titles. In addition to eleven national championships in Italy and France, he was world champion with the Italian national team in 2006. He is now the record player in Juventus Turin and the Italian selection. Gianluigi Buffon is one of the richest footballers. The cherished Gianluigi Buffon’s net worth is 70 million euros.

How much money Gianluigi Buffon made in his career

As a regular goalkeeper for the Italian series champions, Gianluigi Buffon was one of the club’s top earners in the 2000s and 2010s. His annual wages ranged between ten and twelve million euros. As he got older, however, he had to make do with less money. When he renewed his contract with Juve in the summer of 2016, his salary was four million euros per year. He earned just as much in 2018/2019 after moving to Paris Saint-Germain. When the goalkeeper returned to Turin in the summer of 2019, he did so for significantly lower pay. The salary of Gianluigi Buffon at Juventus Turin was most recently “only” 1.5 million euros per year. With his fortune, he is one of the richest footballers alongside Cristiano Ronaldo, Lionel Messi, Zlatan Ibrahimovic, Gareth Bale & Co.

By moving to his youth club Parma Calcio in the summer of 2021, he would like to help the relegated from Serie A in the fight for promotion. If he fulfilled his 2-year contract, Buffon would be 45 years old.

From 2009 to 2014 Buffon bought shares in the Italian textile company Zucchi for a total of 20 million euros in order to avert its bankruptcy. At the end of 2015, he had to sell the shares again with great losses. After all With his commitment, he ensured that Zucchi did not have to lay off any employees.

From the youth team to the big stage

Despite an offer from AC Milan, Gianluigi Buffon, then 13, joined AC Parma in 1991. There he tried out several positions as a field player until he finally became a goalkeeper. From the summer of 1994 he trained with the squad of the professional team and stood in November 1995, two months before his 18th birthday, for the first time in a Serie A game on the pitch. There he kept his box clean in the 0-0 win against eventual champions AC Milan and defused the chances of football greats like George Weah, Roberto Baggio and Marco Simone.

After further missions in the 1995/1996 season, he was appointed goalkeeper of his club for the following season. In his 27 games of the season he had to accept only 17 goals and attracted attention with his performances at clubs in Italy and Europe. With AC Parma, Buffon won both the UEFA Cup and the Italian Cup in the summer of 1999. After two more seasons in Parma, the goalkeeper moved to Juventus Turin in the summer of 2001. His new one Club paid 54.1 million euros for him, which was the highest transfer fee for a goalkeeper until then.

In Turin, Gianluigi Buffon significantly expanded his collection of titles. Between 2002 and 2018 he won nine championships with Juve. Two further successes from 2005 and 2006 were subsequently revoked from the club. In addition, the goalkeeper and his club won the Italian Cup four times in a row from 2015 to 2018. Juve were three times in the final of the Champions League with Buffon, but could never win the most important European title.

Buffon’s career in the Squadra Azzurra

Gianluigi Buffon made his debut for the Italian national team in October 1997. The first tournament he took part in was the 2002 World Cup. The greatest success with the Italians Buffon celebrated at the 2006 World Cup in Germany when the Squadra Azzurra won the world championship. At the EM 2012, the goalkeeper and his national team reached the final again, but lost there against Spain. Buffon played his last international match in March 2018. With 176 appearances for Italy, he is the record international player in his country.

Excursion to Paris and return to Turin

After a total of 17 years at Juve, Gianluigi Buffon decided to leave the club in summer 2018. He then moved to Paris Saint-Germain on a free transfer. With the French, he won the national championship in the 2018/2019 season. However, after just a year in Paris, he returned to Juventus Turin in the summer of 2019. There he is planned as a substitute goalkeeper, but occasionally comes to appearances. So he graduated in July 2020 his 648th league game for Juve, making him the club’s record player. In the summer of 2020 Buffon won his tenth championship title with the Turin team. A year later he moved to his youth club Parma Calcio.