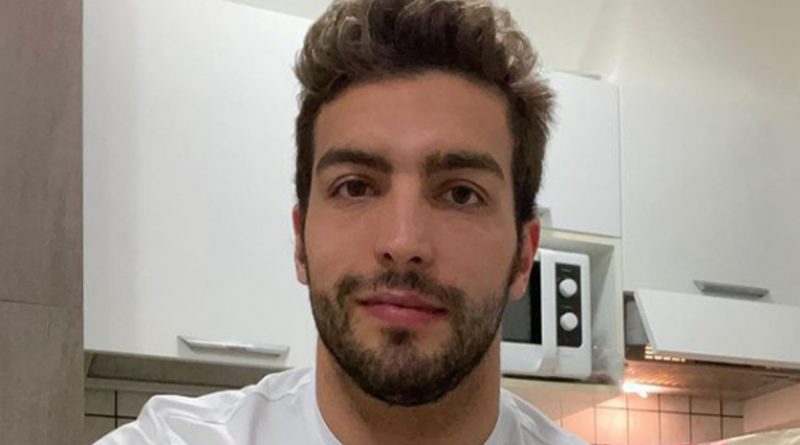 Gabriele Detti is a 26-year-old swimmer, originally from Livorno, who participates in the Tokyo 2020 Olympics. The athlete has already collected a double Olympic bronze at the 2016 Rio de Janeiro Games. World champion in the 800m freestyle 2017, Gabriele Detti will represent Italy at 400m and 800m freestyle competitions.

Who is it Gabriele Detti?

Gabriele Detti was born on August 29, 1994 in Livorno. Passionate about swimming since childhood, Gabriele immediately specialized in middle distance, paying attention to freestyle in the 200 and 1500 m freestyle. After completing his high school studies, he decides to move to the Federal Center of Ostia, under the guidance of his uncle, Stefano Morini. Gabriele Detti became known in 2012 when he won the title of Italian champion in the 400 freestyle. During his career, the swimmer from Livorno collects a respectable medal table, winning 27 golds at the Italian championships, one gold and two bronzes for the Europeans, one gold and two bronzes at the world championships and well two Olympic bronzes in Rio de Janeiro 2016. He was romantically linked to his colleague Stefania Pirozzi, until 2017.

From an early age, Gabriele was followed by Stefano Morini, a well-known swimming coach, as well as the young man’s uncle. Detti trains in Olbia, at the Federal Center, specializing in middle distance, and gaining good results especially in the 200 and 1500 m freestyle. In 2012 he imposed himself on a national level, winning gold at the Italian Championships, in the 400 m freestyle. In the same year, Gabriele Detti brings home:

Since 2014 Gabriele Detti’s career has reached very high levels. Establishes the new national and European record, in the 800 m freestyle (later surpassed by Gregorio Paltrinieri in 2015), during the Italian Championships in Riccione. At the 2014 European Championships he qualifies for all the finals of the categories in which he participates: 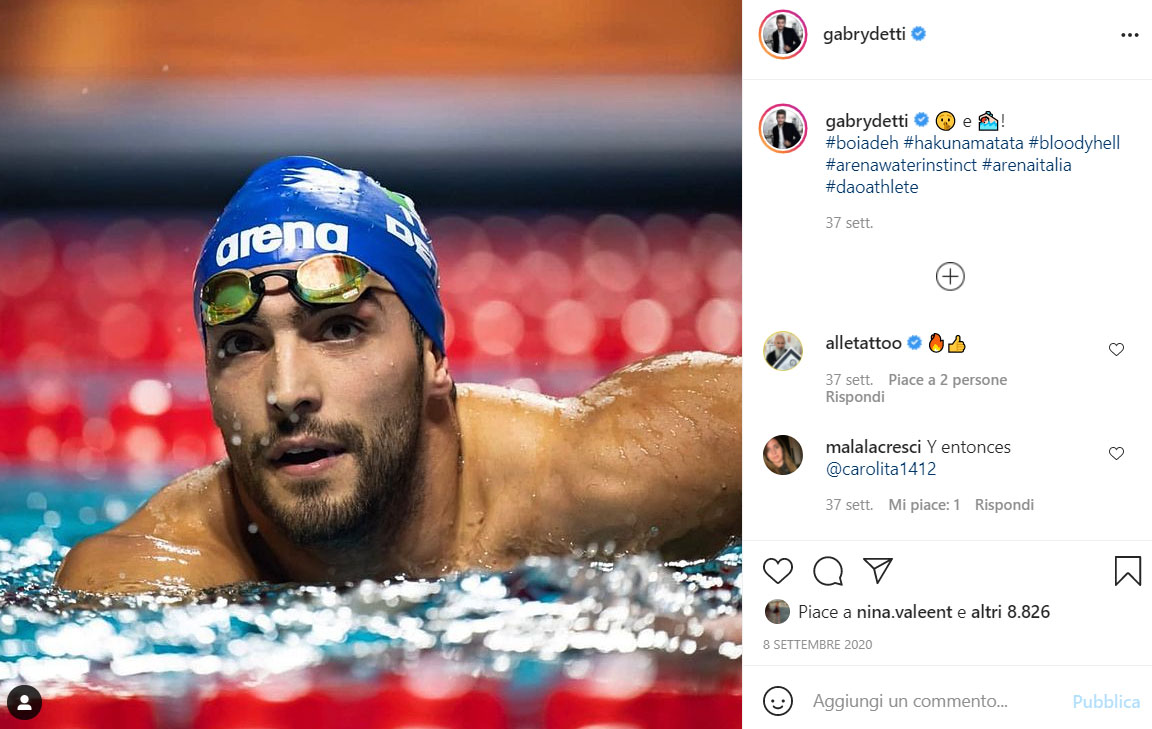 2015 sees Gabriele Detti face a serious urinary tract infection, which do not allow him to compete in the annual races. He skips the World Championships in Kazan, but as early as December he returns to the pool at the European Short Course Championships in Netanya, where he wins silver in the 1500m freestyle, and bronze in the 400m.

Immediately after recovering from the 2015 stop, Gabriele Detti returns stronger than before and a golden season opens up for him. He wins 3 golds and one silver at the 2016 Italian Championships, which earned him the qualification for the 2016 Rio de Janeiro Olympics, in the 400 and 1500 m freestyle categories. At the European Championships in London it is even better for Gabriele, who wins:

In August 2016, on the occasion of the Rio de Janerio Olympic Games, Gabriele wins the bronze medal in the 400m freestyle. After a few days he took part in the 1500m freestyle competition and won the bronze again. Together with him on the podium, also Gregorio Paltrinieri, with the gold medal. Together with Domenico Fioravanti and Davide Rummolo (Sidney 2000), also together on the Olympic podium, the presence of Detti and Paltrinieri on the same, makes them enter the history of Italian swimming. 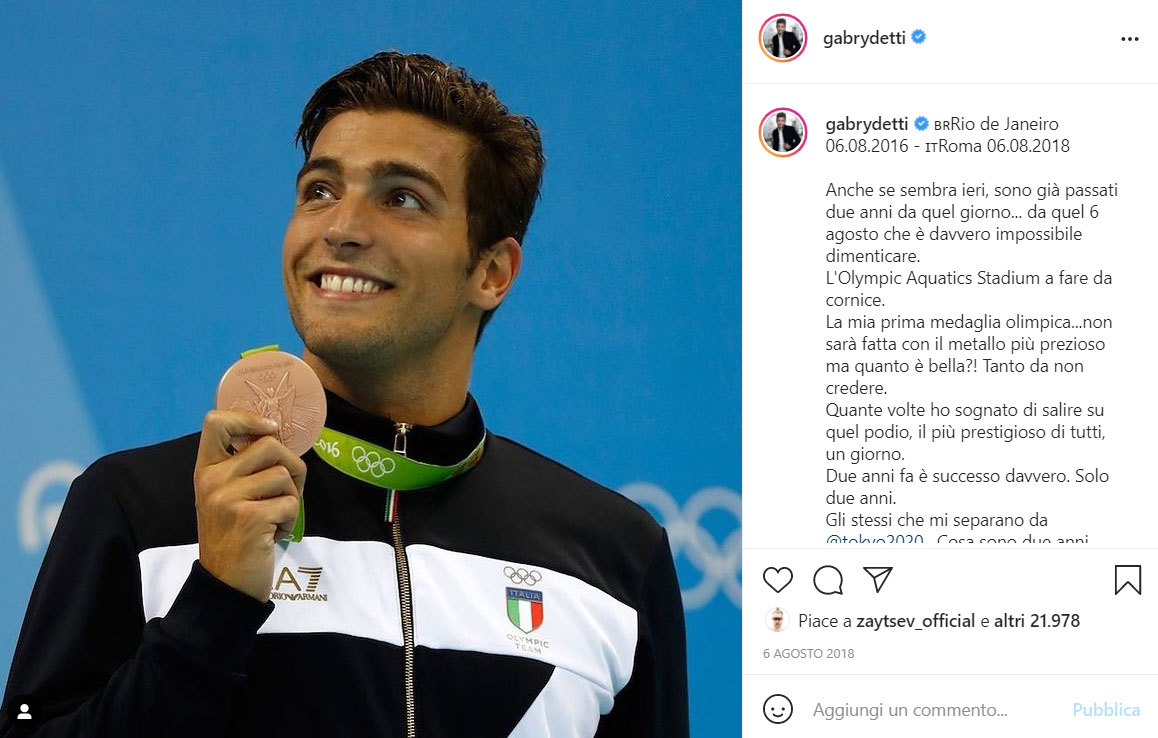 After the excellent performance at the 2016 Olympics, Gabriele spends 2017 reaching other notable goals. He establishes the new Italian record in the 400 m, snatching it from Massimiliano Rosolino, and at the 800 m of the European championships he conquers the second European performance ever as well as his personal best.

In July 2017 he achieved the most important success of his career: wins the gold medal in the 800m freestyle, modifying the European record (previously held by Paltrinieri). In 2018, however, he was again blocked by an injury, this time in the shoulder, and did not participate in the European Championships. He returns to the pool in 2019 and wins the bronze in the 400m freestyle at the Gwangju World Championships, setting the new Italian record, and beating the old record he had set himself.

Gabriele Detti at the Tokyo 2021 Olympics

Gabriele Detti participates in the Tokyo 2021 Olympics. He has decided not to participate in the 1500m freestyle competition, but only in the 400 and 800m freestyle races.

Gabriele Detti participate in Tokyo Olympic Games 2021, which will be held from 23 July to 8 August 2021, in the 400 and 800 m freestyle category. Initially scheduled for the year 2020, the Olympics have been postponed due to the COVID-19 pandemic. Italy presents great athletes at the Tokyo 2021 Olympic Games, among which we remember

Gabriele Detti will be in the race already in the first days of the Olympic Games, in fact the July 24 will go down into the water for the batteries of the 400 freestyle and the July 27 for the 800 style together with Gregorio Paltrinieri.

Gabriele Detti lives in Olbia for sporting commitmentsi, in fact, trains with his uncle Stefano Morini. He often returns to Livorno where his family lives.

Di Gabriele is known to have been linked for several years with his colleague Stefania Pirozzi, from Benevento born in 1993. The two lived in a long-distance relationship for quite some time. Wanting to focus on their career, they decided to end their relationship.

Gabriele has only one tattoo: the 5 Olympic circles on the inside of his right arm; made on the occasion of the 2012 London Olympics. 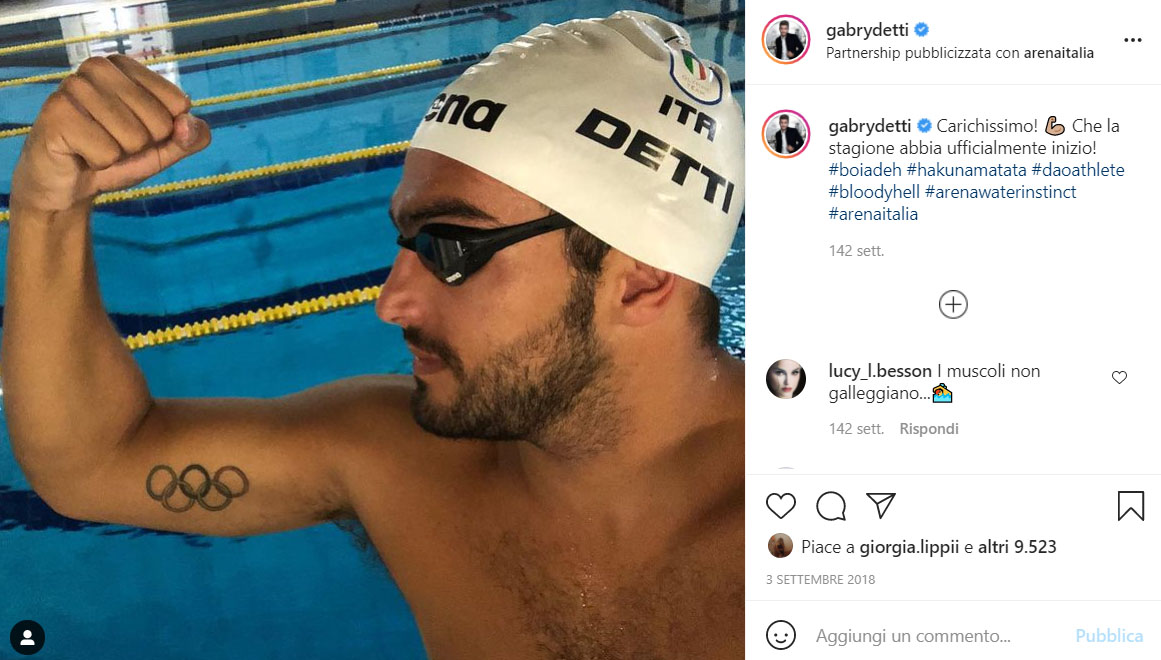 Very active on social networks, the instagram profile of Gabriele Detti, is followed by 132 thousand followers. The young swimmer from Livorno often shares posts that see him in the pool, but also with friends or family.

Here is a video that summarizes Gabriele Detti’s great achievements.