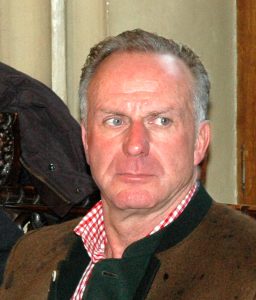 How rich is Karl-Heinz Rummenigge?

Karl-Heinz Rummenigge is a former soccer player and today’s soccer official. Born in Lippstadt, he played for FC Bayern Munich, Inter Milan and Servette Geneva during his active career. In addition, Rummenigge was the captain of the German national soccer team and is still considered a gifted soccer player to this day. He then became a functionary at FC Bayern Munich, where he will remain Chairman of the Board of Management until June 30, 2021. The cherished Karl-Heinz Rummenigge’s assets are 35 million euros.

Playing career in the club

Rummenigge inherited his father’s passion for football at an early age. In a C youth game he scored half of all goals with a 32-0 win – the exceptional talent was certain to attract attention early on. In the year In 1974 the striker received an offer from Bayern Munich. He decided against the apprenticeship he had started as a banker and switched to FCB in the Bavarian capital. His first salary there was 8,000 euros a month.

Karl-Heinz Rummenigge established himself as a regular player and stayed with FC Bayern for 10 years – during this time the Munich team celebrated various titles. His personal best was 29 goals in one season. In 1984 he went to Inter Milan for around 10 million German marks. In his three years in northern Italy Rummenigge was injured frequently and could not lead the Milanese to a title. His career finally ended at the age of 33 playing soccer in 1989 in Geneva, where he was the top scorer for the last time with 24 goals.

He played his first game in the German national team in 1975 – but still with the B selection. A year later it was enough for the A-Elf. His first World Cup participation followed in 1978 in Argentina. Two years later, the young striker became European champion in Italy and celebrated his only title in the German national team. As captain, however, Karl-Heinz Rummenigge managed to lead his Germans into the World Cup finals twice. However, the national team Italy and Argentina had to admit defeat. After losing the final against Argentina at the 1986 World Cup, the striker ended his DFB career.

Rummenigge’s career has been one of successes. With the national team he was twice vice world champion and once European champion. In addition, there are two championships, two DFB Cup victories and two European championships in his vita. Karl-Heinz Rummenigge became Top scorer in the Bundesliga several times, Germany’s footballer of the year and won the election for the best European footballer.

After his career, the former professional first became a commentator. At ARD, he then moderated numerous international matches for the German national team. In 1991 the then President of Bavaria decided to bring two well-deserved players back into the club: Franz Beckenbauer and Karl-Heinz Rummenigge thus became vice-presidents of their beloved football club. The Lippstadt resident kept his post until 2001. In the course of the legal conversion of the FC Bayern Munich to a stock corporation on December 21, 2001 was Karl-Heinz Rummenigge appointed CEO. The replacement has already been decided – Oliver Kahn should officially take over the post on December 31, 2021, while Karl-Heinz Rummenigge will then be able to take his well-deserved retirement. According to media reports, however, the handover will already take place at the end of June 2021. In the meantime, he was also chairman of the European Club Association (ECA), which represents the interests of European football clubs.

Private life of the Munich veteran

In private life, Karl-Heinz Rummenigge is happily married. His wife Martina has been at his side since 1978. Incidentally, at the age of her marriage, she pointed out to her husband that she would like to have five children. Said and done. Today they are both Rummenigges proud parents of five children. In addition, some grandchildren have already joined them.

A crime from 2013 caused a stir. The CEO of FC Bayern Munich wanted to Import two luxury watches worth 100,000 euros into Germany at the airport without having to declare them. The Munich district court then sentenced him to a fine of 249,900 euros. So he is actually considered a criminal record. However, the offense was serious enough that he would have to be released from the duties of a stock corporation.