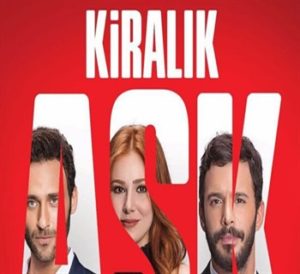 Kiralik ask is a Turkish romantic drama television series that aired from 2015 to 2017. The series was broadcast for the first time in Turkey on Star TV and immediately found considerable success. In his native country Kiralik ask was one of the most popular television series but at the same time it was broadcast in various countries such as: Lithuania, Spain, Bulgaria, Iran, Montenegro, Serbia, Romania, Lebanon, Macedonia, Arab League, Albania, Afghanistan where has found equally successful.

Omer Iplikci is a well-known designer in the footwear sector, heir to the immense heritage of the Iplikci family. In addition to being blatantly rich, Omer is a handsome and irresistibly charming guy who is busy seven days a week in the working world. He is a man with a closed and introverted character who gives little weight to love stories, in fact Omer is a real businessman. Before dying, Omer’s grandfather confesses his dream, which is to see his grandson on the altar.

To pursue this goal, the elder forces his son and daughter-in-law to find a girlfriend for the young Omer. The stakes for the two are very high, if they fail in fact, they would lose the huge inheritance. Defne accidentally runs into Omer’s aunt, Nergis Kumbasar, on the street, who takes advantage of the beautiful young girl’s need for money to offer her money in exchange for help. The plan of the two takes shape slowly, in fact the two want to make the grandson of the young Daphne fall in love and marry them and then make Daphne disappear for good.

Almost by chance the two really fall in love but Daphne has to deal with the agreement stipulated with the aunt of her beloved. In order not to make Omer suffer, Daphne decides to move away from him over and over again but the two are unable to live apart from each other. Theirs is a tormented love by the two ruthless uncles in search of their inheritance.

Barış Arduç: born on October 9, 1987, he is a Turkish actor of Swiss origin. In the tv series Kiralik ask, where the actor received huge success, played the wealthy shoe designer Ömer İplikçi who transforms from a stiff businessman into a sweet lover of young Daphne.

Elçin Sangu: born on August 13, 1985, she is a successful Turkish model and actress of Circassian origin. The beautiful model in the Turkish TV series plays the role of the young Defne, the beautiful girl who falls into the trap of Omer’s aunt because of her financial difficulties.

Nergis Kumbasar: is a Turkish model, actress, TV presenter and set designer born on May 25, 1963. The woman participated in the TV series Kiralik ask in the role of Neriman İplikçi, that is Omer’s bad aunt who tries at all costs to get her nephew married with the beautiful Defne and then make her disappear into thin air and collect the huge inheritance.

Kiralik Ask was available in streaming on youtube with subtitles in Italian. The series has been removed from Youtube in recent months.

Other Turkish Series To See