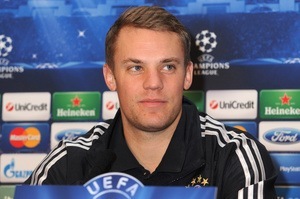 How much money does Manuel Neuer earn?

Manuel Neuer is a goalkeeper at Bayern Munich and earns around 18 million euros a year. They add to this salary numerous advertising dealsthat Neuer has signed or signed with various companies in the past and present, such as Adidas, Coca-Cola and Allianz, which should bring him another million a year.

At the beginning of 2020 it became known that Manuel Neuer and his wife Nina had split up. In May 2017, the couple said “yes”, but the once happy marriage only lasted until the end of 2019. The divorce was probably not cheap for the footballer despite an existing marriage contract and was consummated at the end of 2020. We reckon with almost 10 million euros for Nina, including some real estate, but the goalkeeper still has an incredible fortune. Manuel has allegedly been in a relationship with handball player Anika Bissel since March 2020. She is said to have already moved into his villa on Tegernsee.

The world goalkeeper Manuel Neuer, who was born in Gelsenkirchen on March 27, 1986, has always been a sports enthusiast. In contrast to many of his football colleagues, however, he did not commit himself exclusively to football at a young age, but still loves to play tennis and is still passionate about it.

At the age of five, Neuer joined the FC Schalke and played up there regularly within the youth teams. Than it finally 2005 to a professional contract came and Neuer had made the leap from amateur to professional footballer, but he played most of the time in the major league and only sat on the bench in two Bundesliga games. This rather inconspicuous professional career start was to change completely a year later, when he was first and finally number 2 in goal under Mirko Slomka to number 1 would.

As number 1, Neuer was only able to convince with his keen perception, his modern game and his long ball throws, which made him the best German goalkeeper in the 2006/07 season. Already in the 2007/08 season he was in goal at all Bundesliga games and impressed with his talent. This was well paid for him, because after all he earned around 3 million euros a year at FC Schalkethat were supplemented by advertising revenue. Compared to Neuer’s initial salary at FC Bayern Munich (approx. 7 million per year) The salary may seem low, but at least Neuer was only 21 years old at the time. An early contract extension in April 2016 to 2021 made him the top earner alongside Thomas Müller with an annual salary of 15 million euros and since the next contract extension in 2020 with an annual salary of 18 million euros, he is number two behind Robert Lewandowski. The FCB can thus continue to grow its assets.

Overall, the 2007/08 season was a very successful season for Neuer, because that was the first season when he was invited to a fitness test for the German national team. Since 2010 he has been able to convince in that team under coach Joachim Löw and delivered a strong performance at the 2010 World Cup, although he did not get a chance in the game for third place.

Around that time, FC Bayern Munich under President Uli Hoeneß became aware of Neuer and asked FC Schalke to take him against a Transfer of 22 million euros + success clauses to transfer to the traditional Bavarian club. After intensive negotiations, Neuer was transferred to Bayern in 2011, although this was partially criticized in advance on both sides. Due to some success clauses in the transfer agreement, FC Bayern has to transfer up to 11 more million to FC Schalke 04.

But Neuer was respected relatively quickly by the FC Bayern Munich fans for his extraordinary performance, with which he set new records and proved that he really did one of the best active goalkeepers was or is. In the 2011/12 season, he defended the goal for 770 minutes in a row without an opponent scoring a goal. At the same time, he repeatedly initiated fruitful attacks on the opposing goal through his objections, which is why he quickly became an indispensable part of the club.

In the meantime, Neuer can look back on a considerably large number of fans and also uses his good image for charitable purposes. So he has the Manuel Neuer Kids Foundation founded, into which he has paid, among other things, € 500,000.

World goalkeeper and other awards

After the triple victory of FC Bayern Munich in 2013, Manuel became, alongside the world footballer Cristiano Ronaldo World goalkeeper chosen. By winning the 2014 World Cup in Brazil, he was also honored with the golden glove for goalkeeper of the tournament.

In 2014, Neuer was nominated as a world footballer for the first time and competed directly against opponents Ronaldo and Lionel Messi for the coveted Ballon D’or. Unfortunately, he only finished third behind Ronaldo and Messi.

Manuel Neuer owns a house in Munich’s Bogenhausen district as his main residence, where he usually stays and lives close to his club. Furthermore, Neuer has been trying to get the approval of the Construction of a luxury villa on Lake Tegernsee, on which Philipp Lahm also owns a property. After some structural changes, Neuer received the green light and built his luxury domicile.

Since Audi is one of the main sponsors of FC Bayern Munich, Neuer also drives an Audi. He chose one Audi RS6 Avant with 560 hp, which is available for a list price of € 107,900.