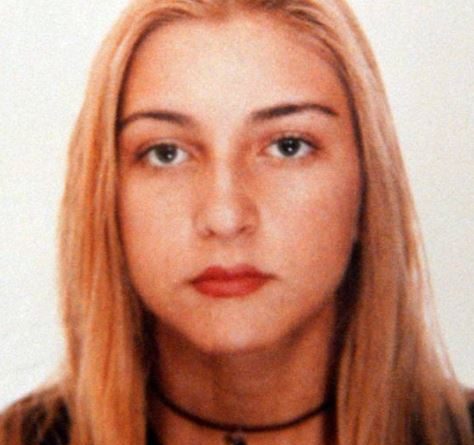 Marta Russo was the very young student killed in the mysterious murder of La Sapienza in 1997 inside the university city of Rome. Let’s find out all the details and who was the girl victim of the crime.

Read also: Sarah Scazzi, history: how and why was she killed? Murder details

Who was Marta Russo, a student killed at La Sapienza in Rome?

Marta Russo was a very young law student who on the morning of May 9, 1997, at 11:42 am, was in the wrong place at a totally inappropriate time. The girl, a former regional fencing champion, quietly walked a path inside the university city of La Sapienza in a carefree way, as only a 22-year-old girl with a whole life ahead of her could do. She was in the company of her friend Jolanda Ricci when a .22 caliber bullet hit her directly in the head.

The bullet penetrated the back of her neck, behind her left ear, breaking into eleven fragments that caused irreversible damage. Witnesses reported a muffled shot, as if from a silenced weapon, identified as a carbine or pistol (as will be discussed later in the trial).

Among the rescuers there was also the uncle of the student, an employee of the Sapienza. The girl was transported to the nearby Policlinico Umberto I, where she arrived in a coma. The girl’s brain death occurred on May 13, at 10 pm, as reported by the doctors. The parents, Donato Russo and Aureliana Iacoboni, and her sister Tiziana decided to donate the organs, following a desire expressed years earlier by Marta after seeing a television report on the Nicholas Green crime. 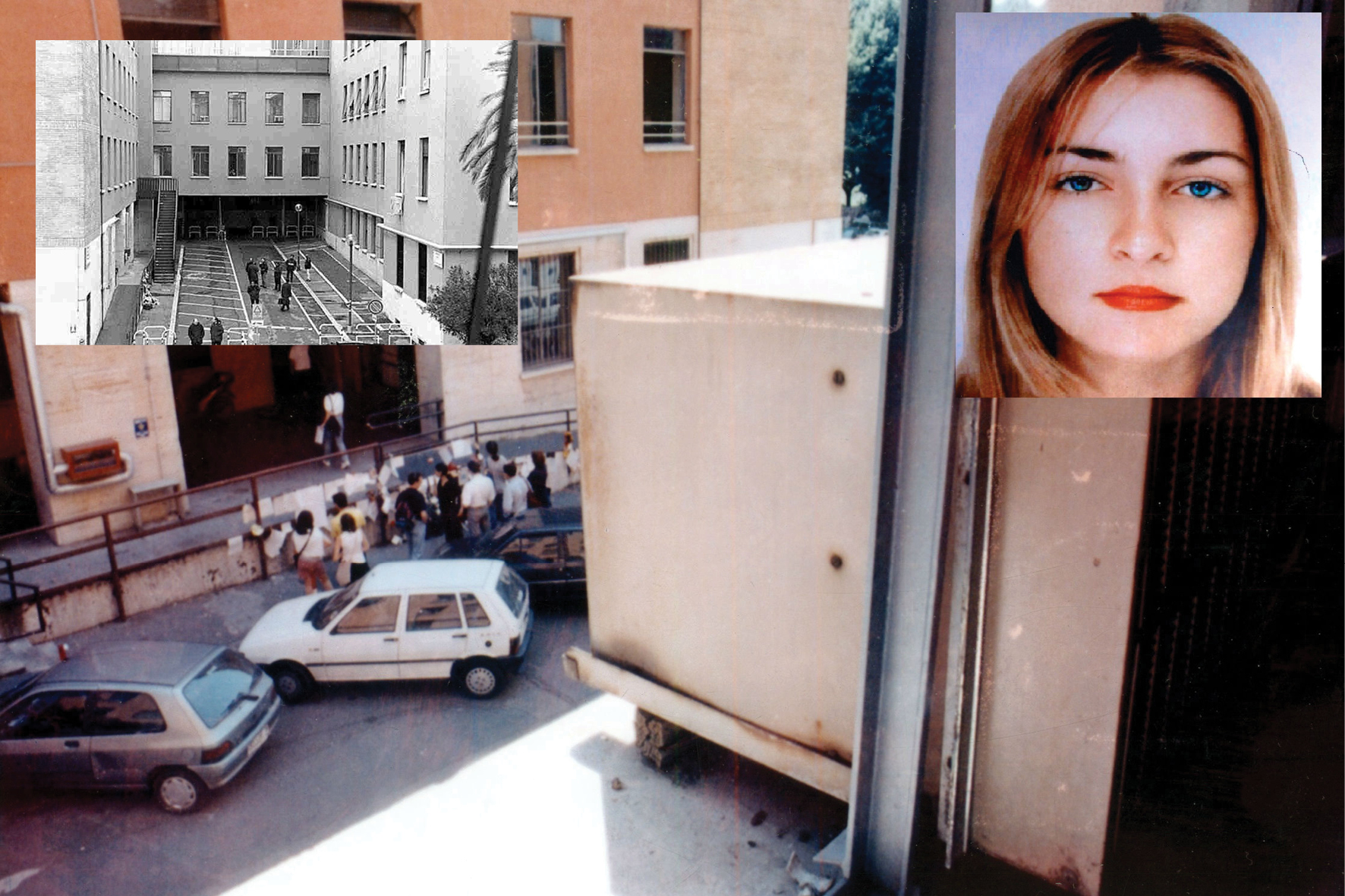 The places of the Sapienza murder where Marta Russo was shot / Photo: Cultura

The plug to the machinery that kept the girl alive was disconnected on the night of May 14: Marta was declared dead. Numerous politicians participated in the celebration of the solemn funeral, which took place inside the university, including the prime minister of the time Romano Prodi, Walter Veltroni, Luciano Violante and Luigi Berlinguer. There was also a large crowd of students, friends and ordinary people. Even Pope John Paul II sent a message to the family.

It is the sister Tiziana who, in the book dedicated to the girl, Marta Russo: my sister, retraces the life of the student, especially the last hours in the neurosurgery ward. Right between the pages of his writing we find news of Marta’s boyfriend. Here’s what he remembers:

To try to awaken her, we tried them all. With her boyfriend at the time, Luca, we spent hours beside her, hoping that she would hear the music we had brought her, her favorite song, “L’Aurora” by Eros Ramazzotti. Here, it would be nice if today, which is the anniversary, Eros dedicated a greeting to her on his Facebook page. It would make a great little gift. 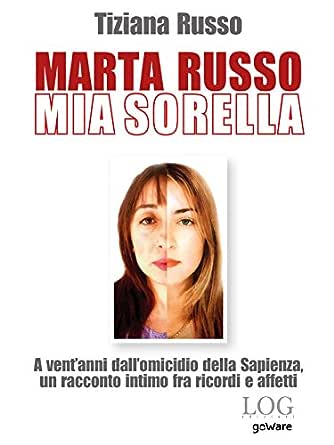 The book is an intimate story, between memories and affections.

He is the person found guilty of the murder of Marta Russo. At the time, Scattone was a university assistant at the chair of philosophy of law at the University of Sapienza in Rome. In 2003 he was found responsible with a final sentence for aggravated manslaughter. A sentence of 5 years and four months of imprisonment for manslaughter for him which also involved his colleague Salvatore Ferraro for aiding and abetting. Both denied any guilt charged to them, always asserting their innocence. 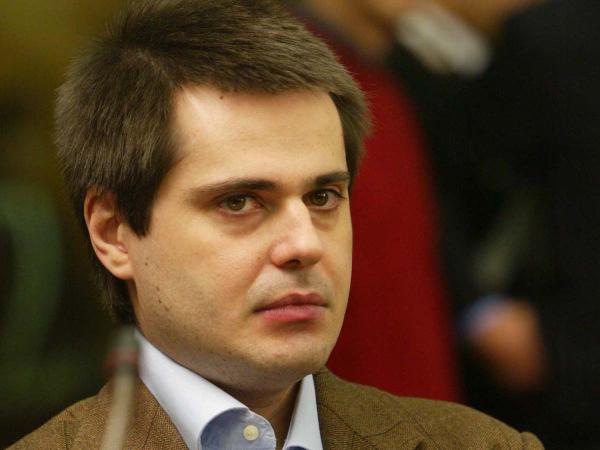 Giovanni Scattone, the university assistant of philosophy of law condemned for the death of Marta Russo / Photo: Roma.Corriere.it

In the first sentence it is specified that Scattone would have fired a shot by mistake, handling a gun for unknown reasons, perhaps to test the weapon by shooting against a wall or without knowing that it was loaded. Ferraro would have covered him, keeping quiet and taking the weapon away.

Room 6 of the Institute of Philosophy of Law is the protagonist of the judicial affair that saw the innocent victim Marta Russo. On May 19, 1997, forensics police discovered traces of gunpowder inside the room.

The exams in the classroom were also carried out because during the interrogations Maria Chiara Lipari, another assistant of the Institute of Philosophy of Law, on June 13 said that she had seen some people in room 6. Among these the persons indicated there were Gabriella Alletto and the usher Francesco Liparota. 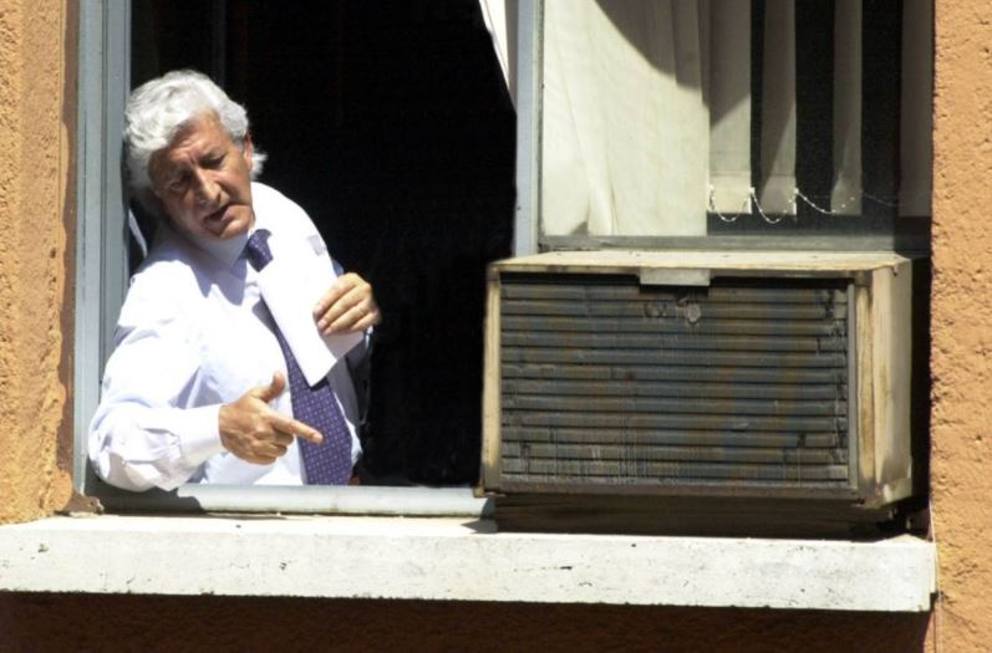 And it is Gabriella Alletto who on June 14 accuses and points the finger at university assistants Salvatore Ferraro and Giovanni Scattone, also confirming the name of Liparota. The three are arrested during the night for complicity in voluntary murder.

On June 1, 1999, the Assize Court sentenced Scattone to 7 years for manslaughter and Ferraro to 4 for aiding and abetting. Absolute the other people involved.

On May 3, 2000, room 6 once again became the protagonist of the investigations. The second degree trial opens. The Court of Assizes of Appeal has two new reports: the particle found on the window of room 6 would not be attributable to the bullet and the trajectory of the shot would instead be compatible with a shot started both from room 6 and from the disabled bathroom of the ground floor.

On November 30, 2002 the Court found Giovanni Scattone guilty of manslaughter and sentenced him to 6 years in prison, plus a ban from public office.

On 15 December 2003 the Supreme Court confirmed the sentences of Scattone and Ferraro with a slight penalty reduction: five years and 4 months for the first, 4 years and 2 months for the second. Scattone is transferred to Rebibbia.

After serving his sentence, first in prison, until 2004, then at social services dealing with the rehabilitation of the disabled, until 2006. No longer banned from public offices, Giovanni Scattone also worked as a substitute high school teacher: in 2011 he obtained a substitute in history and philosophy at the Cavour scientific high school in Rome, the same where Marta Russo had studied, generating conflicting opinions among teachers, parents and students regarding her readmission to teaching.

In 2015 he obtained a professorship in psychology at the Einaudi institute in Rome, becoming a permanent teacher, following the passing of the relative competition for professorship in 2012. However, he resigned from his post a few days later stating that he had lost the serenity necessary for that type of work. Today Scattone works as a translator, proofreader and ghost writer. 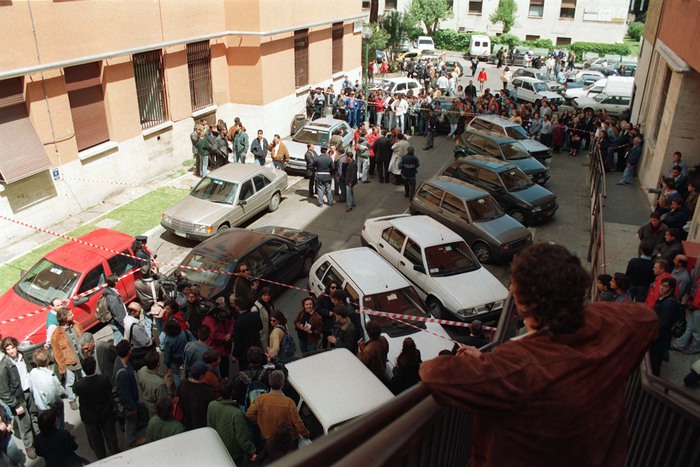 Over the years, the case of Marta Russo has become one of the unsolved mysteries of the Italian crime news.

The tomb of Marta Russo

Marta Russo is buried in the Verano Cemetery in Rome. The tomb has been located, since 2007, in a new sector compared to the original one, in box 85. 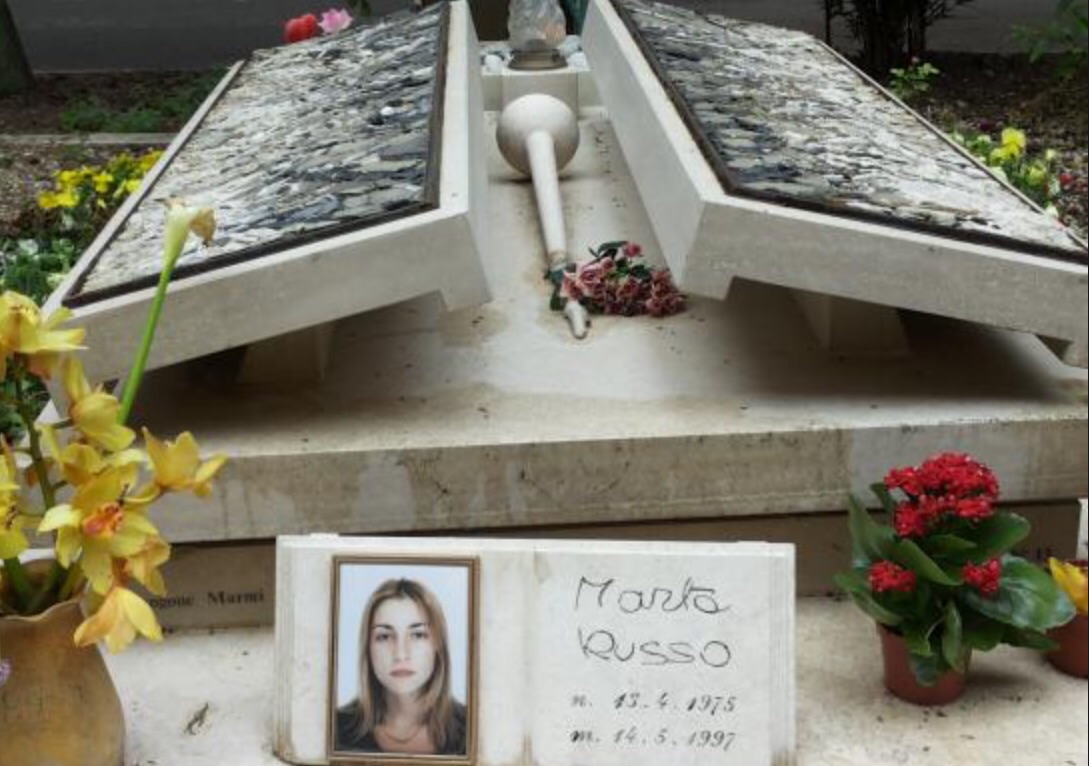 The tomb of Marta Russo / Photo: B in Rome

In memory of Marta Russo

Marta Russo was granted a degree in memory in the presence of the President of the Republic Oscar Luigi Scalfaro, in addition there is a commemorative plaque and some classrooms of the university are named after them. On May 26, 2001 the second edition of the fencing tournament Marta Russo Trophy it has gone international. 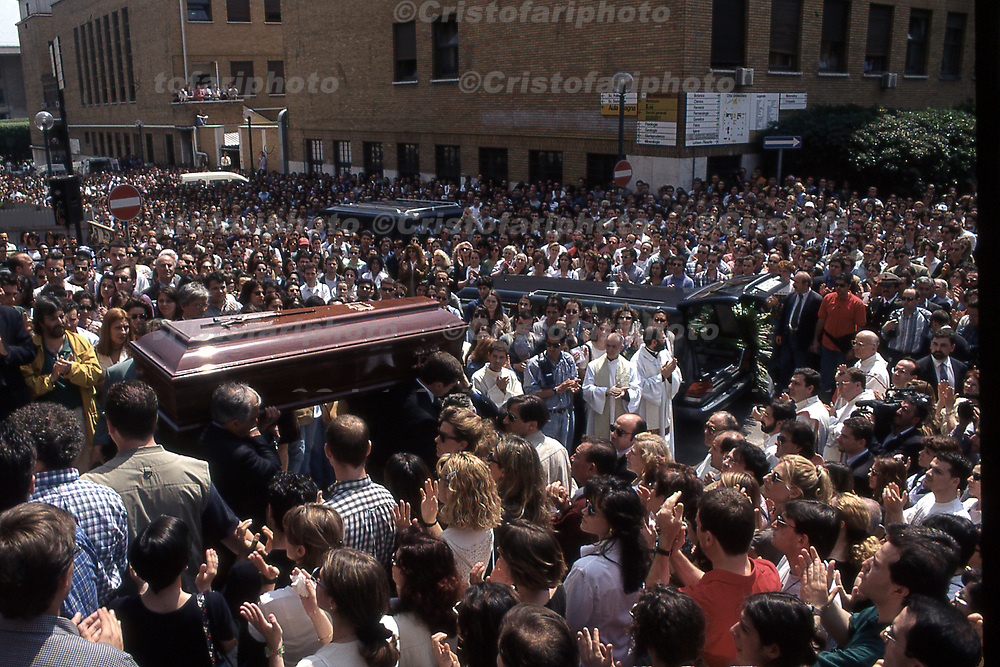 Crowd at the funeral of Marta Russo / Photo: Forum Community

In 2001 a park was dedicated to Marta Russo in the Labaro district in Rome, adjacent to via Gemona del Friuli. The award has been held since May 14, 2003 Marta Russo. Organ donation: a gesture of love in favor of life, aimed at students of secondary schools in Rome and its province, promoted by the Marta Russo Association and by the Province of Rome. On May 5, 2010, the Comprehensive Institute Via Italo Torsiello in Rome, a hamlet of Trigoria, was named after Marta Russo with a ceremony attended by the girl’s parents.