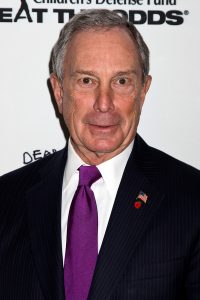 How rich is Michael Bloomberg?

Who would have thought that the former Mayor (2002-2013) of the Big Apple is roughly ten times as rich as Sir Richard Branson, who owns the world-famous Virgin Group? However, Bloomberg did not earn its billion dollar fortune as a politician, but as a clever entrepreneur. In addition to the news service Bloomberg Television, he also owns the financial data agency Bloomberg LP. He has also expanded his empire to include TV and radio presence as well as online trading. In the 2020 US presidential election, he wanted to officially run against Donald Trump as a Democrat. He spent the equivalent of half a billion euros on his own election campaign before backing down because of the poor performance in the primary elections and now supporting Joe Biden.

Bloomberg started out in the financial sector with the Salomon Brothers, now known as Morgan Stanley Smith Barney. He was made a partner there just six years after he was hired. The sale of Salomon Brothers in 1981 forced him to leave as well. However, he received an impressive sum of ten million US dollars for his company shares. In any case, the rich entrepreneur need not worry about money. Michael Bloomberg has an estimated net worth of 61.91 billion euros.

From 1982 Bloomberg was then active as an investor in Merrill Lynch. It shouldn’t be long before he started his own company. He dared to take this step in the same year. In the meantime, Bloomberg has made it all the way to the top with its corporate empire. Michael Bllomberg is one of the richest people in the world.

A man with a social streak

Michael Bloomberg wants to do a lot of good for the world. This was not only shown by his political commitment as Mayor of New York City. Rather, he has the Giving pledge which was founded by the two billionaires Warren Buffet and Bill Gates. In June 2010, he expressed his support for this philanthropic campaign, which calls for all participants to commit to donating more than half of their wealth to charitable causes during their lifetime. In October 2014 he was already honored for his “remarkable entrepreneurial and philanthropic activities”. Since then he has been able to call himself a Knight Commander and belongs to the Order of the British Empire.

In order to appear as mayor of one of the most famous cities in the USA, Michael Bloomberg had to put in one or two political maneuvers. Although he had initially taken a position as a Democrat, he made the move to the Republican Party of the United States in 2000. Because that way he could avoid the Democrats’ primary campaign. This created a better starting position for himself in the race for the mayor’s championship. In 2001 he actually won the election and thus succeeded Rudolph Giuliani. That Michael Bloomberg did not want to enrich himself as mayor also shows his symbolic salary, which was no more than one US dollar.

Even though he was now in office as a Republican, he campaigned for a policy that was fundamentally democratic. He didn’t just advocate marriage for same-sex couples. But also for the right of women to choose an abortion. Stricter gun controls were just as important to the entrepreneur. In fact, he managed to lower the crime rate in the metropolis of New York. Even if the methods with which he achieved this were in part controversial. The low-cost housing that Bloomberg created in New York benefited the socially disadvantaged population there particularly well. Michael Bloomberg did a lot of good as Mayor of New York.