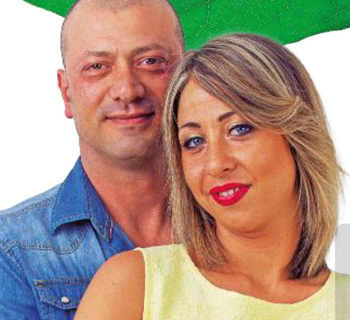 Sofia and Alessandro (whose full names are Sofia Calesso and Alessandro Medici) I am one of the couples participating in Temptation Island 2020 with a age difference of 17 years. Thursday 2 July officially begins the eighth edition of one of the most loved reality shows by Italians, that is Temptation Island, again this year by Filippo Bisciglia, the historical presenter of the program, among the participants there are also Alessandro Medici and Sofia, the two, both from Perugia, they have been engaged for four and a half years and they hope that the island can revive their love life. The confrontation bonfire is staged in the second episode of the program after Sofia has said a few things to the Single Alex which infuriated Alexander.

Who are Alessandro and Sofia?

Alessandro Medici was born in Rome in 1973, has a sister named Emanuela and a brother named Gianluca. Alessandro has a marriage behind him (he is still on excellent terms with his ex as he declared during the program) and shares two children with her, one named Giulia and one named Christian. His motto on Facebook is “we are all useful and none indispensable”, a motto that surely helped Alessandro to form his determined character.

Alessandro participates in Temptation Island with his girlfriend Anna, but on Facebook we can see how his status is “single”.

Alessandro works in the family butcher’s shop “The King of Medici Meat” which is located exactly in Castel Del Piano in the province of Perugia. In addition to dealing with meat, his shop prepares cooked and raw foods.

Sofia Calesso has two sons named Sami and Lorenzo aged 9 and 7. Sofia on Facebook defines them as her blue princes, the only “men” who have given her happiness. Sofia currently works as a housewife and being a divorced mother she certainly dedicates a lot of time to the growth of her children. On May 4, 2020 Sofia dedicates a romantic post to Alessandro on Facebook. The couple therefore did not appear to be in crisis this spring. Finally, Sofia is also a great lover of sushi!Carlo Siano, one of the Temptation Island singles follows her on Instagram.

Alessandro and Sofia have been engaged for four and a half years. He, Alessandro Medici, works as a butcher and is separated, he has two children aged 20 and 24 named Giulia and Christian. She, Sofia, whose surname is Calesso, is a housewife with a marriage behind her and two children aged 9 and 7.

Alessandro is very attached to Sofia, in fact, in the presentation video she immediately declares that she has fallen in love with Sofia for her eyes, eyes that she defines “the most beautiful in the world“. In fact, their relationship has lasted for four and a half years, for a certain period their love story went very well, unfortunately, however, suddenly they had some back and forth. Alexander himself explained that during these periods of quarrel you continue, Sofia has been dating another man for about six months. From some rumors on social media, however, it seems that in these times of quarrel Sofia has come close to more than one man. On the other hand, it seems that Alexander also replied to Sofia with the same coin. Their relationship does not have the blessing of Alexander’s family, especially from his brother Gianluca who on social media did not miss the opportunity to express his opinion on the couple. As for Sofia instead, not much is known about her family but we know that the age difference between the two has never been a problem for her. What is certain is that he is 30 years old, in the video he explains that his relationship with Alessandro is “born a thousand” but later came the problems that led them to participate in Temptation Island.

Why do they participate in Temptation Island?

The reasons that push Sofia and Alessando (whose surname is Medici) to participate in the reality show Temptation Island are many. Their relationship has lasted for four and a half years, after some back and forth however, Sofia has approached another man for about six months, this obviously hurt Alessandro’s feelings. From social media, however, it seems that Alessandro also attended, perhaps to make Sofia jealous other women in times of quarrel. Sofia hopes that temptation Island can be an opportunity to recover Alexander’s relationship, but this instead believes that the island of temptations is literally a last resort for his fiancée, or the opportunity to really understand who he is. Will the feelings of the two be able to triumph over the temptations on the island? and above all, will the couple come out of the program divided or whole? To find out, we just have to wait for the start of this edition full of news.

In the first episode of Temptation Island Sofia he is already in tears: he must have seen something Alexander that left her upset. Sofia and Alessandro are already in crisis: 11 singles and 12 singles are having an effect on the couple.

One month after the end of the program Sofia and Alessandro show up separated. Alessandro in particular is the first to introduce himself and says that he felt disrespectful and that therefore he distanced himself from Sofia. Alessandro says that his family is also supporting him in his decision to reflect and stay away. Alessandro will take his time and understand if he wants to be with her. Sofia’s turn comes and says she is very sad. They were together many days after the bonfire and they went well. Alessandro’s change of mind for Sofia was a deadly and unexpected blow, after a dinner with her family. Annamaria says that the problem between them is always and only the family. The transitory phase they are experiencing is characterized by the fact that according to Annamaria sometimes he wants to be with her sometimes alone and that the love for his family, which does not approve of the story, is conditioning him. Annamaria also states that Alessandro the single Beatrice resented and she knows for sure. Could this play a role in Alexander’s behavior? Annamaria cries and claims she doesn’t understand her boyfriend (or ex-boyfriend) behavior.

Couples participating in Temptation Island 2020, besides Alessandro and Sofia are: Antonio and Annamaria (his name is exactly Antonio Martello), Ciavy and Valeria, Anna and Andrea. The VIP couples are represented by Antonella Elia and Pietro Delle Piane, Manila Nazzaro and Lorenzo Amoruso.

The couples of the September 2020 edition of Temptation Island are: Nadia and Antonio, Serena and Davide, Sofia and Amedeo, Speranza and Alberto, Anna and Gennaro, Carlotta and Nello.

Couples participating in Temptation Island 2020 including Alessandro and Sofia: