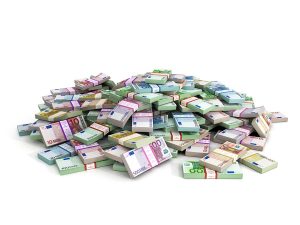 eBay celebrated its 20th anniversary in 2015. At the beginning, the company was founded in September 1995, it was the modern version of the advertising paper. You could buy and sell used goods there. Today eBay is one of the world’s largest online portals. Thousands of items are auctioned here every day or bought at a buy-it-now price. And there is almost nothing that hasn’t been offered on eBay before (except for the things that are considered illegal by eBay): From socks to designer clothes, antique chandeliers, sticky tattoos and canned air to the luxurious stretch limousine .

In the second quarter of 2015, the Sales from eBay with unbelievable $ 4.4 billion and thus achieved an increase of 7% compared to the previous year. The net profit was thus $ 931 million.
No wonder, because eBay earns 10% commission on every item sold. There are also fees for additional options. EBay should therefore have been particularly pleased about the following 10 auctions, which ended with a record price.

These are the 10 most expensive eBay auctions:

In 1962 a meteorite fell to earth in Nigeria. It is one of the largest pieces of meteorite found and weighs 0.124 grams. $ 450,000 this little piece of stone was worth the auctioneer.

In 2004 an eBayer was able to get a real “bargain”. Because he bought one of the rare Enzo Ferraris, of which only 399 were made. The original buyers were people who were selected and contacted by Ferrari. The list price was around then with accessories 700,000 euros. One of the owners of such a rarity was apparently forced to sell his car again. One bidder was lucky and was able to purchase the exclusive sports car for “only” 485,000 euros to buy. Today the value of an Enzo Ferrari is over 1 million euros estimated.

In 2000 it became a trading card for baseball $ 1,265,000 auctioned on eBay, which featured the hugely successful baseball player Honus Wagner. The trading card was then printed and published by the American Tobacco Company. However, Honus Wagner had the production stopped because he was against tobacco consumption and did not want to support it. Thus only 57 copies of this card were distributed and today it is one of the most coveted sports collectibles in the world.

Yes, actually, entire cities have already been auctioned on ebay. The first was Bridgeville, a small town in California, USA in 2002. However, since the city was so ailing, it was auctioned again in 2006 and brought back $ 1,770,000. Now the new owner can dispose of 25 residents, a post office, eight houses and a café.

In 2002 someone indulged in the feeling of complete security. From the outside a completely normal holiday home, but a bunker underground, in which one would be safe even in the event of a nuclear war. During the Cold War, the facility served as a missile silo until two architects converted the area into a residential complex. With stately $ 2,100,000 the auction finally ended and the bunker had a new owner.

And again a small American town: In 2007, the village of Albert will be proud of $ 2,500,000 auctioned. It was offered on eBay back in 2003 and for only $ 216,000 bought by realtor Bobby Cave. He restored the historic town that once lay on a stagecoach line and was able to reap a considerable profit only four years later.

A nice lunch with an interesting personality can be so lovely. In 2010 an eBay bidder bought a lunch with the American multimillionaire Warren Buffett. This was fabulous for him $ 2,166,766 worth. But Buffett didn’t put the money in his own pocket. He organizes this auction every year, the proceeds of which go to benefit those in need in San Francisco. However, the 2010 proceeds are unmatched.

A private jet is arguably the epitome of luxury living. In 2001 a Gulfstream II jet from the American business airline Tyler Jet was auctioned on eBay. The auction caused a sensation because it was one of the online auction house’s first very high-priced auctions. $ 4,900,000 a bidder bought the 12-seat aircraft. This is especially amazing because this type of aircraft typically sells for around $ 1,000,000.

Number one of the most expensive eBay auctions of all time is the final price of a luxury yacht auction. Although the term “mega yacht” is probably more appropriate in this case. Frank Mulder designed the noble ship, which houses a cinema, a spa, eight guest rooms, an elevator and a helipad, among other things. For the unimaginable $ 168,000,000 Russian billionaire Roman Abramowitsch bought the mega-yacht at auction in 2006.