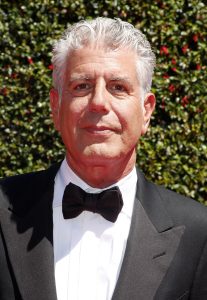 TV chefs Tim Mälzer and Jamie Oliver show how it is done – more and more smart chefs have seized their chance and become real celebrities. While a cook in a school kitchen might only earn starvation wages, some of the star chefs are now multiple millionaireswho are known for their keen business acumen. The richest chefs in the world not only earn money with their own restaurants, but also with books, fan merchandise and TV shows. But Johann Lafer is still a little way away with his fortune.

In comparison, a chef in the US only makes $ 71,000 a year. The 13 richest chefs in the world can only laugh about that. Because they have elevated themselves to a brand and can increase their market value more and more through clever marketing, the right products and PR strategies. Many of them are so busy with their numerous projects that they no longer have the time to stand in the kitchen in their restaurants. Cooking shows like “Cutthroat Kitchen,” “Master Chef” or “Top Chef” are spilling over from the USA to Europe more and more, so that many of the 13 richest chefs have meanwhile become international stars. So who are they the 13 richest chefs in the world?

These are the 13 richest chefs in the world

The first woman on our list of the richest chefs is also known as Miami’s most attractive cook. The Cuban woman left many of her family recipes in her work “Cuban Chicks Can Cook” incorporate what was sold out in bookstores in the USA within a very short time. Ana then performed a number of television and radio appearances and was able to cement her star status even further. Her cookbook “Sabor! A Passion for Cuban Cuisine ”is available for $ 25. She also works as an advertising character for IMUSA, the Cuban cookware brand par excellence, and also deserves a golden nose.

No. 11 of the richest chefs on our list goes to the American Paula Deen. With a total of 14 own cookbooks and one own restaurant called Lady & Sons Paula Deen is one of the most famous star chefs. The smart Paula works with one of the largest companies in the world: Her desserts are sold at the retail giant Walmart. Paula, who has even been a guest at Oprah Winfrey, was also able to demonstrate her talent for sales at the home shopping channel QVC. With her show “Paula’s Home Cooking” the American was able to further expand her star status in cooperation with the Food Network. In 2015, she even launched her ROKU channel, the Paula Deen Channel, so that her fans can now see her around the clock.

The Emmy Award winner owed his fortune largely to his TV show “No Reservation”, which can be seen in the US on the Travel Channel. Incidentally, Bourdain learned his trade at the Culinary Institute of America. But it wasn’t his cooking skills that made him a celebrity. Rather, the American only became a star in the cooking scene with his book “Kitchen Confidential: Adventures in the Culinary Underbelly”. As of 2013, Anthony even had one Show on CNN, the “Anthony Bourdain: Parts Unknown” was titled. This ran until his death in 2018.

With an estimated net worth of $ 20 million, Nigella Lawson is in her own league. The London-born chef is also a journalist, book critic and television personality. Many of her talents were inherited from her in the cradle. Her parents were caterers and they owned the J. Lyons Company catering company. As early as 1998, Nigella Lawson was able to sell more than 300,000 copies of her first book, “How To Eat”. In 2000 her book hit “How To Be A Domestic Goddess” especially with the female target audience like a real bombshell. With her first cooking show, Nigella was already on the BBC in 1999, when there were only a few other celebrity chefs.

Mario Batali is also one of the absolute top chefs who has an equally impressive star status. Along with his business partners, the TV personality owns numerous restaurants in Singapore, New York City, Las Vegas, Los Angeles and Hong Kong. The somewhat corpulent Mario was on the Food Network from 1996 to 2004 with his show “Molto Mario”. Also the The New York Times honored him with 4 stars and made him the first top Italian chef to do this in over 40 years.

Ina Garten was able to impressively prove her ability in 7th place among the richest chefs. Her “The Barefoot Contessa Cookbook” made her rich, which is now in its third edition. Her eponymous show can also be seen on the Food Network in the USA and has made Ina a true icon among top female chefs. The amazing thing is that Ina Garten was never trained professionally as a cook, but herself has easily taught himself to cook with the help of various cookbooks. Julia Child’s cookbooks in particular have brought Ina a decisive step on her way to the top and have served her well.

David Chang is a Korean-American chef with a whopping $ 50 million net worth. He shares the 7th place among the richest chefs with Ina Garten. David Chang was born in Vienna in 1977 and is the founder of Momofuku Restaurant Group. This also includes milk bars and pasta houses. The restaurants are located in New York, Sydney, and Toronto. In 2009 it received two Michelin stars and has kept them to this day. There are no vegetarian options for David Chang. He has already received numerous nominations and awards. He was also a guest judge at MasterChef Australia.

Two food network shows have contributed to the staggering fortune of Emeril Lagasse. He learned his trade at Johnson and Wales Culinary School. In 2009 Emeril was able to convince the TV audience again when he became one of the Jury members series “Top Chef” was appointed.

Rachael Ray is not only one of the top chefs of the stars, but is also a star herself. The entrepreneur, author and TV personality clearly knows how to take advantage of the opportunities that have all been offered to her in the course of her impressive career. Numerous successful TV shows on the Food Network as well as best-selling cookbooks go to her account. The beautiful Rachael was even able to look forward to 3 Daytime Emmy Awards for her show. One of the secrets of their success is that most of their recipes can be cooked by their fans in just 30 minutes. The celebrity chefs say of themselves that they are completely unqualified for their job, since she was never trained as a cook.

The Austrian Wolfgang Puck has made it to Hollywood as a real top chef. He has cooked for Academy Awards guests countless times. Puck gives one under his name Range of canned food out. He also operates 80 Wolfgang Puck Express restaurants, a catering service and around 20 fine restaurants.

The French, who was a good 150 million euros until his death, owned numerous restaurants. Paul Bocuse also invented the truffle soup himself. He was one of the few with his restaurant Auberge du Pont de Collonges London restaurants received 3 stars. The top chef was considered an ambassador of modern French cuisine. In 2011 he was honored with the Chef of the Century Award from the Culinary Institute of America. Many top chefs continue to celebrate him after his death (2018) as the ultimate chef.

The Scot is not only known for his cooking skills, but also for his big mouth. The following successful shows have made Gordon a real phenomenon among top chefs:

In 2006 he was able to secure the Independent Restaurateur of the Year Award. He named his restaurant in London after himself. The Gordon Ramsay has been one of the top restaurants in the metropolis of London for 8 years. In 2013 he even made it into the Culinary Hall of Fame. In 2016, Gordon Ramsay earned fabulous $ 54 million.

Jamie Oliver has made it to the top among the richest chefs. The British celebrity chef is working hard to fill up a quarter of a billion dollars soon. There is hardly any other chef who is so internationally known. Its products are sold in large quantities around the globe. Jamie Oliver is committed to ensuring that children eat better and that a corresponding change takes place in our society. Jamie Oliver wants to use his very present voice, among other things, to do good. He also sits down while cooking Simplicity and Health. He uses natural, fresh ingredients. His 30-minute menus are particularly great. In just half an hour, the chef shows you how to prepare delicious healthy food.